How an aborted trip to the US gave birth to Jugmug Thela, tea desi style 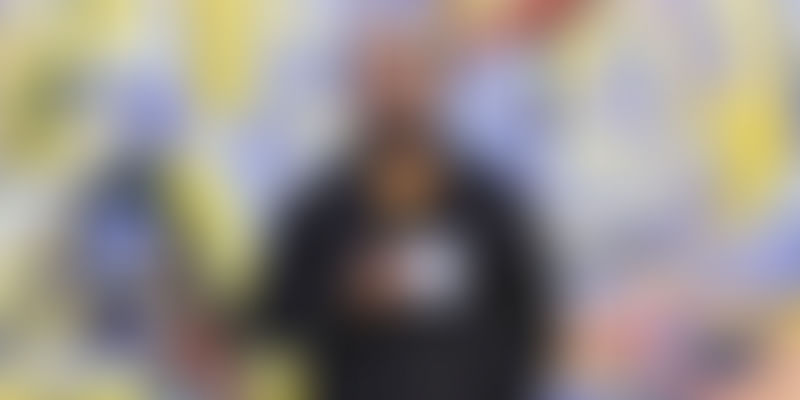 A graphic designer’s love for a perfect cup of tea fueled his desire to create a unique pop-up urban street-style tea stall, Jugmug Thela. Meet the startup’s chief chaiwallah, Jiten Suchede, as he takes us through his entrepreneurial journey.

Glass jars peer out of rustic wooden shelves. Their labels scream Vanilla, Cinnamon and a whole lot of interesting combinations of spices and herbs. The building itself is stark, almost industrial, yet there’s a warmth and intimacy about it. Elsewhere in the kitchen, you catch a whiff of chai as you enter – the only indication that you are at the office of Jugmug Thela, an artisan pop-up tea stall, in the artsy Said-ul-ajab neighbourhood in South Delhi.

Jiten Suchede, a graphic designer, is the man behind this venture that was born out of his obsession for drinking good tea. Having spent a few years in Ahmedabad, which has now become synonymous with chaiwallahs in more ways than one, Jiten fell in love with street-side tea stalls there that served potent concoctions of the humble chai in little kulhars. “When I moved to Delhi, I was really upset with the quality of tea here, and I kept telling myself I’d open a tea shop someday,” he says.

The next few years of his life were marked by acute tepidophobia (fear of a badly made cup of tea) in the UK, and that perfect cup of tea continued to elude him. Every time he was given a tea bag at a coffee shop, his heart would sink a little. There, too, he wanted to address the bad-tea phenomenon by setting up a tea stall. “I’d even mentally zeroed in on a location. On my way to work, I’d change tubes at the Piccadilly Station in London, and I’d cross this little tea shop that was always shut. I thought it would be a good idea to have my own tea stall right there,” adds Jiten.

However, despite being wildly passionate about tea, he hadn’t seriously considered becoming an entrepreneur yet. It was always at the back of his mind though - which is why when he came back to India. He caught up with his friends in Ahmedabad, and decided to start his own tea shop. But there’s a twist to the tale; he was planning to open one in the US! He was to fly to Serbia on work, and from there to the US, where he’d finally give shape to his dream. Alas, his trip to Serbia got cancelled.

“This, surprisingly, heightened my urge to start my own business,” says Jiten, “So when my friends were putting together a handicrafts mela in Delhi, they suggested I set up my own tea stall there over three weekends.” In the winter of 2013, Jiten put together a makeshift thela made of reclaimed wooden planks, got two people to help him at the stall, armed with a supply of spices and masalas he had sourced during his travels.

“We hadn’t given ourselves a name then, but we learned some key lessons that first weekend, after we ran out of supplies. We also realized that it can be nerve-racking to serve tea to a total stranger. At home, each of us liked our tea a certain way, so we weren’t sure about how it was going to turn out. Anyway, this was strictly a trial run, and in any case, I had a job as a graphic designer,” he says, “By the second week, we had a proper name: Jugmug Thela, and people loved our tea so much that they gave us hugs!”

Since then, Jugmug Thela has been operating as a pop-up stall at various high profile events across the capital – India Fashion Week, India Art Fair, India Design (ID), apart from corporate events, flea markets and organic farmer markets across Delhi and Gurgaon. Now they have a full-fledged menu featuring tea and coffee blends from across the world. “In a sense, the business has grown organically,” says Jiten.

“At the stall, we’d have aunties asking us for samples of our masalas and we’d wrap them in tissue paper and hand it over to them. Soon, we realized there’s a market for this; hence we started packaging our masalas. We are constantly sourcing teas and pounding new and interesting blends in our office. We have an inventory of over 180 herbs and spices in our kitchen,” adds Jiten.

One of the non-profits Jiten is associated with in Udaipur used to make nutritional cookies. He liked them, so he placed an order and sold them at the stall. Eventually, he hired new people and trained them to bake cookies. After three months of rigorous baking and experimenting, he decided they were good to go. The cookies were a big hit and Jugmug Thela now retails these cookies, too. All their products are natural, hand-made and chemical-free.

Throughout, the focus of the business is ‘artisan-ness’; it’s what sets Jugmug Thela apart from other tea and coffee shops, besides the urban street-side thela concept. However, the artisan tea and coffee sector in the country itself is evolving with several other startups in this space. “Artisan food is heavily process-oriented and relies on skill, freshness, authenticity, and this effort cannot be industrialized or mass-produced,” he adds.

“Our USP is innovation; pop-up has worked for us, and being ‘artisan’ gives us an edge. As a country, we are now beginning to respect the art of food and pay attention to the finer details. This is a major cultural shift,” he says. Which is why people are willing to pay more for tea and coffee.

As business scales up, costs tend to increase dramatically, too, and Jiten feels that he cannot be a one-man army anymore. He needs more skilled professionals who can focus on their core competencies. “We haven’t really outsourced anything as yet; our designers make tea; most of my employees are from disadvantaged backgrounds and we do our tasting and brainstorming sessions together,” he says. Jiten is toying with the idea of nested cafes, and he believes that personalization for the customer is more important than standardization for the company.