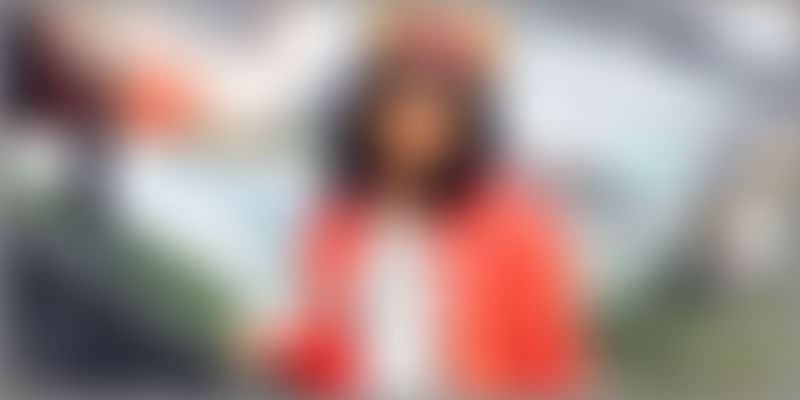 “At 30 I am still as agitated and as much a rebel when it comes to choices in life and the options for young people around me.”

Megha Bhagat is a CSR consultant and has over the past one year been working with young change makers, largely women, on giving them opportunities to create community impact. Her personal experiences and her work has taught her how limited spaces are for young women to achieve their full potential.

HerStory spoke with her about the exciting work she’s doing and what it takes to make your own choices and carve your own path.

This military brat studied in over eight schools across the country while growing up. An experience that gave her exposure to new people, life changing experiences and the ability to assimilate and adapt to new environments and people.

Kargil happened while she was in the 9th grade and the coverage by media, “only made me get that closer to the war alongside making me read about the international treaties and the relationship between the two nations. I took a call to study either journalism or law at my university level and pursued that dream through university.”

But that was easier said than done. Class 11th and 12th saw her fighting at two fronts– finding her identity as a growing teenager and getting an army father to see beyond his diktats.

She ploughed on nonetheless and went on to study law at Army Institute of Law for the next five years. These five years shaped her future decision of working in the social impact area. While studying law, her experience under Parul Sharma who was then a lawyer with Human Rights Law Network, left a deep impact on her. “I spent a few months with her working on range of human rights issues and learnt that I was happiest solving real world problems and creating solutions that impacted communities around me. When the university refused to let me pursue specialization in human rights law it was my moment of reckoning and I remember refusing to budge just because nobody around me was keen on learning more about the laws that mattered!”

Suddenly she was left without a mentor and found herself fighting a system that refused to provide resources and left her to fend for herself. This was one of the biggest challenges of her life. The university even called her father to come down to Chandigarh and persuade her.

It was the time when I had kind of started taking control of my life and really believed that I could make a difference to the world and just then being told that you are actually on your own isn’t the best thing to hear.

So she spent the next two years being a student ‘not on the rolls’ of the university, traveling the northern region meeting writers, social workers, photographers, and self teaching human rights law. “Those two years of being on my own gave me a deep sense of how young women need healthy influences, safe spaces to talk to others and a sense of independence and freedom.”

It was a time when she discovered a wonderful support system in her close friends and also in some of the amazing people she met in those days.

Megha went on to pursue a Masters (LLM) in human rights at NLSIU Bangalore, and spent the next two years figuring out what she did not want to do with her life.

“I was also figuring my space in the world with my own individuality, getting tattooed for example was a big deal for everyone while for me it remained an intrinsic part of how I defined my choices in life.”

Now with Consulting her family is still at a loss in terms of what it means for a stable life. “I don’t think I will ever be able to resolve that at home and while they are proud of achievements they will always be on the fence about the roads I travel. It actually makes a much stronger case for me when I talk to young people about their choices in life.”

A lot of Megha’s interest and love for social change also comes from her roots and her family. Both her parents were involved in welfare activities at every station they served. “I don’t remember having celebrated a birthday with peers rather going to the war widow hostel or the ASHA school run by army for its disabled children and donating in kind and spending the day with them.”

In 2010 she joined NASSCOM Foundation as a full time employee and spent her three and a half years at the Foundation growing steadily in the roles and work she took on.

position in the southern region. “I moved out of my comfort zone, setting up relationships for the organization but more importantly setting the wheels in motion for policy work with the Karnataka IT department.” Under the mentorship of Brett Sedgewick she learnt about having fun at work and taking on responsibility without doubting her abilities.In 2013 she joined the Rockefeller Foundation Social Innovation Fellowship and spent the year travelling with her group of 17 social innovators from across the globe. Her travels re-emphasized her belief that, “social impact work requires more young people joining the movement and staying in the system to change the world.”

Wrapping up the fellowship she realized she wanted to have varied impact with multiple organisations and took on freelance consulting as the next course of action. “I have seen how technology tools change how young women look at community problems.”

The impact that my work reflects is my biggest motivating factor and inspiring one young life stays very close to my heart. If I have to be able to impact one young woman around me I have to be doing work that inspires me and gives me more than enough motivation to continue doing impactful work.

Narratives of change for young girls

Based on her work experience, Megha says that there are three important narratives that need to change in India for women to find their own space. –

“Societal decisions of a woman’s life: At a very conservative estimate even if I don’t include the women living in completely rights denied states we still have a substantial number of women who do not get to decide about their choice of education, career, jobs or marriages.”

“No exposure to the right options: While the world seems to be increasingly well connected and networked it is not changing much for the young girls both in cities and rural areas. Young girls need access to the diverse options they have in their lives and the means to experiment early on with various alternatives. The opportunities they get to experiment with varied preferences are limited in scope and while we may argue that city girls have more options the access to those options is still drastically limited.”

“Access to Role Models: Young girls do not have timely and well-constructed access to high quality women role models to take inspiration from and make intelligent choices.”

How entrepreneurs can help young girls in India?

“Creating specific scholarships for girls in entrepreneurship, creating incubating labs in schools and offering yearlong support as mentors are a few ways that other entrepreneurs can support the rise of the new age young women entrepreneurs,” she says.

She also shares that when women come out and own public spaces, meet and network with young women in the city and send a strong message of solidarity and constant support to the young girls around them, then the issue of perception management around safety and sanctity of women is automatically addressed.

She further adds that it is pertinent that young girls have constant mentoring support and role models to work with during their early education days. “Every woman achiever who can impact a young girls life by giving her shadow support and encouraging every little idea that she might have will go a long way in effectively changing the course of direction she takes in life.”