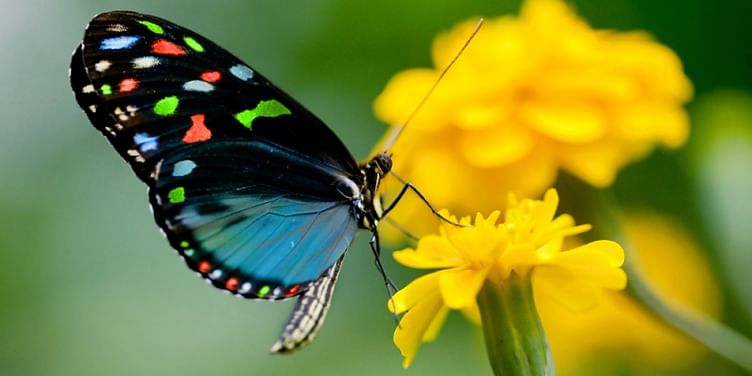 A tiny butterfly species new to science has been discovered in the verdant forests of the Changlang district in Arunachal Pradesh. The discovery of this butterfly christened as the Banded Tit (Hypolycaena Narada), was announced by state Principal Chief Conservator of Forests (Wildlife and Biodiversity) Dr Yogesh in Itanagar.

“This discovery underscores the unparalleled biodiversity of the state,” he remarked. The Banded Tit is a denizen of low-lying evergreen forests of Changlang and has an interesting life cycle. The adult butterflies live only for approximately two weeks in March every year, presumably spending a large part of the remaining year in a dormant state in larval or pupal stages, which are still unknown and the butterflies feed primarily on bird-droppings along cool streams in the forests.

Even if the butterfly species has been described and named, much of its biology is still a mystery, Yogesh said. For instance, its larval host plants, breeding behavior and precise habitat requirements are unknown. The Banded Tit was recently described in a research paper by Dr Krushnamegh Kunte, a research scientist and faculty member at the National Centre for Biological Sciences (NCBS), Bengaluru.

According to PTI, a new butterfly species called the Bright-eyed Argus (Callerebia Dibangensis) was last discovered in Arunachal Pradesh a few years ago. The discovery of the Banded Tit raises the possibility that many more species that are new to science still remain to be discovered in the remote mountain ranges and forests of the state and in the North East India as a whole, Yogesh added.