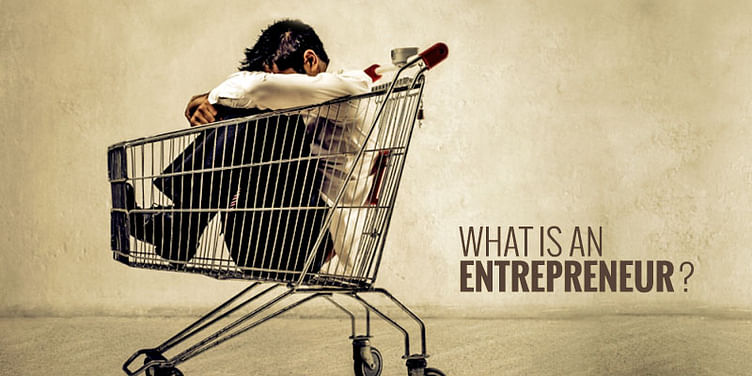 “All I know is that while I’m asleep, I’m never afraid, and I have no hopes, no struggles, no glories — and bless the man who invented sleep, a cloak over all human thought, food that drives away hunger, water that banishes thirst, fire that heats up cold, chill that moderates passion, and, finally, universal currency with which all things can be bought, weight and balance that brings the shepherd and the king, the fool and the wise, to the same level. There’s only one bad thing about sleep, as far as I’ve ever heard, and that is that it resembles death, since there’s very little difference between a sleeping man and a corpse”

When it comes to entrepreneur-consumer dynamics, the common ways to measure success or failure of an entrepreneur are the objective ones. They cover the aspects of pricing, consumer size, profit, growth and other boring terms. All questions covering these aspects are either binary or numeric ones, and are easy to address using a powerpoint presentation.

Entrepreneurs, however, would probably agree that the most important factors that measure ones success or failure are deeply personal, and are hence difficult questions to ask, let alone answer.

Take the example of those who find innovative solutions to the most pressing social problems. When Shubhendu Sharma, a Social Entrepreneur, started his organization Afforestt, the primary aim was not to make great profits, but tackle depleting forest cover and climate change. Using innovative new methods, the saplings they planted grew ten times faster and thirty times denser than a typical forest. The organization even went on to make their organic methods openly accessible to the public and help others grow forests in their backyard.

Those involved in knowledge production jobs like mathematicians, physicists and open source programmers also fall into this category. Take the example of a fictional farmer, who uses innovation and skills to invent new methods of irrigation that save water. He would not be called an entrepreneur in common parlance as he has no established company, no patent, and no access to the nearest Starbucks coffee. He might just go around telling people about his creation without expecting anything in return.Now, if a larger community starts following his procedures and finds it profitable, then is it not his innovation that was profitable, albeit to the community rather than personally? Did his product not change people’s consumption patterns as well as incomes? Is it not his vision that is manifested? More importantly, does he not feel proud of his accomplishment? Is he not an entrepreneur, then?

Although our farmer is not a billionaire with books written about him, he has created something which is being used by a number of people and has made their lives easier. He does not sell his product but when people, or his consumers in the current discourse, use his methods, they know where the credit is due.

He does have a consumer base, just not in the accepted sense. Here what we see is that he does not cater to consumerism but does something more elementary, more pristine. He adds value to society. This is different from the prevalent notion of an entrepreneur where we believe that he reinforces consumerism, a belief which develops when we read the narratives of Apple or Flipkart. But aren't the lesser told stories equally important?

The question we might ask here is, when looked from a subjective standpoint, how do we differentiate between the two entrepreneurs - one who makes millions and the other who gives away his idea for the larger cause and moves on? Wouldn't every entrepreneur seem to be equally successful?

Well, let's admit it. We can't. The subjective measure proposed across the series of essays on the philosophy and psychology of entrepreneurship, does not entail a comparison between two entrepreneurs as an objective measurement would do. We do not have an absolute zero here, and therefore when we embark on measuring success subjectively we speak about perceptions. The comparison is not between an entrepreneur and another but is one between his vision and the product. The embodiment of an entrepreneur’s philosophy or its manifestation in what he delivers gives us an idea of his success.

Comparison between entrepreneurs on absolute terms is futile too. Entrepreneurs collaborate much more than they compete. As discussed in a previous essay, a city emerges as a startup hub not necessarily due to a lack or abundance of competition, but because it provides collective knowledge and space for collaboration, among other factors. Each entrepreneur has his own views, ethos and philosophy and works towards manifesting them into his creation, and with an equal importance, his consumers too.

The relationship between an entrepreneur and his consumer is a tricky one. It is quite evident that an entrepreneur does not necessarily cater to consumerism, the way we perceive it.

During my radical days, I believed that we are customers as long as the business needs us. The moment we need a business more than they want us, we turn into consumers. Well, let jargons be bygones.

Systematically, consumerism can be approached from two different standpoints. From an economic perspective, consumerism is an ever expanding need for consumption. But using a socio-political approach, consumerism has also been used to refer to a consumerists' movement, which focuses on consumer protection, awareness and activism. Here the term ‘consumer’ is more of a social construct than a business term. Although the two approaches are not necessarily contradictory, understanding the conflict between the two might help us in differentiating a large corporation from an entrepreneur.

As Alain de Botton puts it, consumers talk enough about low prices, but rarely look with scepticism towards how the prices were lowered. Was the labourer exploited? Was the environment compromised with? Were substandard raw materials used? Botton uses a term - 'just price' - a price which correctly factors in the true cost of production, and is usually higher than the prices generally offered.The recent Maggie debate clearly shows how negligent consumers can become when the general purchasing force is driven by prices and numbers and not quality. When it comes to hair shampoo products, the developed world is more aware of the harmful effects of Sodium Laureth Sulfate (SLS), and hence has an array of alternatives available. However, in developing countries like India, almost every shampoo contains the toxic chemical. This lack of consumer awareness leading to consumer exploitation theory has proven its validity in many consumable goods, including cosmetics, electronics, processed food, detergents, fertilizers and GMO crops.

Entrepreneurs, on the other hand, are often financially tied to play the quality card. Most entrepreneurs will agree that their means of production can never match the automated assembly lines of a big corporate player with deep pockets. Entrepreneurs are more agile, and often rely on local consumers who are aware and willing to shed some extra cash for a utilitarian maximization. An entrepreneur, instead of exploiting his consumer, often takes the more financially viable and moral approach and makes his consumer more and more aware.

It is no wonder that the SLS free shampoos available in India are primarily manufactured by small businesses and are not competitively priced. The same logic applies to organic food, and other healthy food products, especially in the hyper-local space. Small publishers being more quality centric, small food tech startups being more efficient are other examples. In certain cases, since consumers know the entrepreneur personally, imagine what they would do him next time they spot him on the street if an insect is ever found in his noodles.

Finally, we must understand that the approach an entrepreneur takes towards his consumer, which is much more socially and morally right, is not necessarily a social or moral decision. The entrepreneur versus big corporate story is not a good versus evil one. If made financially viable, and if his consumers do not know him personally, an entrepreneur might as well succumb to similar customer exploitation, but is less likely to happen because of the way things work.

A good way to explain how entrepreneurship leads to greater consumer awareness is to take the example of Bollywood. All of us might agree that 80's and 90's were the worst decades in Bollywood cinema. What we often fail to realize is the stagnation and lack of alternatives during the decades. Among other factors which led to such stagnation, a major reason was Bollywood being loaded with the same actors, directors, lyricists, music directors and playback singers during those nostalgic times we grew up in.

Compare those times with today's Bollywood. Today, every other film has a new actor, a new director, or a new music director. We have more lyricists and playback singers than ever before. With a more open, diverse and enterprising film industry, talent is naturally flocking towards it, without openly challenging the established film-makers. Instead, the established authorities of cinema, or 'camps', as we call them, are under a continuous pressure to look beyond accepted formulas and innovate for the growing quality hungry audience, causing a positive reinforcement. With the wall between mainstream and parallel cinema slowly breaking down, one might as well agree that these are exciting times for Indian cinema.Now replace Bollywood with the market, established 'camps' with corporates and a new film-maker with an entrepreneur and... well, you get the point.