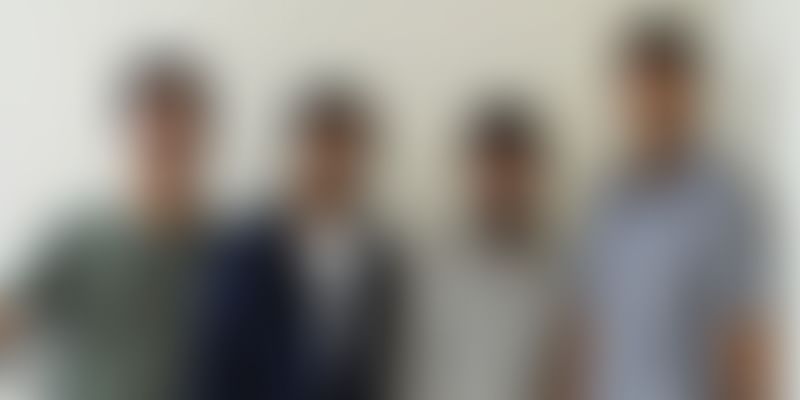 If as a startup you've been looking to hire talent on a freelancing basis, you would realise it isn't an easy task. There are several factors like quality, timeline and connectivity at play. To solve this basic problem startups face, Pankaj, Sunil, Shiva and Pradeep started Hirenodes, a hyperlocal marketplace to connect freelancers with companies and vice-versa.

The foursome were working as a team for over three years developing SaaS and PaaS mobile systems at July Systems. It was during this time that Pankaj realised every organisation faced hiring issues. After some research he understood that referrals formed the best source of hires.

Soon, the four began building referral-based platforms for various clients and became part of TLABS, the startup accelerator and seed fund, and started building a referral-based platform. Unfortunately, as they had to depend heavily on social media platforms like LinkedIn and Facebook, they had to shut the referral programme. However, they discovered that all the startups around them had issues hiring freelancers.

Hirenodes is the team's third startup and in their previous ventures, they had used the services of freelancers. Pradeep adds that they struggled to hire a logo designer and content writer for their previous startup. They posted freelance requirements in multiple sites, but couldn’t find a good freelancer to complete the task. They had five cancelled tasks and refunds from five-star rated freelancers.

None of the existing freelancing solutions were helpful and most individual freelancers were not active on the freelancing sites. "We knew immediately that there is a huge void in the freelancing space, and we needed to find out if our initial hunch of freelancing issues is a real problem," says Pradeep, cofounder, Hirenodes.

They spent some time on customer discovery, spoke to more startups and the problem was clearly present for many organisations. The team decided to solve it by connecting local freelancers directly to employers. Pradeep says that it was easier to connect with a freelancer near you, speak to them directly and, if possible, hire someone who can work out of the client’s office to complete tasks.

According to Pradeep freelancers are the best option for early stage startups, in completing niche, short-term tasks. He adds that start ups most often do not have complete clarity of tasks and need resources that can work with some degree of agility. Since they are pressed for time, they will not have detailed documentation to handover tasks to a freelancer as well.

"Startups often need freelancers to closely co-work with them or be on call to complete tasks. Remote freelancers can be very difficult to work with, given the time zones and coordination challenges," says Pradeep.

"After few debates and conversations we decided to follow our heart and enable freelancers to become part of the startup bandwagon," says Pradeep. During the discovery phase, the team spoke to several people and entrepreneurs, but they were skeptical of the idea. "They are right in that there are lots of challenges involved in developing a marketplace solution," says Pradeep.

Once the core team was formed, the Co-founders decided to launch an MVP to test their hypothesis and launched the first version of the app in less than two months.

The company launched the app mid-June and currently claims to have more than 1,000 downloads and more than 150 jobs being posted on the app. Pradeep says that the best part of the app is the daily engaged users. He adds they have close to 70 active users on the app.

"We have been consistently getting a five-star rating in the app store. The app users are not limited to India only; the app has generated interest in more than 25 countries, from where we have downloads. The need for a better freelance solution is certainly global and not limited to India alone," notes Pradeep.

They have received several enquiries on when their iOS app is slated for release. “We have connected few freelancers offline to jobs posted, since they did not have an Android phone and were interested in opportunities we had posted on our Facebook page,” says Pradeep.

Currently the app is free for employers and freelancers, and freelancers get to keep all they make. The team intends to introduce a payment option when the platform matures to solve the freelancing problem completely. "We are still a few releases away from reaching that goal," says Pradeep.

"We have invited freelancers to share their experiences, to help others build a successful freelancing career in India. We are looking at a huge roadmap from a product perspective, but will get to it one feature/release at a time," says Pradeep.

New Delhi-based TalentPad (previously TalentAuction) has raised an undisclosed amount of funds from Helion Advisors. Currently, the startup is working with 150 companies, including InMobi, MakeMyTrip, Snapdeal, Myntra and BookMyShow.

Tarun Davda, Director, Matrix Partners, says, “India’s search and recruitment market is USD 1 billion and it is growing at 20 per cent CAGR. The key opportunities in online hiring are sourcing and matching of high quality, passive candidates to companies.”

Speaking on the same, Venkatesh Peddi, VP, IDG Ventures (India), adds, “Online hiring space in India has not seen much innovation or disruption in the last eight to 10 years. But in the last couple of years, the industry has witnessed the entry of several startups which are working on different aspects of recruitment function, to bring in more efficiencies using technology and disruptive ideas. We estimate the overall spend on technology around recruitment in India to be about USD one to 1.5 billion in annual revenues and is expected to grow to USD four to five billion by 2020.” (Source: YourStory)