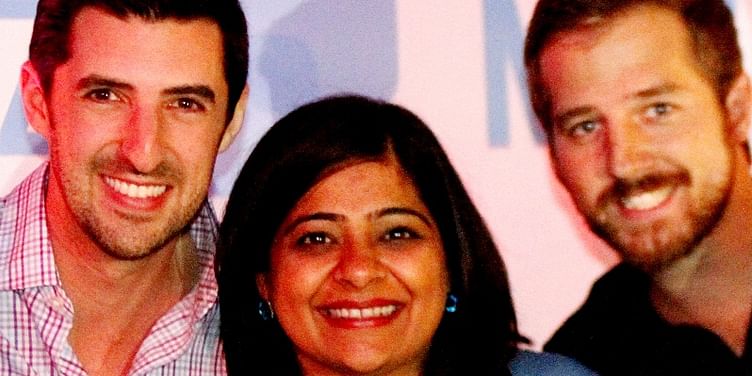 Entrepreneurs start out with their MVP (minimum viable product) and go through the alpha and beta launches to improve it further. When the product is officially launched, most entrepreneurs ensure that, along with functionality, their product is visually appealing, has a simple user interface without a steep learning curve for the end user. This, in turn, ensures ‘stickiness’, without which people may get bored and abandon the product, unless it is critical for their day-to-day use.

While many products and services have evolved over time, Shikha Arora and the other cofounders at Lynx found that link sharing over email was the same as it had been since the beginning of the internet. Shikha says,

Since the 1980s, we have been simply copy-pasting links in email and sharing it with our friends and family. With Lynx, we want to make it easier and a more visual experience.

Users also have the option of saving links they wish to read later, by clicking the ‘favourite’ button in the Blue Lynx tab, or by pasting their desired link in the bar provided, across both blue and green tabs. Users can share links with friends individually or with a group that is on the platform.

Lynx includes intelligent sharing features and shows users who they have been sharing links with often and displays their name first. The app also has extension tools for Google Chrome and Apple’s Safari browser and users can share links through them.

Lynx originated as a feature to an existing product while the team worked on Maz, a mobile publishing platform used by Condé Nast, Forbes, USA Today, and other media companies. They implemented Lynx on the Maz platform as a feature and, encouraged by the success, thought of spinning the idea with a separate standalone product, as a private sharing app for links.

Paul Canetti, Shikha Arora and Simon Baumer are the founding team members at Lynx and MAZ. Paul functions as the CEO of Lynx. He had previously worked as an interface designer at Apple and has designed over a thousand apps. He focuses on the intersection of technology and media and also works with General Assembly to consult corporations such as Walmart, Staples, and American Express relating to user experience and entrepreneurship.

Shikha is the CTO of Lynx and had spent six years working as an engineer at Adobe Systems, architecting facets of their InDesign software. Simon is the CIO of Lynx and a web developer by profession. Simon and Paul were both among Inc.'s ‘30 Under 30 World’s Coolest Young Entrepreneurs’ in 2013.

Lynx is active on both web and mobile (iOS only for now), and has seen about 1,00,000 downloads. Going forward, the team aims to focus more on the mobile app, but maintain a presence on the desktop at the same time. They currently have a core team of six people spread across USA and India. Shikha says,

We've been working on this silently for quite some time now, before launching it to the public recently. The app was created from scratch by our awesome team at Noida. In terms of functionality, the app is slightly more advanced by one or two iterations, with the web playing the catchup game.

There is a big market for utility tools that are visually appealing and help people get their work done faster and in a more convenient way. Slack, once termed as the ‘email killer’, decreases reliance on emails as a primary form of internal office communication. It has, so far, raised USD 340 million in funding and made two acquisitions. Delicious, a social bookmarking platform for links was acquired by Science Inc. in 2014 for an undisclosed amount. Pocket, which allows users to save and retrieve links, documents and videos offline, has so far raised USD 14.5 million across three rounds. Lynx aims to do for links what Instagram did for photos. Shikha says,

Related read: 5 productivity tools that every startup must know about

The app and desktop versions are free to use. Shikha confirms that they plan to monetise through B2B channels only, and keep the service free for the end user. Their monetisation strategies include native content advertising within the app. Lynx is also running pilot programmes with a few major publishing platforms, as an enterprise tool for link sharing. Shikha says that these companies have made Lynx mandatory for link sharing to decrease reliance on email and also prevent clogging of inboxes.

With its main headquarters in USA, Lynx is currently in the process of raising a seed round of funding and plans to utilise it to mainly market the product to more people, and also launch and seed an Android version of its app. Shikha adds,

Our initial focus will be the US market, which is generally more willing to try new products and adopts them faster. But going forward, we plan to expand to more geographies based on the demand and interest that we see globally in different countries.

Related read: Indian smartphone users spend on average 169 minutes per day on their device and can be categorized into 6 personas