The Woman behind ‘You are My Sonia’: Merlin, the Musical-Magician 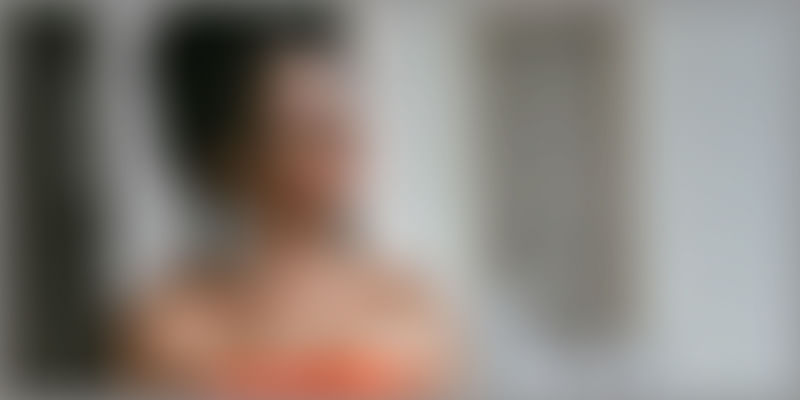 If you are a 90s Indian kid, you’ve subconsciously hummed ‘You are my Sonia’ through more years than you would like to admit. Haven’t you always fancied the person behind this particular song to be someone as spirited, feisty, and teeming with joie de vivre as Kareena herself?

Merlin D’Souza turns out to be just that. She’s a prodigy pianist turned music professional who has laid her hands on everything one can do in the musical spectrum- be it singing, composing, producing, arranging or playing an instrument for that matter.

Her bustling studio in Bandra, a suburb in the heart of Bombay where she grew up, is a soothing chaos of melodies and notes. She has more than a full plate right now, what with her all-girls band ‘Indiva’, her venture with a fellow veteran musicienne and her solo album all on the anvil.

Leading to the room is a hallway lined with paintings commandingwonderment – of giant white doves with open wings, of gleaming suns, of heart-warming medleys of colours, of abstract renditions of letter M. It turns out, all of these were basically extravagant client testimonials, that is, gifts from happy partners who sketched the Merlin they loved working and associating with so much, as a token of appreciation. The hallway kept reminding her that “A career is also a place where one must build deep and meaningful relationships.”

“Let’s start with the first deep relationship of your life.”

Turns out, the roots of her work as well as her personality can be traced back to a jolly-good childhood spent in equal parts in Goa and Bombay.

“Mom and dad are from Goa. Every Goan has at least a piano, a trumpet and a violin. We are all forced to

learn music, rather than study. We bought a piano when I was six. Without being taught, I was playing it away to glory, when my dad realized I was gifted.”“I was an all India radio artist at 8 – In fact, my mom used top bribe me to play on AIR with a new dress. No one could see my dress on radio, of course- but I’d fall for it every time! Either that, or those ribbon sandwiches and a little glass of wine at the corner church, that always had me excited to perform. I belonged on the stage!”

“Lucky for me, Goa as well as Bandra were rich with full of community, churches and chapels, Parishes… Never a dull moment. Always enough chances to discover my talent.”

But the plot thickens. She was not only born in adverse conditions against all odds, but as a child, she also lost her father and went on to develop a rare bone condition called Osteoporosis- making her bones too brittle and fragile. “I stayed out of school too much, couldn’t give music exams, as my knuckles would be frozen. My hands were my living, so I was worried sick. I couldn’t play the piano for months on end.”

Mom said, “Why are you working? Make music!

“I’ve been supremely inspired by my mom. We lost our father at a young age, so my mum raised 4 kids, had two major open heart surgeries, yet, became her school’s principal. If she could do it, what was I waiting for?”

“You’ve been a survivor right from when you were in my belly, she would say. So make the life god gave you, count! Even as others kept saying a career in Music is risky – which almost made me study public relations and get a job in the field- my mom exploded, ‘Why are you working? Make music!’”

Is it another one of these relationships that led her to her big break in Bollywood?

“Even as a kid, I’d experiment with songs from the Beatles, ABBA, Beethoven – I’d merge them and do something nuts and crazy. That became my style- World fusion. I was put in formal training in the form of Trinity. Soon, a dear friend, Sandesh Chandalia, told me he’s doing K3G and asked if I wanted to be his arranger. I jumped!”

“We dubbed with 40 singers to do ‘Keh do na, you are my Sonia.’” I wrote the ra – and even before she completes her own sentence, she breaks into the “She’s the one I want, she’s the one I need…” all expressions, pouts and frowns, rapper maneuvers galore! This new, animated and childlike side of her had started to emerge, as she recalls her stint with Showbiz. “I did Road, Socha Na Tha – it was all uphill from there.”

Breaking Down other Doors

You spend 5 minutes with Merlin, though, and you just know she wouldn’t have settled for just Bollywood, and instead, continued to expand her horizons. “In that proverbial rat-race in Bollywood, I was giving up on who I really was- which is a pianist. I took a break and switched to advertising, performing recitals and doing corporate tunes and shows. It was all part of the dream.”

The phone kept going berserk and work kept swarming in, enough to let her open her own studio. Arguably, the Bombay dream. And indeed, a little piece of her heart embellishes every corner of the space. The chairs are worn in- with presumably months’ worth of burning the midnight oil. State-of-art as it was, it still managed to showcase her evolution. “I live here – at my little musical pad- where I ideate and let my musical sensibilities lead to fruition, hopefully.”

Lone sheep in the pack of wolves:

Fruition was destiny, yet, the path to it wasn’t golden and gleaming. “There are very few women in the country who dabble in all these genres. In the ad world, more than 90 percent of the arrangers and producers are men. There are female composers, but I would love it if they had a holistic approach to music. That would command more respect. Just like abroad, where an artist spends time learning the entire art. Just doing playback for Bollywood gives you your own niche, but if you’re a musician- you have a far bigger range, and far better prospects.”

Was working for theatre different?

“Honestly though, theatre is the real battlefield. It is what has bred the greatest talent, and conversely- the greatest stars come back to theatre to put their skills to a true test. Same goes for music and underscoring for Theatre. It is more exhilarating. Not to mention gratifying, working with greats like Naseeruddin shah and Noel Gordon.”

Merlinprefers not to call herself Goan, but Indian. “India’s such a crazy rich, and diverse canvas- I’ll take

four lifetimes to soak it all in.” She endeavours to embody that passion into her work. Soul Yatra is her own album, which was part of her self-exploration. With part 2 in the factory – she beats down on that piano as fiercely as ever to conjure a resonance of her roaring spirit.Her “Suno” in fact, which catapulted her into the limelight, is a song about that very unbreakable spirit of a woman, which she wrote and produced with her All-girl Band Indiva- while protesting the December 16, 2012 gang rape. Calls streamed in from London and Berlin, inviting her to perform and help translate the song.

Another pet project is her combined exploits with India’s leading Thumri exponent, Dhanashree Pandit Rai, a colleague with a contrasting set of skills and fortes, who she will medley with in an album called, “Let’s merge: Do re MiFa, So, La Ti, Do.”

Doing this much at once is a typical month in the life of Merlin– and what keeps her in the circuit.

I want to be Merlin the Musician:

There is quite the line-up of awards and trophies adorning her corridors. The most staggering honour, presumably, would be being dubbed as the Female Rahman of the country. “I am likened with him because we’ve both had the same range in our career- not having stuck to just one aspect of making music. I feel blessed and utterly humbled. Yet, someday, I just want to be known as me- Merlin the Musician- and that, itself, should entail a legacy.”

Part of leaving behind a legacy is inspiring her peers as well as the batch of budding artists, who, she feels, have the world at their fingertips, what with advancements in technology.

“We have had to go through the grind. We had to knock on studio doors. Things have become so easy, just put the laptop on and you have softwares which will underscore for you. You just need the talent, and the world is already an attentive audience with Social media.”

She prepped and propped up Penny Vaz- the girl who went on to create the Yehihai right Choice Baby commercial for Pepsi. That gratification is what she seeks now, by having a workshop series and training programme for pre-teens, in the pipeline.“Kids must go through the grind of going acoustic, raw and natural, rather than going for the gizmos. The beauty is still in having a little guitar and singing in front of the mic.”