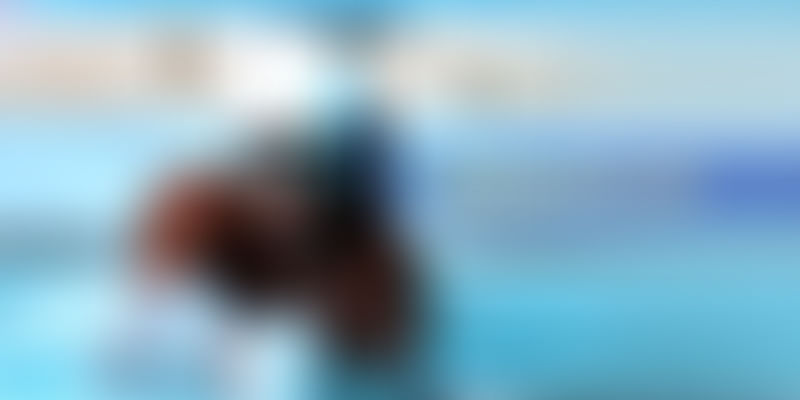 I shall be telling this with a sigh

Two roads diverged in a wood, and I—

I took the one less traveled by,

And that has made all the difference.

Born with a deformed left hand, Sharath held the zest in him of being a part of the Indian Army. But round the corner was another road waiting for him to be taken. His school had made swimming classes mandatory for everyone. Sharath narrates,

“Somewhere, I said that I can’t swim but it was mandatory. My parents were rather more worried since they never knew how to swim. According to them, when the abled didn’t know how to swim, how could the differently abled?”

But he chose to take the road less travelled. “Yes, it took much longer,” he says, but he is glad he did it. Today, Sharath M Gayakwad is a Paralympic swimmer and the only Indian to have broken P.T. Usha’s record for the most number of medals at any multi-discipline event at the 2014 Asian Games.

What is ironic is that this master stroke came right after he was all ready to give up. In 2009, he suffered a shoulder injury and it was excruciatingly painful to train with every lap. By 2014, the pain took over and an early retirement was on the charts. But Sharath never gave up. He recalls,

“In the ninth standard, when it came to deciding what I wanted to do. I had already made up my mind on swimming. The more I swam, the more I loved it. I knew this was it. It doesn’t matter what disability you have, you just have to try everything at least once.”

Being the first Indian to compete for the Paralympics in 2012, he received an Arjuna Award in 2015 and is pursuing his dream of being a coach at PM Swimming Pool in Bengaluru.

While their story might not be as compelling, this couple is also aspiring to be different and take the long route to success. When others parents have aspirations of having an engineer or a doctor in the family, Shantala Bhat and Santosh Patil are striving to pursue their son’s (10 year old) interest in swimming to a competitive level.

Zeroing down to PM Swimming Pool Jayanagar, Shantala and Santosh sent their 10-year-old son Utkarsh to coach under Sharath. Soon, the discussions post training led into a bunch of ideas. These when hosted as a pilot at the PM swimming center was very well received by all athletes, parents, and coaches. This marked the beginning of Gamatics.in with Sharath, Santosh, Shantanala, and Margaret John Christopher as the founders of the startup.

At present, the venture is focused on fulfilling basic requirements of swimmers by providing a marketplace to order high performance practice gears and equipments. The platform also lists nutritionists and physiotherapists, aiming to bring the community together through sharing ideas and recognizing talents at every state to bring out the best in them.

Incorporated in November 2014, the startup applied for incubation at NSRCEL, where their idea was well received and they got incubated in February 2015.

According to the co-founders:

“Through Gamatics, we wanted to provide high end equipment to athletes, which they were importing otherwise. Athletes who bring pride to the country lack standard products for practicing, high end products for competitions and the right consultations from sport nutritionists and physiotherapists. Our strategy is to first get more customers onto the platform through the marketplace before we launch our analytics engine.”

The analytics platform would be the primary offering from the enterprise tracking and analysing an athletes’ performance.

Explaining the reason of introducing analytics, Sharath tells us,

“Most coaches in India still measure performances manually. Athletes tend to complete their laps, and write on this huge diary which is checked by the coach at the end of the day. Thus, there is no comprehensive mechanism talking about the improvement of the athlete.”

Through the analytics platform, Gamatics.in will help take all the data online. Once a competition is concluded, the lap timings for a particular athlete will be maintained online offering comprehensive graphs depicting his or her performance.

Santosh tells us that the venture is also looking into developing biomechanics and video analytics which will capture the posture and the technique of the athlete in real time giving the coaches a better insight on improving performance. Looking at functioning on mostly mobile phones, the founders are also seeking to venture in to the wearable technology space.

Currently, this team of six is working a pilot with five swimming coaches and 100 odd athletes on their analytics platform, which they plan to launch by the end of this year. Further, the founders express interest to open the platform to athletics as well since it involves similar workouts and nutrition.

On a revenue front, the startup has a varying percentage split of a certain product sold, which gets divided between Gamatics and the vendor respectively. With the above revenue model, the firm clocks in revenues of Rs 4-5 lakhs every month.

On asking whether the firm will introduce a revenue component to the analytics engine, the founders fervently deny. They say, they would rather work on creating an extensive database of swimmers and sell the data to investors who plan to invest on the sporting talent in the country.

Since the launch of their marketplace in April 2015, the platform has an active network of 400 athletes purchasing from them accompanied by a repetition rate of 15-20 per cent. In terms of orders, the firm has grown from billing 30 orders in the first month to 85 in August, 2015.

The founders tell us how the positivity amongst the sports community keeps them on their toes. Their philosophy is to equip athletes with an edge, while they put in their sweat and blood for country, helping them prove themselves on large podiums.

Concluding by sharing their learning, the founders say,

“When one is passionate about bringing in the change, things will fall in place. We never imagined that Gamatics could be a reality. The biggest mistake people do is by considering and treating sports community as corporate community. Sports include a different league of individuals who don’t see money as their primary requirements. Our biggest aim is to make sports mainstream where it is taken as academics and introduced in schools and colleges.”