Born in a steamy Sindhi kitchen more than two decades ago, Reshma Sanghi’s love for food is still going strong 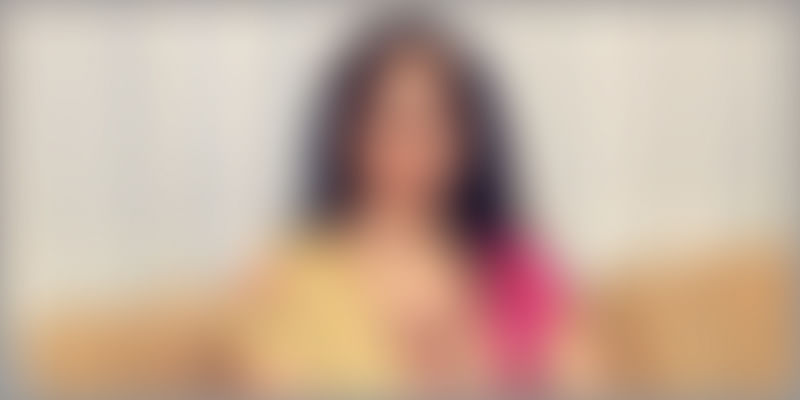 Love what you do, do what you love, and success will follow.

This is the motto that has seen Reshma Sanghi succeed in the last two decades.

From baking and catering to cooking classes to a coffee shop and now entrepreneurship with Out of the Box, Reshma’s journey with food has been an exciting one. HerStory spoke with her about her many avatars in the food industry.

Growing up in a Sindhi household

Born into a middle-class Sindhi family, Reshma had a great childhood. She finished her Class X in Delhi, before she moved to Mumbai for her graduation.

While growing up, eating Sindhi food cooked by her mother was an integral part of her life. “My mother was a fabulous cook and the focus was always on food. ‘What do you want to eat’ was the question we looked forward to through the day! It was wholesome, nutritious and delicious, no-frills Sindhi food. This wasn’t because we were a ‘foodie’ family, but because we didn’t know or want anything other than my mother’s cooking,” remembers Reshma.

I always felt that the food was amazing because my mother cooked it. The simplest dal or subzi was full of flavor. Till this day, I can’t replicate the flavor or the taste and have stopped trying to. My daughter tells me now that whenever I cook something for her, she relishes it more because she can taste the ‘love’. And that’s the greatest joy I take out of cooking,

Reshma got married to her college sweetheart at 22 and joined the family business. She stopped working four years later after the birth of her son. “That was when my food journey began, 23 years ago.” Being at home gave her the opportunity to experiment with food everyday and from there her interest grew. “I didn’t know how to cook at all when I got married and I used to frantically call my mother to ask her how to even make rice,” she says with a smile.

A bakery course and some private cooking classes during that time gave her the skill and since she was in charge of desserts for family dinners and parties requests for supplying cakes and desserts soon started pouring in.

In 1994, Reshma’s daughter was born and since both her kids were small she continued to bake from home, as it did not take up much of her time. “My catering has continued since 1994 to date. I still cater but have a much wider selection of items than what I started with.”

A few years ago, Reshma’s friends who were opening their bookshop, KitabKhana, in Mumbai approached her. They offered the coffee shop which was to be a part of KitabKhana for her to run.

“It had been a dream of mine when I was a child to set up a café surrounded by books so the decision wasn’t hard to make. We started off with baby steps, gradually learning the ropes of the restaurant business, making mistakes along the way, and just enjoying ourselves on a daily basis.”

Her husband who was in the IT sector was happy to hang up his suit and is a part of the Food for Thought Cafe. It took them two years to find their mark but now they enjoy a cult status among the office crowd of the area.

Out of the Box

Reshma started sporadic cooking classes in 2000 but regular weekly cooking classes started in 2010 and continue to date. It was from here that the idea for Out of the Box was born.

“What started as an ingredient box for the weekly classes for cooking enthusiasts to convert what they learn in class into a gourmet meal at home took the shape of a venture,” she says.

Out of the Box delivers an easy-to-follow recipe along with all the required fresh ingredients /condiments and step-by-step instructions card to cook a healthy gourmet meal for two in 30 – 45 minutes in Mumbai. The orders are placed through the website and over the phone. The company’s app will be out soon.

“It took three months from when we conceived the idea to when the first box was delivered. It took us some time to decide what kind of food we wanted to deliver, how the deliveries would be carried out, and most importantly how the box itself would look and function,” Reshma says.

With her team of 20, she says, their value proposition of great food at affordable prices served in a comfortable environment has kept things steady and the business growing.

The biggest challenge she faces is the high turnover of staff in this business. “There is no easy solution but we have managed to retain our core team members,” she adds.

She is a big fan of chefs Jamie Oliver and Yotam Ottolenghi because, “they both focus on an uncomplicated style, with just a few but flavourful ingredients. That’s the way I design my recipes too. I love Chinese food, fried rice being my absolute favourite, and simple home food.”

Her children are her source of motivation. “They were my guinea pigs while always ready to try new things, especially if it was covered in icing! Now they’re my biggest critics,” she laughs.

Her mother’s cooking has been close to her heart and she wishes she had spent more time in the kitchen with her mother, learning Sindhi recipes.

Reshma’s association with food has been a long one and it has grown and changed with times and technology. Talking about the tremendous impact technology has brought to food, she shares her inputs. According to her the change in the last five years has been enormous.

The industry’s exploded globally in a way that I couldn’t have imagined and we’re slowly starting to see the changes in India as well. Whether it’s new tech-inspired startups that let you order food with the touch of a button or shows like MasterChef that are opening people’s minds to how wonderful and weird food can be, people are becoming more adventurous with the food they want to eat and more savvy with the channels they use to access their favourite dishes,

She adds that, “like most industries in the ‘smartphone economy’, technology has opened doors that just didn’t exist before. We’re seeing more restaurants in Mumbai alone experimenting with flavours and molecular gastronomy; we’re seeing people catching on to the ‘food truck’ hype in the West; and we’re seeing startups like ours that are trying to make it easier for people to move outside their culinary comfort zones. These are exciting times, “Reshma exclaims.

Taking the cue from all the present developments, Reshma is aware that the food industry is ripe for innovation, and she wants to explore a number of different avenues.

“Our priority right now is to establish Out of the Box as a brand and a reliable solution for the everyday cooking problems in a fast moving world. As for the future, we’re happy to continue looking for our next venture and a way to extend the brand that we started over four years ago,” she says.