Growing weekly at 20 per cent, ex-Flipkart employees’ Roadrunnr is hungry for more 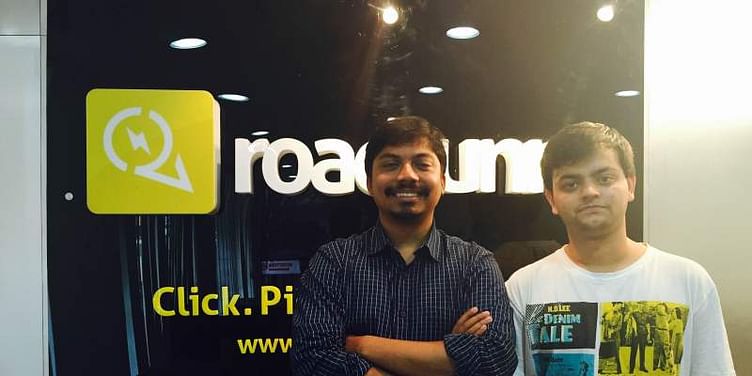 It's 5:15 in the evening and the bustle of activity at the Roadrunnr office begins from the basement. There are close to 100 delivery boys seated on chairs, holding their forms and waiting for their turn to be a part of this B2B online hyperlocal logistics startup. And the level of activity just doesn't stop at the basement. I get a passing glimpse of activity of every floor in the office. It's hard to believe that Roadrunnr was started only six months back.

Over these past few months Roadrunnr has seen several milestones. "Everything is very new; there is so much to be accomplished," says Mohit Kumar, the Co-founder, sitting comfortably on a bean bag. Roadrunnr was recently funded USD 11 million by Sequoia Capital, Nexus Venture Partners, and Blume Ventures. But the story doesn't begin here; or even end here.

The game begins with a problem statement

It all began at a mobile hackathon at Flipkart in December, 2014, where Arpit Dave and Mohit were colleagues and team mates. The duo began by thinking about why logistics was an expensive proposition. "Transportation was an expensive affair before players like Ola and Uber. They removed the middlemen and directly connected the demand with supply. Logistics needed a similar model," says Arpit.

During the hackathon, the duo realised that the fulfillment and logistics space was fragmented. They thought, when a player like Flipkart was already bringing together demand and supply in terms of e-commerce, why not play along the same lines for logistics.

The duo also analysed that most of the logistics players in the market were following the intercity logistics process for an intra-city model. This, according to them was outdated. "Why do you need middlemen and central hubs in intra-city logistics; you just need to pick it up from the merchant and drop it to the customer," adds Mohit. Once they solved the problem statement, they realised that this could be made into a business.

Changing the game in 15 days

After brain storming for a couple of months in February the duo started Roadrunnr. Arpit says that they realised that hyperlocal commerce would be big in the months to come. For the first 15 days the duo were working on a full stack model, but soon they realised that it simply wasn't scalable. "To get a merchant to take you seriously, it's important for him see some value in you. It's important that you solve a problem," adds Arpit.

Just a week before launching their platform based on the full stack model, the duo realised that this model would affect their initial problem statement of solving the fulfillment issue. "We decided to then use the work done for the customer face to make the B2B model stronger," says Arpit.

The duo was clear that they would launch the product early on. They say that once they got the MVP out they decided to hit the market with it. Arpit says that the duo knew that they wouldn't have the perfect product out in the first go. Thus, the first order of business was getting the technology team in place.

The duo was joined by friends, and friends of friends.

The heuristics were built around an overall view of what could possibly go wrong, what could be solved, and what were the roadblocks one would face.

Most of the things are easily fixable. You solve exceptions on the basis of trial," says Arpit.

Learning what not to do

"Selling is a different ball game," says Arpit. In the initial days, Roadrunnr had to taste the reality of rejection; though today they have e-commerce, hyperlocal and foodtech businesses among their clients. The initial set of clients was skeptical of the idea. As technical people, the duo wouldn't sell the product or the idea; they were focused on iterating what could be built.

Nobody believed the product could exist. Mohit says that one of the clients asked him whether they were sure that they were actually building such a product. "While everyone was focused on a full stack or a B2C model, we were keen on solving one problem in the B2B space - logistics," adds Mohit.

When we first had the idea in place, we created several different excel sheets to figure out if we could run the business with our limited savings. It was after we started the work did we realise that ‘excel’ plans rarely hold true with actual business plans," adds Mohit.

The duo thought that their personal funds would last them for at least three months. However, when they actually began working on the operations, the money drained out faster than they realised. "We didn't estimate the cost of running a company," says Arpit.

Getting the first delivery guys onboard

The first set of delivery boys who got onboard were hustled around by the duo. They would order in food and ask the boys if they were willing to join. They were trained at Mohit's house. "They were skeptical; so I began paying them weekly," adds Mohit. Then they began testing the platform, ran dummy orders, distributed flyers and did other field work.

The first client to believe in the duo and take them onboard was a restaurant in Koramangala. The first day they had 15 orders, and in a few days that number reduced to five. On talking to the client the duo realised that the phone was dead and hence no orders were coming through. "We were contemplating getting the phone fixed," says Mohit. Once they realised that they could get more clients, they got Arvind onboard, who managed to get more restaurants.

Soon the team, and the clients, started facing the issue of delivering in the rainy season. They also realised that most home delivery orders came in during this time of the year. To ensure that the fulfillment actually happens, the duo themselves got on the road. "Arpit has done close to 50 orders," jests Mohit.

The duo realised that this was important; it taught them the ground realities and made them work towards meeting the expectations from both the clients’ and the merchants’ side. "It taught us humility, and being calm in any situation," says Arpit.

Today Roadrunnr is no longer based out of its shared office space; their bustling office building is located in the heart of Bengaluru. But they still hold true to their core values. The duo believes that in a business like logistics you need to be passionate and aggressive towards solving the problem statement. And at the same time be humble.

"Humility is very important for us; we believe that no problem or idea is small. Everything has a solution and it just needs to be solved," says Arpit. The delivery boys, too, are trained strictly on attitude, etiquette and behaviour.

Roadrunnr today is growing at 20 per cent on a weekly basis. The duo, however, believes there is a long way to go. They intend to build the largest fleet of on-demand hyperlocal deliveries in the country.

By removing the middleman we have opened an opportunity to work as a delivery man or woman. There is huge scope in the logistics space, and there is no need for vehicles like bikes; you can look at electric cycles, foot or any other mode of transport. It's like empowering a large segment of the population," adds Mohit.