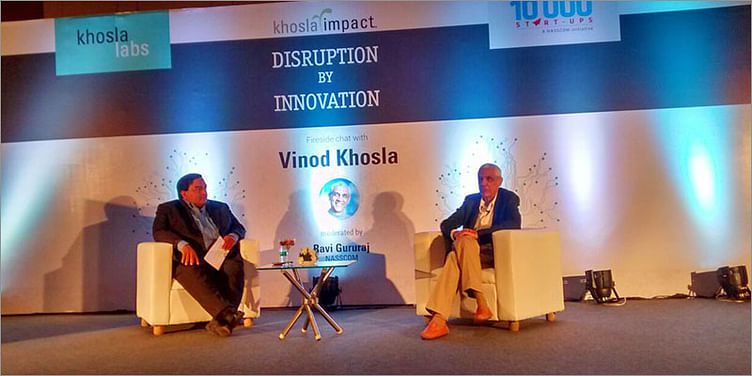 According to Vinod Khosla, 85 per cent of valuations in the startup world are over valued and 10 to 15 per cent are undervalued. The renowned Silicon Valley-based Venture Capitalist and Founder of Khosla Venture was speaking at a Fireside Chat organized by Nasscom 10,000 Startups and moderated by Ravi Gururaj, Chairman, Nasscom Product and Executive Council in Bengaluru on Thursday.

Vinod also said that in 10 years if you add up the market capital of the same companies it will be higher than what it is today. He further added that even Google was perceived to have been over valued at the time of its IPO- but today we understand that is not the case.

Recently, e-commerce firm Flipkart closed a funding round of over USD 550 million at a valuation of USD 16 billion, led by Tiger Global and others. And Snapdeal, with a valuation of nearly USD five billion, raised a USD 500-million investment led by Alibaba, Foxconn, and Softbank. Existing investors Temasek, BlackRock, Myriad, and Premji Invest also participated in this round.

Commenting on the easily available capital in India, he recommended that the startup community should not be too confident while valuing a company. Before burning money, one must examine the flow of the business model.

According to Yourstory Research report, in the first quarter of 2015, Indian startups raised USD 1.7 billion from investors as against USD 450 million during the same period last year. The figures indicates a 300 per cent growth in the amount raised.

Vinod also highlighted the success stories of transportation ventures like Ola and Uber. Today, startups in India wait for a particular business model to be cracked and then they start raising capital by claiming to be the next Uber and Ola.

“I don’t have strong interest in IPO”

Vinod said that in India though some companies went public, he believed that the fundamental value lies in creating products and services that add economic value. The product should provide economic business and address pain points in the society. It is important to understand how a particular startup got funding, whether it is based on the valuation of the company or the fundamental value proposition it provides to the end user.

“India is a chaotic market but it is also a robust one and both aspects should go together.” Vinod added.

In the current digital world, it is important that everyone, be it from rural or urban areas, should have a digital identity. Vinod noted that Aadhaar card can make financial inclusion easier, especially for those in the bottom of the pyramid. Physical money is good when one does not have other means of transacting. However, in urban India, the usage of physical cash went down due to the inclination towards digital wallet. Over the last decade, things changed rapidly in India when people started increasingly applying innovation, Vinod added.

My willingness to fail gives me the ability to succeed

We often internalise others’ expectations. Vinod cited some examples of internalising society stereotypes: “My parents expect me to get good grades, so I think I should get good grades. People expect me to get a promotion at my job. I will, even if I don’t enjoy working there. People should be driven by what they want to do and should continue to do it even it means a pay cut by half. You should do it because it excites you more and you find real happiness in it.”

Vinod said that while he was studying at IIT Delhi, he took computer classes along with four of his batch mates. It wasn’t very long before a professor of biomedical engineering programme also joined them. In 60s and 70s, it was hard to imagine having classes on computer programming.

He added, “Most people have dreams but few act on them. Unless you prepare yourself to take risks, you won’t be fulfilling your dream. I have failed many times. My willingness to fail gave me the ability to succeed. If you are afraid of failure, you cannot attempt to do things and make them happen.”