The 20 habits of eventual millionaires 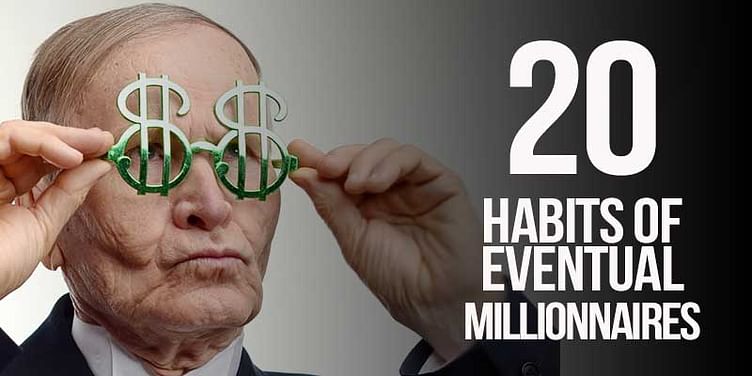 This is the wrong question. It's upside down.

This is a tacky question. This is sort of a rude question.

But this was a question on Quora. Actually, the question was a bit worse. It was "I'm in my 20s - can someone in their 40s tell me what I need to do to become a financial success?"

Maybe don't look for shortcuts. Too many shortcuts is "death by a thousand cuts".

Here's a question: I'm in my 40s, can someone in their 20s tell me how to restore that feeling of lightness, no obligations and the feeling that "Enough" is a Feast?

Here's a question: I'm in my 20s, can someone tell me what success is?

Here's another question: I'm lonely, can someone tell me how a ray of sunlight can remember that by itself it is nothing, but together it's the Sun?

Money is not everything. It's a side effect. It's a byproduct. It's nuclear waste after all the energy has already powered the Earth.

Focus just on the habits. Only the first half of the question.

Everyone needs different habits. If someone has an arm amputated he needs a new arm. Another person might need a new eye.

Another person needs to listen better.

I'm sorry. I was about to answer. But I need to define "habit".

When I was lying in the gutter at 3 in the morning, drunk, and cars swerving around me, I needed first to be pulled to the sidewalk.

I needed to improve 1% a day and that never ends. I needed to remember I had two little girls to be a better person for.

- Every day, be around people who are kind to you and love you.

This is a difficult habit. So don't sweat it. Just improve a little bit each day.

A bonsai tree grows every day. But the bonsai master knows where to prune to create a work of art over years.

Which means: avoid things you know are bad for you. Be a little healthier each day. You can't get rich from a hospital bed. Or a grave.

People think metabolism changes as we get older. This is not really true. What changes is we sit more. So move more.

This is a practice. When angry, or stressed, find one thing to be grateful for. Where is the practice? Is this really so hard.

The hard part is noticing that you are angry and stressed. It's the difference between being scared in a movie and saying, "wait, it's just a movie".

- Write down ten ideas a day.

I've written this a million times. Watch the movie "Limitless". Bradley Cooper takes a pill that turns him into a superman of brain power. Writing down 10 ideas a day is that pill. Try it for six months and you will see.

Many people have ONE GOAL in life. And they aim their lives for that one goal. Good luck with that.

The real key is to plant many seeds. 1% of the seeds planted will turn into 50% of the flowers.

What are some seeds?

Send a thank you letter. Send an intro letter. Send ideas to people. Exercise. Eat well. Surprise your spouse. Make a website. Come up with an idea. Write an article. Read a book. Think of 100 more seeds.

Every day plant some seeds.

But even that excuse, which two seconds ago I thought was a truism, is false.

One day Virgin Galactic and SpaceX will send tourists into space for cheap. So one day I'll be an astronaut.

I have enough time again. No excuses.

Make a list of the 25 things you want to do in life. Now do the top 5. And NEVER THINK ABOUT THE OTHER 20 EVERY AGAIN.

Else they will take time away from the 5 that are most important to you.

I'm really bad a this. Which is why I have to build a habit instead of "do this!"

The other day I had dinner with a bunch of interesting people. I have a perfect idea how to follow up with them.

But I havn't done it yet. I don't know why. It's hard for me to follow up.

So it's a practice. But I'll do it. I want to get better at this habit.

Following up might be a "nice to meet you" email. Or maybe it's buying them a first edition of their favorite book. Or maybe it's one of the 10,000 things in between that.

- Stand next to the smartest person in the room.

Harold Ramis did it (Bill Murray). Steve Jobs did it (Steve Wozniak). Craig Silverstein did it. (who? Larry Page.) Kanye West did it (Jay-Z).

I've done it repeatedly. (Yoda). I have a motto: "I am the dumbest person in the room". Then it helps me to find the smartest person in each room.

The smartest person in the room is going to do something. Watch what they do. Something special. Just follow them without asking questions.

- Do one thing every day you loved as a kid.

I loved to write. So I write every day. I loved being nice to girls. So I'm nice to women every day.

Other people loved sports. I didn't.

Brian Grazer, the world famous movie produce or Apollo 13, Arrested Development, and about 100 other movies, would have "curiousity conversations".

He's simply call up anyone he wanted (the Dalai Lama, Steve Jobs, etc) , explain who he was, and asked them questions.

That's how he met Ron Howard (the smartest person in his room). That's how they together started Imagine Entertainment. That's how he's now got the top show on TV ("Empire").

I was teaching my daughter to serve harder. She had a good consistent serve. She never missed. But it was too soft. Easy to return.

She started missing. She was getting depressed. Every shot came in about 6 inches to the left of the box.

But then she adjusted. The shots started to hit in the box. And they were harder.

I asked her, "what was going on in your head?"

She said, "I saw I was hitting too much to the left so I moved it over."

If she kept hitting her safe easy shot, she never would have improved.

Only mistakes made her improve. ONLY MISTAKES.

Everyone has a different opinion on this. I sleep nine hours a night. Then I try to take a nap during the day.

Your brain is most active 2-5 hours after you wake up. Do your productive passion work then.

Stay away from people who claim they only need 3-5 hours a sleep a night. They are evil.

I used to travel a lot for meetings. None of them made money. Not a single one.

In between, I had meetings that went nowhere. Then I went back to my company.

- A little every day

I want to write a novel.

That's ok. That means in five years you will be a success. Because of "a little every day".

I've interviewed about 150 successful people so far for my podcast. I don't mean "financial success". Again, money is a byproduct.

One thing in common: 10 - 20 years for an overnight success.

Along the way to overnight success (20 years) you will have many many small successes.

You can only give yourself permission for the next one if you celebrate the small success. It gives reinforcement to all of these habits.

Plus, it's fun. You know what I mean.

I don't have to teach you what love is. But here's what I try to do:

a. if it's someone I don't know, I pretend like they are going to die tomorrow. So I treat them with the love we treat someone who will not exist anymore.

b. if it's someone I don't like, I treat them the way a mother treats her child. I wish for their best, no matter what my personal feelings are.

c. if it's someone I love but is not making me happy, I sincerely wish them the best for the future.

Often we pray to things that don't exist. Often we meditate with invisible goals in mind. Often we believe in science fiction.

But right this second you can feel love, and that's the only religion.

Every time I've had a problem in the future, it never came true.

Every time I've had a regret in the past, the regret kept me glued to the mud.

Right now you are dealt cards. No other hand before or after will help you right now.

So this is the only moment to focus on. Right now is best predictor of Right Life.

I said I had 20 habits. I can't count that high. So I don't know if this is true. I give myself permission to not be exact all the time.

Then you will gradually have whatever you gave yourself permission "to not".

Will these habits make you a millionaire? Yes. Definitely.

Will these habits make you a success? Yes.

These habits will make you the sort of person who has these habits.

No longer will you be a single ray of light. You will be the sun.

Recommended Post: Step by Step Guide to Make $10 Million and Then Totally Blow It

$70 million was a lot of money for me at the time. And I couldn’t sleep at night until I gave back every dollar to the people who gave it to me