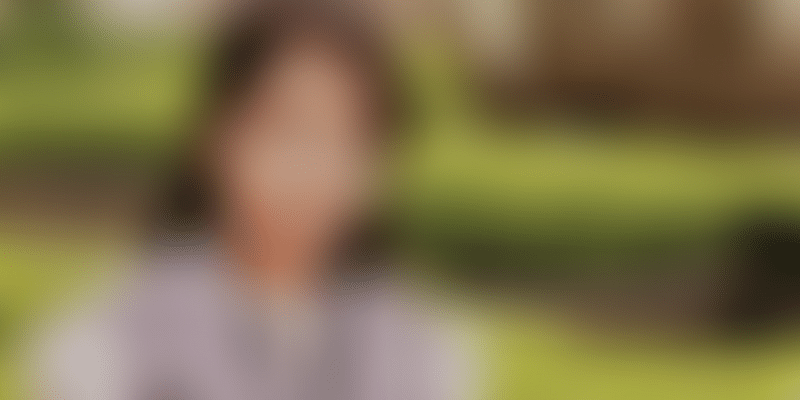 Jyoti Arora is a resident of Ghaziabad. She suffers from thalassemia major. Thalassemia is a blood disorder characterized by abnormal formation of haemoglobin. This results in improper oxygen transport and destruction of red blood cells. This means that she has to undergo blood transfusions every three weeks. In a developing country like India, most thalassemia patients do not live to see an adult life. Due to irregularities in blood transfusion and iron accumulation in internal organs, they suffer from slow physical and mental growth.

Jyoti’s story, however, is different. Although she had to leave school after the seventh standard, she continued self-educating herself and did an MA in English Literature and Applied Psychology. She authored two novels, is a techie, a teacher, a thalassemia crusader, and an inspiration for many. Jyoti is not here to give up, and has a long list of plans for her future.

Jyoti has to undergo blood transfusions every three weeks, which compensates for her bone marrow’s inability to produce blood. This, however, leads to excess iron accumulation in her body. To get rid of this excess iron which is toxic, she has to spend 4-5 nights every week taking injections all night long. Since she has crossed the eligibility age for Bone Marrow Transplant, which is the permanent cure for Thalassemia, she will have to continue her blood transfusions and iron reductions her entire life.Jyoti was detected with Thalassemia when she was three months old. Her father recalls how shocked they were when they came to know about her condition. He was working in NTPC and Jyoti’s mother was a housewife. Without succumbing to any social or financial pressure, they wanted to raise their daughter in a normal way.

Jyoti’s parents provided her with all the medical support and did everything to provide her with a fulfilling and happy childhood. They sent her to school, although due to her medical condition and frequent visits to the hospital, her schooling was disrupted often. She had to drop out after finishing her seventh standard.

Without being discouraged by her medical condition, Jyoti pursued her education through distance learning. She completed her school through correspondence and did an MA in English and Applied Psychology. She also completed a Creative Writing course from UK. Soon afterwards, Jyoti started teaching English to children and did freelance writing for magazines. Jyoti recalls,“I did a lot of writing and content development while teaching English to children. During those days, I spent my time writing books, and rewriting non-fiction books on Bollywood and spirituality for children. I also abridged over 30 classics and made them suitable for pre-teens to read.”Jyoti soon started working for a US-based recruitment company. Although her tryst with thalassemia took away most of her time and energy, she dreamt of writing her own novel someday and devoted her free time working on it. In the year 2011, Jyoti published her first novel, Dream’s Sake. The novel was centered on the problems faced by people who suffer from disabilities, the insecurities they face, and the emotions they handle in their day-to-day lives.

Soon afterwards, she was shaken to the core by the Nirbhaya gang rape incident. This inspired her to start writing her second novel. Jyoti recalls,“I wanted to participate in the protests, but my health didn’t permit. In utter helplessness, I decided to start writing my second novel, Lemon Girl, which was centered on the life of a rape victim. The protagonist of the novel loses her identity after being a victim of the horrible crime. Although a male friend tries to help her recover from her deep sorrow, she still finds it difficult to forget what she had gone through. She eventually recovers. My understanding of psychology helped me a lot create realistic characters for the novel. Both my novels have been received well by readers and critics alike.”Although Jyoti’s first love remains writing, she has a keen eye for technology too. She runs a technology blog where she reviews mobile phones, gadgets, apps and websites regularly. In the year 2011, she won the Samsung Mobiler of the Year award. Out of the 20 shortlisted bloggers, she was the only participant with no scientific or technical education. She was also the only woman to be shortlisted. In the year 2014, Jyoti was also chosen the best employee of the recruitment firm she works for. She was also honoured by Shiela Dixit, the former CM of Delhi, for her exemplary work.

Recalling Jyoti’s phenomenal journey, her father Omprakash Arora gets emotional as he tells us, “Our daughter has crossed the age when we could have gone for her Bone Marrow Transplant, which is the cure for Thalassemia. Doctors had rejected the idea calling it complicated and dangerous in her case. It is only her strong undefeated will-power that has kept her going.” He further adds,“It is really painful for us to watch her take blood transfusions every third week. It hurts even more when she spends over 50 hours a week taking injections against the iron accumulation in her body. We are proud of the way she has fought back. The way she has proven herself with her writing, blogging and meaningful career makes us realize how brave and special our daughter is.”Jyoti has also won the Thalassemia Achievers Trophy in the year 2012. She was invited as a speaker at the World Thalassemia Day programme celebrated on the 8th of May every year. Coincidently, she also celebrates her birthday on the same day. Jyoti took this opportunity to spread awareness about her condition and debunk some myths surrounding it.

Thalassemia can be prevented by early detection. Since it is a genetic disorder, antenatal screening can be done to detect traits early on. If both parents carry Thalassemia traits, there is one out of four chance that their child will be a Thalassemia major. Even today, Jyoti spends a good amount of her time spreading awareness about Thalassemia and how it can be prevented.

Raped by her uncle and nearly sold by her mother, Pinky Sheikh soldiers on

From a farm labourer to an IT millionairess, how Jyothi Reddy beat all odds to emerge a winner

From collecting 3000 shoes in a month to running with the Olympic torch, Simran Vedvyas wants to change the world