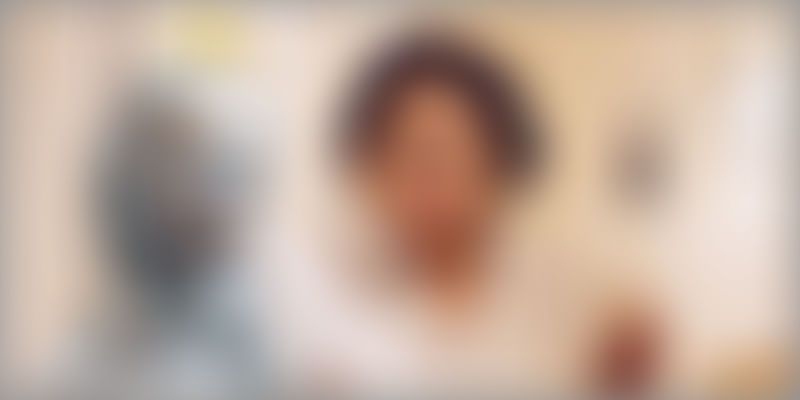 Imbibing positivity is humanity’s way of moving through obstacles and carving a niche. Artist Kiran Dixit Thacker turned her traumatic childhood, made worse by a stepmother, an abusive husband, and loss of her only daughter, into a temple of creativity.

Kiran Dixit Thacker, 68 years old, a sculptor trained under the illustrious Ramkinkar Baij, started working on her craft only in the year 2000. Kiran’s work captures the essence of nature, people, relationships, and moods through her canvas of life-sized bronze sculptures like portraits, a typical Bengali adda, cats stretching, Santhal families on bicycles, a bus ferrying passengers for a marriage, young boys playing in water. Her work gives joy to the viewer but her own story wasn’t always so.

“My childhood was not very pleasant. My mother had walked out of home with my father’s friend. And it was traumatic for me and my father. It was a stigma that I had to bear through my childhood. When I was in school, I used to tell people my mother had died. A lot of my childhood and teens was spent lying. To make things worse, my father remarried and my step mother wasn’t a nice woman. Cinderalla’s and my story are alike. The only good thing that my stepmother did was to send me to Rajghat Besant School in Benaras. Imagine, at the age of 12, I was sitting with Jiddu Krishnamurti and having deep interactions with him. He gave me a lot of confidence. He started my thinking process. He taught me to question everything,” narrates Kiran without a pause.

After her schooling, Kiran enrolled herself at Vishwa Bharati University, Shantiniketan, for BA Hons in Philosophy and a diploma in fine arts, which she passed with distinction. This is where she was learning all about logical positivism and at the same time in a parallel universe she was also getting trained under

Ramkinkar Baij. “Kinkar da would give me poetry to read and made me participate in his plays (I was the heroine in his last play). Suddenly I was everywhere, I entered student politics, became a student leader, and went on to become the general secretary for Kalabhavan and I was deeply involved in sports too,” she tells. “It was around then that I was asked by Dhiren Deb Burman (my teacher, a painter, companion of Tagore on his foreign travels) if I had no heart or inclination towards art. That was a turning point. When I answered that, I never wanted to do anything else but art. He advised me to stop all extracurricular activities and devote all my time practising art. And my life turned around,” Kiran adds.Of wrong choices

And as we all learn from wrong choices, Kiran too did, albeit with little scope for correction. How she went on to make the most of a new, emended vision, is a compelling story. “Since I had no place in my father’s or mother’s home, I married a guy who stayed in London and was 20 years elder to me without even meeting him once. This marriage was pure escapism. My world came crumbling down when I realised I was in a bad marriage with physical and verbal violence to deal with. It breaks the ego, when one gets slapped. I felt even lonelier, as I had no

friends or relatives, but I decided to move on and seek legal help in spite of what people would advise me from India – about social stigma, future, etc. In that respect, I feel I have had guardian angels throughout my life. When I finished my B.Ed in London, I failed to get a job as an art teacher. But my inspector offered me a job as a craft design technology for the middle school, as there was no women teacher around. I had a daughter to look after as well. I did evening classes in London where I taught all kinds of things from art, batik, Indian cooking, embellishments, which would get me good money to fund my daughter’s education and more importantly a school trip she wanted to be a part of, among other things,” reveals Kiran.And as if this hard life wasn’t enough, there was more to come. Kiran says, “After my daughter’s death, I was going round in circles from clairvoyants, to psychics to Upanishads in search of my answers, as to why me? I wanted to know why this happens to people? And my guardian angel was sent again. I found myself reunited with Krishnamurti by a book written on his talks in Geneva and one of the chapters spoke about handling grief. That book gave me the strength to accept grief when I was heartbroken. For, I could have killed myself after my daughter died. I heard him asking me, I understand your loss is great but ‘are you crying for yourself or for the person you lost, sought/sort this out before.”

Reuntied with art at Shantiniketan

“Fear has to come and stand in front of you, in case you want to be innovative and discover something new. Leave your comfort zones, get up and start on a path less taken,” Kiran advises. And she did exactly that. “I had little bit of money, I could have lived comfortably. I had a job but that wasn’t enough. My dream was to come back to Shantiniketan. My dream was to paint and sculpt and that required me to pack my bags, resign from my job at the age of 52. I thought if I were to die tomorrow with unfulfilled dreams then it would be a life wasted. So I flew to Shantiniketan, where I knew no one,” she says.

There are very few people who have been taught by Kinkar da. And Kiran has the distinction of being the only living woman sculptor to have trained under Ramkinkar Baij. Like her whole story, this came after a lot of effort and hardships too. “When I came back to India in 2000, I was full of self-doubt. I wondered whether my hands will be able to produce anything. It took me a long time to even draw a line. Then finally, one day, I requested for a corner at Shantiniketan and took some clay and for 15 days I just made maquettes. I was told by curious observers and art people that they could see Kinkar da’s chaap/style in my work,” she explains about her moments of self-doubt. “That was a moment of happiness for me. A friend and I were the one who used to put clay for him and it is natural that my work would eventually be influenced by my mentor. On hearing such comments I would smile mischievously, and thank Kinkar da.”

Kiran is an eternal optimist as she claims in her own words. “Even in the depth of my despair I can get up and laugh and play.” And that reflects in her work too. “My philosophy for work has been derived from

what my gurus taught. We had immense respect for them. If I was told this piece has been wrongly done, I would begin from scratch again without questioning as I knew they know something which I don’t know. But if I thought that I had a point, I would go and ask how it should have been done. Kinkar da would reply ‘go draw, get the skeleton out, a thing should stand on its own.’ And in that simple sounding line, we got a deep answer that helped us shape our work today,” she tells.It has been 15 years hence and having had shown at London and India, her heart only longs for Shantiniketan. “There is something about India. I am an Indian at heart and in love with the Bengali language. In my dream Shantiniketan is such a beautiful place. It has quais, lotus, birds, unlike the present Shantiniketan of walls, cars honking and music. I have my dream and I am happy in that. I work and you see there is no violence in there. That’s it. That’s life and that gets reflected in my work,” she admits, boisterously.

Her only regret is not starting sooner. She hopes her hands won’t give away for another 10 years for she wants to next carve in stone. “Stone is very majestic and to give it form is something that I want to do. I have worked a lot on wood and metal but stone is something else.

For the work that I am doing and want to do, one lifetime is not enough, I need at least two.” And that sums up her work and life so pertinently.