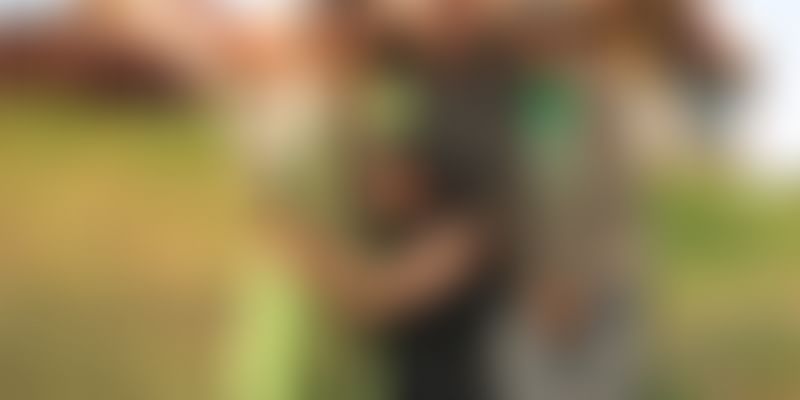 As clouds rise up from the gentle Nilgiri hills in Tamil Nadu, in the small town of Coonoor an unlikely resident goes about his work. He has been here before to make films, this time around he’s here to live off the land. Bollywood director Mansoor Khan who shot to fame with his super hit film ‘Qayamat Se Qayamat Tak’, in which he launched his super star cousin Aamir Khan, decided to leave the star spangled life of tinsel town to don the muddy boots of a farmer. Well almost. Mansoor bought 7 acres with the only money he had left from his life as a Bollywood director, put all his life savings into buying a piece of land he could call his own. He bought seven cows and two goats. Some may find his life idyllic, others may call him a maverick, but Mansoor Khan is doing what he always wanted to do- own a piece of land and live off it.

He’s incredibly honest about his journey so far. He arrived in Coonoor because he was depressed he says, having lost both his parents, feeling anchorless with just a hunch that for now he was done making films. Within a year he was able to convince his wife and kids to leave their life in Mumbai and that’s how they landed in the quiet hill station of Coonoor. They stumbled upon cheese making but before he knew it he and his wife Tina were giving lessons in how to make artisanal cheese as a part of their ‘explore life on a farm’ experience. His homestay has only seven rooms. That’s characteristically Mansoor, he likes to keep things low key, he says it’s enough to keep him going and allows him to do what he loves doing these days.

Mansoor has just finished writing his own book The Third Curve. He has spent the last 2 years travelling to every nook and corner of the country, he addresses school children, college kids, IT professionals, housewives, and even buttonholes guests at his homestay to talk about his book. Mansoor has a message and he wants to make sure it reaches everyone- and that is, we cannot go on living on this planet with infinite needs and finite resources.He’s clear environmentalism for him isn’t a moral choice, he’s not here to lecture people, and he just wants to drive home a simple point. And for this his book has graphs and charts and cartoons that make it easy to understand what he’s saying. Of course his days at MIT and Cornell come in handy and when you read through his book you realize you are in the company of a brilliant mind.

I have visited his farm, learnt how to make cheese and felt intrigued by how this man from Tinsel Town followed his dream. I am sure it wasn’t easy to make that transition. In this freewheeling chat Mansoor with his trademark honesty talks about how he got Aamir Khan to think about big dams, his days of depression and how he wants to make films again. Here’s to the man who gave us QSQT, left Bollywood behind to live a quiet life and reinvent himself as an entrepreneur and writer.

WHY HE GAVE UP FILMS FOR CHEESE?

“I would not say it was a very sudden decision. It was a deep-rooted desire from my childhood days , we had land near Panvel and I just felt deeply connected , when my sister and I would go and plant bhindi with our bare hands. I went abroad to Cornell and then to MIT but just wasn’t happy. My father that time suggested why don’t you try your hand in filming? My prime objective even then was to live off the land, films were just a stop gap arrangement till I could live the life I wanted to. I was there in Cornell and MIT from 1979 to 1980 and then chose to opt out in my last year at MIT. I was very fond of sailing and had land at that time near Alibaug. The government then wanted to acquire land for an airport and that’s when I became familiar with this whole debate of land acquisition and land rights.”

OF BOLLYWOOD HITS AND THE YEARNING FOR SOMETHING NON-URBAN

“While I was making films, I used to come to Coonoor for shoots and my nephew Imran (Khan) was studying here in Boarding school. That’s when I decided this place gave me peace, this is where I wanted to be. That’s why in the year 2003-4 I started coming here for longer spells. We already had a family house in Coonoor but I started spending more time here. When I moved here I was already in debt, I was also quite depressed having lost both my parents recently .I was just following my heart. It was easy leaving Bollywood as films were just a stop gap arrangement , till I could escape. In the beginning when I moved here my friends thought I was becoming too cloistered that I was a maverick.”

‘MY THIS IS IT’ movement

“That moment when my wife Tina and our kids decided to move to Coonoor with me was my ‘THIS IS IT’ moment. It felt real. The fact that my family was going to join me here made it real. Then we started reading up on cheese making on the internet , it was important for me that Tina had something to do, which she liked and before we knew it the cheese was a hit. And then I became bolder, I loved the idea that when guests came we could teach them how to make cheese and soon it worked well economically as well for us. I don’t advertise my homestay, I deliberately keep everything understated, I like to live life at a QUALITATIVE rather than a QUANTITATIVE level.”

MY BOOK – THE THIRD CURVE

“Well life has come full circle in many ways. I was reading up on energy issues, I had in my days at University in the US, as a physicist been familiar with all these issues, when suddenly I thought we need to talk about this more. I wasn’t thinking of writing a book but I was invited to different places to give lectures and that’s when someone suggested why you don’t put all this in a book. I spoke to Aamir (Khan) he put me in touch with Chikki Sarkar in Penguin, I spoke to many people then I thought I have something to say so why don’t I publish the book myself. See if I wrote a book about Bollywood I would have got a fat pay cheque here I was writing about an issue in which I wanted to have all the freedom, to write as I wanted to say it. And so I wrote the book. It has done well, we printed 5000 copies, of which I think I have sold 3000 myself just by travelling around talking to people from all walks of life. It’s a book which everyone should read from corporates to ordinary people it appeals to everyone. I was in fact surprised by how many people relate to it. I didn’t want to talk about environment as a moral issue, that scares people off it makes them guilty. My message in my book is simple- How do you lead a life of LIMITLESS GROWTH on a planet with FINITE resources?”AND WHAT DOES AAMIR KHAN THINK OF HIS LIFE AND BOOK

“Well Aamir has always been aware of my ‘off-centre’ thoughts; he was the one who asked me well how will you get this message out to people? Few people know this; you know that phase when Aamir got involved with the Narmada movement. I was the one who got him into this whole debate of large dams. Though I feel bad about it now because he got a lot of flak for it later!”

WHY I WANT TO GO BACK TO FILM MAKING

“I do feel the urgency now to take what I wrote in this book forward maybe as a feature film. But this isn’t the kind of film I would want should be part of the 100 crore club. I need to work on the script I need to drub the language and graphs – approach it in an entirely different way. That’s the challenge. I talk in an intuitive way, I need to write this film first and that’s what I am working on these days.”

(For more information on how to purchase copies of the Third Curve you can visit his website http://mansoorkhan.net/)