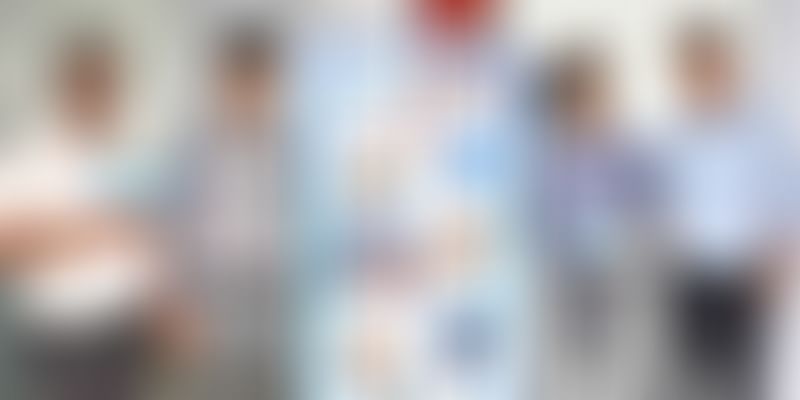 Founded in June 2015 with a seed capital of Rs 10 lakh, Urban Dhobi is a Jaipur-based online aggregator for laundromats and is currently catering to six areas in the city. In just three months, the startup has acquired 2,000 users, of which more than 700 are customers. In August 2015, the startup was incubated by Startup Oasis, a Jaipur-based incubation centre set up at the joint initiative of RIICO, Rajasthan’s premiere industrial promotion organisation, and the Centre for Innovation, Incubation and Entrepreneurship at IIM-Ahmedabad.

Urban Dhobi is the brainchild of four friends -- Satyam Mishra, Prakhar Pagaria, Tushar Thettayil and Saransh Sidhu -- who decided to leave their jobs in June 2015 to work on a prototype. Before starting Urban Dhobi, Prakhar, Satyam and Tushar were working for an international consulting firm based in Ahmedabad and Saransh was working for analytics startup Binary Labs in Delhi.

Satyam, being the CEO of the company, looks after the new strategies in the company and is also a helping hand in the marketing and go-market strategy in the other target cities. Prakhar is the COO and looks after the day-to-day operations and ensures follow up of strategy. Saransh handles the technical team of Android, IOS and backend developers and website designers. Tushar is the CMO and works on expansion plans in different cities.

Satyam says, “More than 70 per cent of the customers are giving us repeat orders with an average of four orders a month. Our delivery boy takes the lot to our partner laundromats. Washing and drying is done in the laundromat. Eighty per cent of clothes which are taken out of the dryer are wrinkle-free and don’t require ironing. However, as per the demand of the customer, we iron out the clothes in our laundromat and deliver them in just 24 hours. We have a express service in which we deliver clothes in just four hours as well.”

Urban Dhobi works on Android app, iPhone app and a delivery app which enable users to track their laundry. The startup takes a minimum lot of three kg.

Once the order is placed, a representative visits the customer’s place at a preferred time slot, collects the clothes and weighs them with a handheld digital weighing machine. These clothes will then be sent to the laundry to be washed in hi-tech machines. The washed clothes are then delivered at customers’ doorstep and one can pay for the service by cash or by card.

Getting the first customer

Initially, the founders went to different restaurants, IT companies and cafes to advertise their products. On June 30, Urban Dhobi got its first order. The startup charges Rs 150 for three kg of clothes and Rs 200 for five kg of clothes, and Rs. 35 per kg for anything above that. The average ticket size is Rs 300 of which 65 per cent is paid to the laundromat. Currently, it has seven delivery boys.

“We don’t have any washer man as our business model is to outsource laundry to laundromats,” Satyam says, adding that regular quality checks are conducted at the laundromat by the team. “Our process is automated and because of no manual involvement chances of poor quality are one in a million,” he adds.

As a part of its CSR activities, Urban Dhobi has initiated ‘Donate with Urban Dhobi’ where one can donate clothes to various NGOs via Urban Dhobi. Currently, the startup has tied up with two NGOs in Udaipur and Delhi.

In the last couple of years, the on-demand laundry services market in India has picked up. Startups in this space seem to be tapping the growth potential of the Rs 2,00,000-crore laundry market, 95 per cent of which is unorganised. MyWash, Wassup, Pick My Laundry, Speed Clean, Quickclean, Dhobionline, Laundrywala and DirkDaDhobi some of the startups that are building a niche market with online laundry services.

Some of them have managed to attract capital from the investors. Recently, Chennai-based online laundry service startup Wassup raised USD two million in funds from Jabong founders.

Urban Dhobi will soon launch a monthly plan for customers that will allow users to recharge wallet with Rs 900 and gain 1,000 points that can be used for five washes in a month. The startup also helps small entrepreneurs set up laundromat in areas or cities where they are not available. So far, the startup has witnessed a growth of 20 per cent month on month. It plans to receive 200 orders a day in the next one year and in terms of geographical expansion, will expand its services in Ahmedabad, Kota , Chandigarh, Indore, Pune and Hyderabad in the next six months.