Conducting a business versus being an entrepreneur 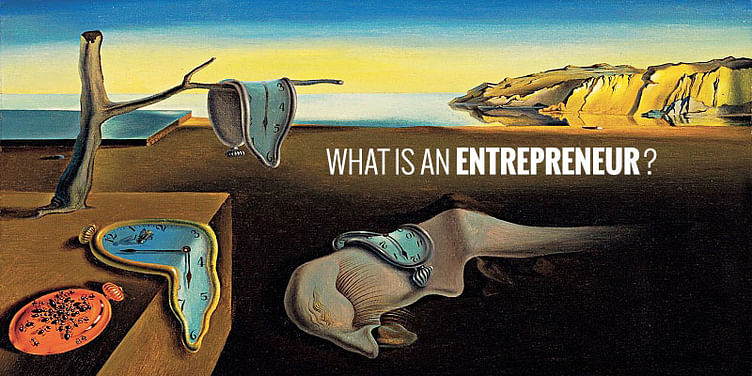 - Jean-Paul Sartre (Being and Nothingness)

This self-reflection becomes a part of his being, his identity which exists in self. The manifestation of this identity, however, comes later in his action and how he defines the world. It is the identity and the realization that establishes that he is an entrepreneur first and the essence comes later though his actions. Or as Sartre, Heidegger and other existentialist philosophers of the 20th century would say, existence comes before essence.

A creator is not necessarily an existentialist. But if you consider an entrepreneur who is building, say, mobile-apps, we find that the creator in this case has an early conception of what he makes. He has a pre-existent formula, or a design to work with. Thus the mobile-app is at the same time an article producible in a certain manner and one which, on the other hand, serves a definite purpose.

While an avant-garde artist or a surreal painter might not have an answer to this question, an entrepreneur will always know what purpose his mobile-app is meant to serve. The app's essence - that is, its definition, design and logic - precedes its existence. Or as a non-idealist materialist would say, production precedes existence here.

The same theory would apply on nature or God as the creator too. This is in accordance with the idea of pre-existential philosophers including Descartes and Leibnitz too, who believed that the will follows, more or less, from the understanding. When God creates he knows precisely what he is creating, similar to the entrepreneur who builds mobile-apps.

Even in the tradition of philosophic atheism of the eighteenth century, the notion of God is suppressed, but not the idea that essence is prior to existence. Be it the ideas of Voltaire, Locke, or Kant, in every case man possesses a conception of the enlightened human being, the universal 'human nature'. In Kierkegaard's preoccupation with choice and Nietzsche's challenge to universal bases for moral evaluation too, the essence of man precedes the historic existence which one confronts in experience.

Existentialists argue that a man is different from a rock because he is free. A rock is the idea of being in itself. In contrast, man is never an essence, no matter how much he strives at self-essentialism. The way he interprets his past and foresees his future is itself a series of choices. It is only after his death that his essence is defined.

In fact, Sartre takes a step further and conquers the idea of death in his famous play ‘No Exit’, where three people die and are sent to hell. To their surprise, there is no torturer, no punishment. Confined in a plain furnished room, the only constraints are on leaving the room and looking into a mirror. These dead souls can't 'reflect', and slowly start becoming transparent in their own consciousness. Constantly being judged by each other, Sartre goes on to claim that “hell is other people.”

Man is the future of man

The philosophy of existentialism was clearly an aftermath of growing alienation in the industrial era. To dismiss this growing contempt, Sartre came up with another radical thought – Humanism, which, according to him is a “general term used to refer to any theory which puts human beings at the center of things: so for instance, the humanism of the Renaissance was characterized by a movement away from metaphysical speculation about the nature of God to a concern with the works of humanity, especially in art and literature.”When seen in the modern economic context, entrepreneurs do question the established order of doing business. It is this absolute character of free commitment, in which an entrepreneur often realizes himself. A concrete problem to solve becomes the core of the entrepreneur’s business plan. Many of these innovative ideas go on to benefit mankind by making life easier for the masses. As the Book of Life rightly says, “the entrepreneur, like the artist, has to pick up on faint tremors in the human soul, and clearly define their nature and causes.”

Since it values complete freedom, emphasizes human potential, and makes individuals responsible for the outcomes of their own lives, existentialism has often been considered an optimistic philosophy. It is not difficult to discover how infectious the optimism of entrepreneurs is. This optimism is not however, self-congratulatory, which Sartre rejects as absurd, carousing. Entrepreneurs reject self-congratulations and are always looking forward. The achievements are but an event to be observed and to move further.

An entrepreneur courageously gambles on himself when he enters an uncharted business territory and becomes responsible entirely for what he does. He takes the future of humanity in his own hands when he comes out with a taxi app and changes the way millions of people hire cabs. Even though money or materialism play a role here, if this is not optimism, then what is?

The philosophy of existentialism can be used in asking many similar questions which play a major role in decision making for the entrepreneur - what is the personal responsibility of the entrepreneur in his business? What is the choice of life in the workplace he creates? How much freedom and responsibility do his employees enjoy? How can we avoid bad-faith in decision making? And most importantly, what is his level of authenticity?

The long standing debate on opportunity being a positivist versus a social constructionist entity can be seen in this light. While positivists believe that opportunities exist in the world ready to be discovered, social constructionist claim that opportunities are results of the entrepreneur’s creativity. Michael Goldsby and Robert Mathews in their essay ‘Entrepreneurship and Existentialism’ take an existentialist stand on the debate. Their structuration theory claims that opportunities “do not exist a priori waiting to be discovered, but become manifested to the entrepreneur and to others as they are conceptualized and developed by the actor as part of the venturing process.”

For an entrepreneur, being authentic would be to engage with the world and being true to the understanding of the dilemmas which constitute his true self, and then engage authentically with the existential choices being faced by him. Self-deception, or bad faith should constantly be under the radar. Pine and Gilmore took the idea a step further in 'The Experience Economy' when they argued that "every business is a stage and work is a theatre."The question of authenticity constantly reverberates in the debate for leadership too, posing the possibility of tension between leaders' authenticity and that of followers. Existentialism, should hence play a validator’s role in defining ethics in the coming times. This process has already started. Laura Nash in her book, 'Ethics without the Sermon' asked twelve famous existential questions in the process of decision making in business -

Decision makers in big companies have strict guidelines and policies to follow. The challenge for the entrepreneurs, however, is completely different when it comes to decision making. It is these decisions they make, that shape their company and its values in the times to come. The self-awareness that existentialism embodies in an entrepreneur can help here.

In one’s subconscious, existentialism is often a doctrine of action, and that of optimism. A close look at the lives of celebrated entrepreneurs like Evan Williams, Steve Jobs, Elon Musk, and Peter Diamandis helps validate this. A quick comparison with agile and lean startup philosophies also helps establish the connection on how decision making is essentially a question of authenticity, which in turn, is a manifestation of existence preceding essence.

It is in this context, that business and entrepreneurship are different. While conducting a business is an economic activity, being an entrepreneur is something more fundamental. Sartre was probably right when he said, “man is a useless passion.”

What kills you and me makes us stronger

How to change the world from a chai shop