Women in Technology: Diversity and Inclusion at Work 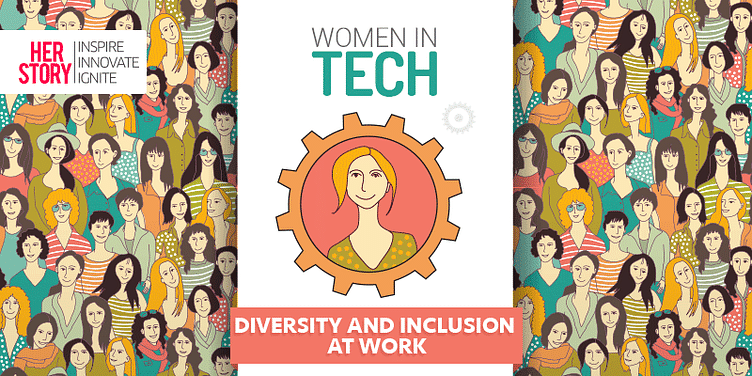 The words ‘Diversity’ and ‘Inclusion’ (D&I) are making the rounds in Silicon Valley these days, especially after several tech giants released their diversity data last year. A lot of companies, small and big, have instituted positions like Chief Diversity Officer, Diversity Recruiter, D&I Consultant, and so on. It’s encouraging to see companies accept that they need diversity of thought, and therefore cultural diversity, to drive innovation and business. Companies are allocating funds towards diversity initiatives and publishing reports detailing their methodology to improve diversity. While this article focuses on the inclusion of more women in the tech industry, most of these arguments apply to other under-represented groups like racial and ethnic minorities, people with disabilities, etc.

Coming to the question of the hour: Why do we need a systematic D&I effort? Now that companies are more or less aware of the business case for diversity, why not let the system drive itself? Well, the answer is simple: it will not happen on its own, not in today’s workforce and business environment. The inertia is too high, and here’s why:

Studies have shown that people tend to refer and hire employees who are like themselves, and gender, race, etc., often factor into that decision. As the majority of tech staff tends to be men, they go on to refer and hire other men.

A significant chunk of tech companies’ hires is by employee referral. This strategy makes sense because employees are very likely to refer someone they think will fit the work ethic and drive of the company. However, due to the inherently low number of women in the company, referrals by them for other women will be much lower than the majority referrals and will get lost in this system.

Bias, unconscious or otherwise, demonstrated by hiring managers, interviewers, and recruiters weed out the resumes that have women’s names. A concentrated D&I effort will help call attention to these events and ensure hiring of qualified applicants of diverse backgrounds.

In order to execute this well, D&I efforts have to do two things: make a diligent effort to look for qualified candidates with the required skill sets and experiences with diverse backgrounds, and make sure these under-represented candidates are seriously considered for the role without being weeded out due to bias. This concentrated effort is required for various reasons. First, there are fewer women studying STEM in the first place, and are therefore more difficult to find than male candidates. Second, studies show that often women candidates with the same qualifications are considered less competent than their male counterparts, or if they’re considered competent they’re deemed unlikeable. These inherent biases result in women’s resumes being disregarded despite them being qualified candidates. Third, even when women are hired, they’re usually offered lesser compensation than men with the same qualifications. Companies are already implementing various strategies around these aspects.

Some companies and countries are experimenting with quotas that teams have to fill. As a woman in tech, and having spoken to several other women on this issue, I don’t like the idea of a quota system to improve diversity statistics. Yes, the ‘numbers’ might get better, but this will be an artificial surge with serious backlash for a number of reasons:

-No minority should have to live with the stigma of being there just to fill a quota. Minorities already feel isolated and marginalised in companies and being a token minority will only make that worse – their opinion will be discounted even more, and they will always have the feeling that they don’t deserve to be there.

-A quota system might compromise the quality of talent and result in a less qualified candidate picked over a more qualified one. However, it’s dangerous to assume that it will happen every time just because a minority candidate is being given the job, but it definitely could happen.

-If a quota is insisted upon, then the whole thing becomes a numbers game, and the true spirit of diversity and inclusion will be lost.

Companies should have dedicated D&I personnel looking for minority candidates on LinkedIn, at college career fairs, etc. They should also put special effort in ensuring that resumes of minority candidates aren’t being disregarded for trivial reasons. Reasons like ‘she sounds aggressive’,’‘she’s in the age where she might have a baby and leave the company,’ or ‘he sounds more competent’ shouldn’t be accepted anymore. Instead, all decisions (hiring, rejection, promotions, etc.) must be examined closely to ensure fair play. Crucially, they should ensure that women aren’t being paid lesser than men for the same qualifications. For example, Xerox has had a diversity program for around 40 years where managers are expected, as part of their annual performance evaluation, to explain what they did to ensure diversity. Salesforce is another great example where the CEO recently announced that he intends to equalise pay between women and men and remove the gender pay gap in two years. Pinterest has commissioned an outside firm to analyse their compensation packages and check for gender pay gaps. Specific objectives like these help define diversity goals and hold people accountable for their actions.

The topic of diversity in the technical workforce isn’t new; people have been talking about it for a few decades now. Previously, it was mostly lip service and very few companies actually made D&I a priority. In fact, many large tech companies resisted reporting their workforce demographics for years to preserve their competitive advantage. What’s exciting now is that many companies are voluntarily divulging their diversity statistics and pay gap, publishing reports detailing how they intend to improve the inequity, channelling money into diversity initiatives and fixing the leaky pipeline for women in STEM. This gives us – employees, shareholders, consumers, and other stakeholders – concrete ways to measure their progress and embrace change that’s been long due.