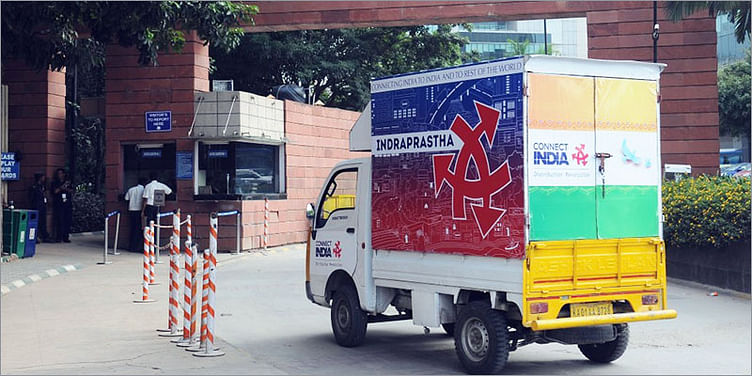 He has also played a key role in building networks for companies such as SKYPAK, Overnight Express, and Corporate Couriers – a JV between TNT Express Worldwide and AFL. In 2006, he was appointed Group Managing Director of Sical Distriparks Limited and was on the Board of Sical Group’s subsidiary companies. When Café Coffee Day acquired Sical Logistics in 2011, Sridhar decided it was time to start his own consulting and recruiting company that focused on the logistics and supply chain industry. The timing could not have been more perfect.

Barely a year later, in 2013, it was boom time for the eCommerce industry in India and last mile delivery (LMD) emerged a strong business proposition. It was this sudden growth that inspired Sridhar to launch Connect India to fill the gap in the LMD space.

Today, Connect India is a common distribution LMD platform for e-commerce sites and corporate houses. It connects remote villages with a population as low as 5,000 to the rest of the country, and even the world through international partnerships.

When the Modi government was talking about connecting India, I thought the timing was perfect to start something. I decided to set up a last mile distribution platform where I could not only work for the rural population, but also improve their livelihood.

Reaching out through India

The company aims to someday connect all 675 districts and 25,000 pin codes in the country, creating a delivery network of local entrepreneurs, thereby improving their livelihoods. It has appointed entrepreneurs who can do LMD covering 200 to 300 locations. Connect India has also tied up with common service centres (CSCs) to act as LMD units. They have already partnered with 600 CSCs, and are looking to grow this number to 10,000 by the end of the current financial year.

Sridhar says, "The idea is to create a logistics pipeline between rural and urban India.” Explaining how Connect India’s delivery model works in rural areas, Sridhar says, We operate our vans in rural areas from one central location. We allocate one Connect India Centre (CIC) to one pin code. So, in every pin code, I have one CIC centre delivering 30-40 shipments."

In the metros, the centres operate in a radius of one to two km, following the neighbourhood model delivering goods from medical, local kirana, departmental and mobile stores. In the last four months, the company has opened 2,000 CICs. The entrepreneurs who run those CICs get a share of our revenue, which could range from 30-50%.

In India, today there are 58 million small and household enterprises doing business. Connect India will play a crucial role in helping these sellers reach the national and international markets through its CICs via eCommerce platforms.

It’s not just the sellers who stand to gain. On the delivery of products, delivery personnel earn a 35-40% margin. This is what sets the Connect India model apart. Usually, in metro cities, the LMD staff end up in debt as surviving in Tier I cities is an expensive affair. Many also have to support their families. The Connect India model allows them to earn the same urban income in the comfort of their own village.

In a bid to upskill their staff and increase computer literacy, Connect India has hired trainers for their rural India centres. They have also established 500 sq ft skill centres in each district they operate in.

Connect India aims to create a skilled logistic work force and will work continually to develop and impart different training and development programmes in the related business of distribution and other allied activities.

Connect India aims to create a disruptive model in the logistics industry by building a business model high on variability, both in terms of cost and ability to handle volumes. The company will leverage existing under-utilised economic assets, such as kirana stores, pharmacies, department stores, and boutiques to develop a last-mile entrepreneurial-based distribution network.

The company will aggregate multiple services for its CICs under the Single Terminal with Multiple Services (STEMS) model to ensure sustainable distribution by providing services such as Cash on Delivery and Aided Commerce, Domestic and International Courier Services, Banking and e-Governance Services, Secured Documents Delivery, Micro Warehousing and Drop Box Centres. The technology will also provide end-to-end visibility on delivery status through a mobile application.

In August 2015, Connect India received an investment of Rs 32 crore from Aavishkaar to launch its commercial operations in 17 states, 150 towns and build 1,500 CICs in both rural and urban markets.

We are looking for a second round of investment in January or February, when we will probably move to automation. I hope to create micro warehousing across the country.

Currently, Connect India has 200 employees, but hopes to increase this number by 1,000 by the end of the year. Geographically, it will expand to 350 locations covering almost 15,000 pin codes.

"Connect India will offer a platform that provides the convenience of neighbourhood distribution in metro cities and Tier 1 and 2 cities, while offering a reliable and time-definite micro-logistic pipe for rural India to participate in global commerce. By 2016-2017, we will be a Rs 260-300 crore company. In five years, we are expecting to be a billion dollar company," says Sridhar.