Why take a leap when you can moonshot? 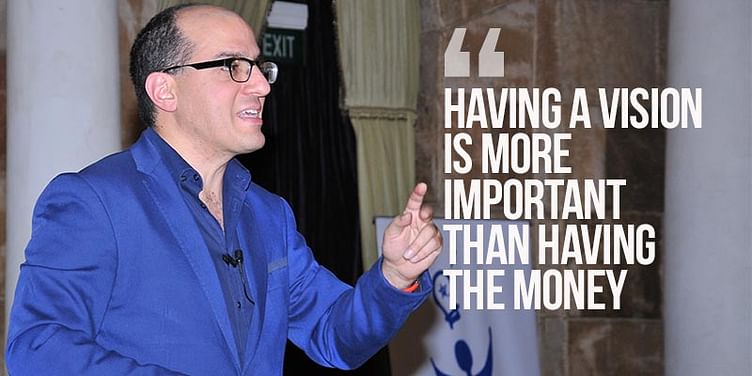 Google X is cool but only when you make these things work in Mumbai and Bengaluru, one can be confident about nearing the goal.

The above statement stands as a perfect testimony to Jack Hidary’s moonshot approach. Senior advisor at Google X, Co-founder of Automotive XPRIZE and Chairman of Samba Energy, are some of the many roles through which Jack is encouraging the 'moonshot thinking' across the globe.

The term 'moonshot' is a common reference to Google X projects within the company. Moonshot growth has a great deal of relevance to Indian startups, given the non-linear growth curve they adapt.

Jack was in India for a few days and spent some time meeting and advising startups in Bengaluru. YourStory got a chance to interact with him at an event hosted by Kalaari Capital where he shared his philosophy and thoughts for India, which is on its way to become a moonshot nation.

Jack was probably among the first million users to access email. In his first interaction with Internet, Jack felt that Internet access is a make-or-break to decide the future. He was also a big fan of neuroscience and how 80-100 billion neurons function to make us what we are. Our brain runs on a mere 20 watt power and to manufacture any such device with technology in our hand, we have to moonshot.

Why Tesla survived and Fisker couldn’t

We all know that Tesla is not the first company to manufacture electric vehicles, but it surely is the first to bring it closer to consumers by making it as good and powerful, if not better,as petrol-run vehicles. However, there was another company which came close to doing the same. California-based Karma Automotive’s first and only product, Fisker Karma, was one of the world's first production plug-in hybrid electric vehicles. It made its debut in2008, creating the premium green car segment in which most major manufacturers have since announced they would compete. Production was suspended in November 2012 due to financial difficulties, with about 2,450 Karmas built since 2011.

Between Tesla and Fisker, Tesla took the moonshot and brought the people out of the comfort of having petrol option as well. There was a leap in innovation and not in installments. That’s what paid off well for Tesla.

According to Jack, startups battle for key resources all the time which decide if they will moonshot or reach a downfall. Some of these key resources are:

Uber’s moonshot is not technology, it’s the audacity to believe that you can take 250 markets and take care of all the complications of operations there.

How to build a moonshot startup

It took the Internet almost four decades to reach three billion people. But it’s going to take much less for the next three billion people to access Internet (only five to seven years). India will itself witness a major chunk of this growth. Over the last few years, India has shown that it’s a non-linear society which is reflected in our startups to an extent as well. Startups have to think of moonshot as a tool in their toolbox. If you want to know that your startup is a moonshot startup, you can see if it ticks off the following checklist:

Before you think of business plan, you need to be clear about your vision. Bill Gates had a vision to place a computer in each household, Ford was keen to replace horses with cars and making them affordable.

It becomes easy once you have a vision. Though, one has to take care of differentiating between a product and a company. Jack believes that big vision will eventually attract good talent.

Jack stated that a CEO should have honest conversation with the investors when he/she is going for moonshot. It is important to share the aspirations and vision of the company with investors and team. This reduces tension which may appear due to lack of communication and also makes the company an attractive destination for venture capitalists. One of the early investors in Tesla Motors Steve Jurvetson had an aspiration of investing in a world-changing idea which he found in Tesla.

Too many startups are not solving the hard problems and hence they commoditise.

Moonshot – a legacy for all

Mahatma Gandhi is a great example of a #moonshotter #India #INK2015 pic.twitter.com/hGPgegtTJg

Moonshot need not be a legacy of startups. Daimler AG group has demonstrated that with its subsidiary Car2Go. The company offers exclusively Smart For two vehicles and features one-way, point-to-point rentals. Users are charged by the minute with hourly and daily rates available. The service forgoes the typical centralised rental office, and cars are user-accessed wherever parked via mobile app. As of May 2015, Car2Go is the largest car sharing company in the world with over 10,00,000 members.

Do you agree with Jack that India is a moonshot nation or there's still time for that?