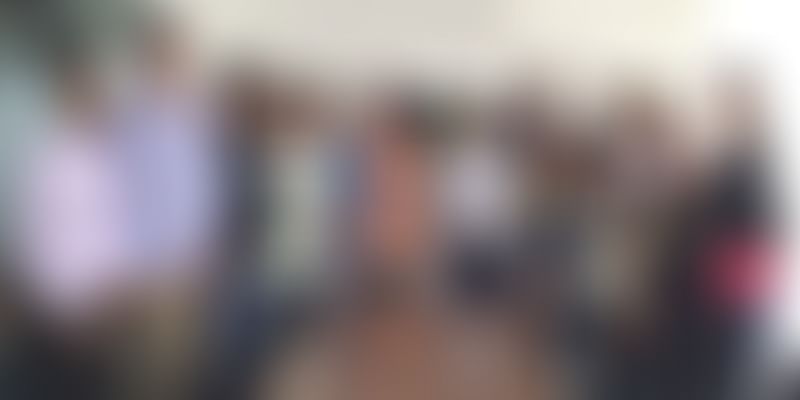 Merchant payments in India is still considered a cash-driven space. However, one can start reverse counting to see the world going cashless and cardless with the next generation of mobile payments. What if you discover that you forgot to carry your wallet after reaching a retail store? The Ultracash app aims to help users in such a situation to shop seamlessly.

Founded by Umesh Singhal and Vishal Lal in September 2014 in Bengaluru, Ultracashhas created a mobile payment ecosystem, where customers can pay merchants at physical stores using their mobile phone directly from their bank account or credit/debit card without the need of transferring the money to any digital wallet. Ultracash has been incubated by Ubona Technologies. Currently, it has a team of 25 people.

The underlying essence of Ultracash is the patent-pending technology, where payment data is securely transferred from one device to the other using ultra high frequency sound waves. This innovative technology ensures that Ultracash’s 'Tap and Pay' works on all devices and doesn’t need any special hardware to make the payment and there is no need of special NFC chips.

In less than four months, Ultracash clocked more than 35,000 app downloads, with 50,000 transactions exceeding an amount of Rs 2.5 crores. Vishal points out that in terms of transaction value, they have been growing at 150-200per cent month on month.

The startup has tied up with more than 500 merchants in various domains ranging from restaurants/cafes to groceries to stationery and electronics to online groceries.

"One of the biggest differentiators of UltraCash is that Internet is not required at the time of payment and the customer can pay using any of his payment instruments - including Bank Accounts and Cards," says Vishal.

Ultracash’s technology is claimed to be fast, paired, encrypted; copy protected, time sensitive, inaudible and payment grade. Its technology transfers 256 bytes of payment data in fraction of a second. The current retail merchant system is dependent on passive POS (Point-Of-Sale) machine for digital payment which has a slower speed of scalability.

The current POS system is dependent on banks and is a slower process of scaling up. India has more than 20 million merchants and countless home businesses, but only around one million POS machines are registered. With Ultracash, any merchant with a smartphone can join the wave of digital payment revolution.

Before conceptualising Ultracash, the duo spent around one-and-half years to understand the complex and disparate payment options, ecosystems and regulators in India.

Vishal says, “The initial days was all about breaking down complex layers of payment space and applying technology to arrive at secure, fast, reliable and innovative solutions to a complex problem.”

Ensuring the security of customer data

Ultracash also helps merchants reduce costs on Merchant Discount Rate (the cut that the merchant needs to pay every time the card is swiped). By building based on the indigenously built NPCI’s IMPS, it ensures the cost of transactions for the merchants is minimal.

To become an Ultracash accredited partner, the merchant needs to fill the authentication KYC form, download the Ultracash App and attach his/her bank account. It will further allow the merchant to have as many phones attached to the app and increase points of billing in peak hours without any extra hardware investment.

For acquiring connections both for cards and IMPS, UltraCash has tied up with ICICI, HDFC and Yes Bank for acquiring connections. “Ultracash works on a topology like the Credit Card Network where the merchant will have an account with an acquiring bank, and consumers having card or bank account from any issuing bank will be able to pay,” says Vishal.

Backed by the increased penetration of smartphone and 3G and 4G services across more geographies, the digital payment industry in India is set script a new growth chapter. According to study by Zinnov, the mobile commerce market may grow by 55 per cent from its present size of $2 billion to $19 billion by 2019.

The survey also revealed that 91 per cent of the consumers have leveraged phone to search a product or service.

Anish Williams, Co-founder and CEO at TranServ, says, “The country is surely moving towards a cashless economy: IMPS transactions have overtaken money order, debit and credit cards in just four years, both in terms of volume and value. Moreover, Digital India and financial inclusion have driven mobile wallet adoption in the rural and semi-urban areas by extending financial services to the unbanked population.”