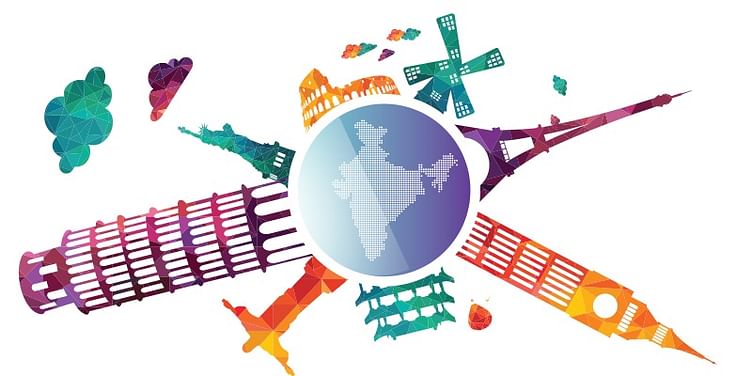 India is ‘a nation brimming with ideas,’ according to a CNBC report. India’s startup industry is the ‘youngest and fastest-growing in the world.’ For example, Oyo, India's largest network of budget hotels was created in less than two years.

The Australian Broadcasting Corporation (ABC) featured the increasing role of Indian entrepreneurs in shaping the country’s future. The report cited the work of Hindol Sengupta, author of ‘Recasting India’ (see my book review).

India West analysed how US startup business models may be applied in India: via localisation, extension to adjacent segments, long-tail extensions, and e-enablement of traditional industry.

The rise of mobile ad network InMobi which is ‘giving Facebook and Google a run for their money’ drew international attention (Forbes). US-headquartered e-commerce giant Amazon’s battle with Indian rivals Flipkart, Snapdeal and Paytm was also covered by a range of international press including the Wall Street Journal. India’s e-commerce market is expected to hit $11 billion by year-end 2015, according to Goldman Sachs.

“We will invest whatever it takes to win,” according to Amazon India head Amit Agarwal. “Public-market investors will want to know the path to profitability,” cautioned Rahul Chowdhri, a partner in Helion Venture.

Indian Prime Minister Narendra Modi’s visit to Silicon Valley led to lots of speculation and recommendations on how the visit could benefit the US and India. The government was urged to create a more business-friendly environment in India and ease IPO rules.

NRI media such as the ‘India West’ newspaper in the US covered not just the big Indian startup stories but also developments around Indian and Indian American entrepreneurs in the US and Canada. Reshma Saujani, the Indian American founder and CEO of Girls Who Code, received an Infosys Foundation USA grant (India West).

Indian American entrepreneur Vivek Ramaswamy, who turned $5 million into $3 billion with Axovant Sciences’ IPO, was featured as the cover story in Forbes’ Sept. 28 issue. The Arista Networks team of Jayshree Ullal and Andy Bechtolsheim was honored by Ernst and Young as the 2015 Entrepreneur of the Year (India West).

The India-China startup connection was explored in international media via examples such as Paytm (Financial Times). “If you want to learn what is happening in mobile internet in the world, you don’t go West, you go East,” according to Paytm founder Vijay Shekhar Sharma.

The investments of Didi Kuaidi, Uber's main rival in China, into Ola, were covered by CNN Money. The deal is intended to stem Uber's rise in Asia; Didi has also formed a partnership with US-based Lyft and invested in Southeast Asia’s GrabTaxi. Both Didi and Lyft are backed by Alibaba and Tencent. India is one of the few markets where Uber has faced a stiff local rival; Uber is ramping up to meet the challenges and now operates in more cities in India than in the US.

Silicon Valley is generally regarded as the most successful startup hub in the world, with many countries and cities trying to replicate the model. Forbes covered India’s startup ecosystem, noting that Indian startups attracted $1.44 billion of venture capital funding in the first nine months of 2015, more than in the whole of 2014.

Bangalore is regarded as the ‘city of choice for the Indian entrepreneur’ and not just for the large IT firms (BBC).

The BBC covered Indian startups such as Zivame and Boutline; the news report also cited investment data from YourStory. “India is still a decade behind becoming a matured manufacturing hub,” according to Arjun Narayan, founder of Catamaran.

Forbes featured an interview with Ronnie Screwvala, author of ‘Dream with Your Eyes Open: An Entrepreneurial Journey’ (see my book review).

Recode covered the new business models emerging in India around WhatsApp, the growing profile of investors such as Tiger Global, the lack of brand loyalty in e-commerce, the proliferation of outdoor ads for startups, and the ever-growing whisper of the b-word – ‘bubble!’

Silicon India covered several highlights of India’s startup journey in 2015, such as the two biggest acquisitions (Snapdeal and FreeCharge; Ola and TaxiForSure), and the first ever investments in India by Chinese e-commerce giant Alibaba's Chairman Jack Ma (in Paytm), followed by Tencent’s investment in Practo.

[email protected] featured an extended piece on the roots of India’s entrepreneurial problems, the British legacy of an extractive economy, extensive presence of corruption and bribery, and the need to have economic freedom as a fundamental right.

The rise of new engagement models such as accelerators featured in Forbes; for example, Cambridge Technology Enterprises has launched Cambridge Innovations to accelerate big data startups.

As for entrepreneur networks, Forbes has profiled the Under 25 Club, a network for those aged 25 and below, whose annual summit has grown into five categories: food, music, technology, design and young achievers (Forbes also published the ‘Under 30’ list).

The raising of larger India funds by Nexus and Sequoia was covered for Forbes by Rebeca Fannin, author of ‘Startup Asia’ (see my book review). Nexus Venture Partners has raised a new fund of $450 million, and Sequoia Capital India is reportedly raising a fifth fund (last year’s fund was $530 million).

Investors profiled in international media include Aashish Bhinde of investment bank Avendus; the investor has beaten others in the game such as Deutsche Bank AG and Credit Suisse Group AG, and has advised on 20 Internet deals totaling $1.1 billion in the past four years, including Saavn and TaxiForSure.

Predictions that India’s sizzling startup boom may soon cool were made in the Los Angeles Times, drawing on speculation about over-valued e-commerce players and the range of layoffs by other startups in sectors like food-tech. Still, the outlook has promise, thanks to market indicators such as 580 million mobile Internet users by 2018. The article also profiled Indian startups such as Paytm, RailYatri and MyCity4Kids.com, and acquisitions of Indian startups by the likes of Facebook, Twitter, Yahoo and Ibibo.

The Chennai floods and the role of startups in providing disaster relief were covered by Forbes. These included free mobile top-ups by Paytm, hospital listings by Practo, volunteer coordination by LookUp, boats by Ola, and free pest-control by UrbanClap. Such natural disasters can be viewed as an opportunity for startups to ‘project themselves as socially conscious.’

There was also coverage of foreign entrepreneurs and new players operating in India. For example, Nigerian education admissions startup 1Plify joined the French accelerator programme NUMA in Bangalore (Disrupt Africa). Bla Bla Car from Europe is scaling up in India (Voice of America).

Physiotherapist Mona Kalra from India was recognised at the Ottawa Immigrant Entrepreneur Awards, along with Anand Aggarwal of Manor Park Development and Abdul Haseeb Awan of Bitaccess (Metro News). In other awards, Indo-Canadian Harry Gandhi, founder and CEO of Medella Health, was named a Thiel Fellow (India West).

As 2015 draws to a close, an epic battle over Net Neutrality is being fought with Facebook’s Free Basics pitted against Indian Internet activists, covered by local as well as international media (Fortune). Critics argue that Free Basics may provide access to some online content and services, but is not a level playing field for future startups. Some even condemn it as another example of ‘White man’s burden,’ and others raise their eyebrows at the exorbitant money Facebook is spending on full-page newspaper ads and outdoor hoardings.

Nonetheless, many international media have rightly picked on recommendations and needs for India’s startup ecosystem. These include the need for Indian campuses to encourage the 'startup spirit' in students, negotiating the war for talent, dealing with job cuts at e-commerce startups, the need for startups to learn from one another’s experiences, prospects for the bio-tech sector, the need for more women entrepreneurs, and the pressure on government to reform listing rules (Flipkart and inMobi are registered as Singapore companies).

In sum, India's startups are regarded as the ‘investment of the moment,’ thanks to the digital boom and more startup acquisitions (Forbes). “For now, bubble or no bubble, the party is still on,” says investment expert Raj Mitra (e27).