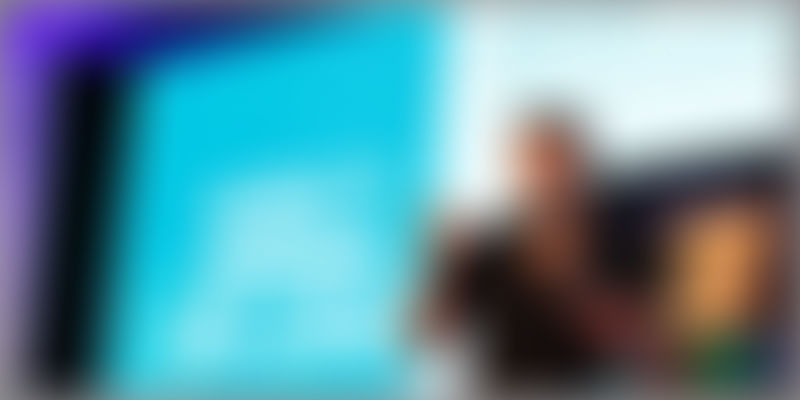 How does one create India’s biggest and arguably the most well-known ed-tech company? If you ask Byju Raveendran of Byju’s Classes, he’ll tell you it’s by competing with yourself, and not others. His passion and drive are infectious. At TechSparks 2015, Byju’s talk had focused around making students love learning, get addicted to learning. This may sound a bit over-the-top coming from anyone else, but Byju has proved it by creating something extraordinary by addressing the root of the problem – making learning both engaging and personalized.

YourStory caught up with Byju at the company’s headquarters at Koramangala in Bangalore, a high-energy place, buzzing with not just activity but also a high level of excitement among both staff and students. Byju’s started off small, as an offline test prep provider for CAT, GRE, GMAT, JEE & Med, and the Civil Services exams. It thenexpanded into coaching for Classes 11 and 12, and further to Classes 6-10. He’s often be described as a maths genius, but he’s a shrewd entrepreneur too. His company has raised over $40 million in funds from the likes of T.V. Mohandas Pai and Dr Ranjan Pai of the Manipal Group & Sequoia Capital. Many of his former students now work with him, as teachers and course developers.

Byju has spent countless hours teaching maths for entrance exams, and his zeal to transform the nature of learning, working on innovation 24x7, has brought Byju’s so far ahead of being just another test prep provider.To cut a long story short, Byju’s growth catalyst, along with his ambition, was going mobile.

“We have been a very successful offline brand, but last year we launched our first application through a mobile platform, and that has helped us leapfrog to the next level in terms of users,” he says, and reiterates his mantra of personalized learning: “We are making an impact where it matters, and how students learn in those crucial years where they start failing (in a) subject, in the 6th or 7th grades. We know we are making a much bigger impact because we are changing the way India is learning today.”

They currently reach over 20 lakh students, all of whom are free users, and are adding nearly 20,000 students every month. But here’s what makes them successful – Byju’s is clocking 20 per cent month-on-month growth in terms of converting around 20 per cent of those into serious, paid users. When you know how high-energy, passionate and driven Byju is, the numbers suddenly seem very realistic. It all stems from his growing-up years, when he always went beyond the curriculum and guide books. He attributes the success to the time spent outside the classroom.

“That’s why I advise all students that there are a lot of things that you need to learn from books, but there is a lot more that you can learn outside the classrooms by playing multiple games…whatever passion you see, the energy which you see, the positive aggression you see is mostly because the amount of time I have spent outside my classrooms – that helped me in multiple ways,” he explains. “One is to learn the real-lifeskills, which is helping me to make bigger and bigger impact…and that kind of forced me to learn on my own. So from the beginning…I used to learn below and above the curriculum. The subjects I used to like I used to learn, and the subjects I kind of never used to like, I used to still follow what most of the students are following today which is about memorizing, replicating and then forgetting.”

Most of the ed-tech companies across the globe, those who actually create contentdo it in two ways.One is to simply capture what I am saying now...The second one is just using 2D animation, 3D animation and characters to teach. Now what we have done is, we’ve mixed real teachers with animation, making it a seamless experience. It took us so much time and so much effort to bring out the energy through the videos.

He’s so focused on talking about the content they create and how they deliver it that it’s almost tough to get him to talk about himself – after all, he is the brand; it’s literally and figuratively his name on the door. So what’s been his key success?

“If you ask me where I have been successful, it’s in recreating a lot more Byjus or better than the original Byju.That’s because I have been able to sell my vision of making an impact in terms of how the students are learning and why that is important. Coming from my kind of background, I know that education is what I am today and education is the only way to make it big or the best way to make it big, depending on which section (of society) you belong to,” he replies honestly and to the point.

So how does he keep going through the challenges – setting up and running a business and constantly innovating? “It’s very simple. In one sentence if you ask me:increase your aspirational level as much as possible, because none of us ever made our aspirational level. And keep on losing to yourself, try beating yourself every day, compete with yourself day in and day out. (Your) competition is not with others, (it) is with yourself.Especially when you are creating something which people have not done before, the competition has to be with yourself,” he explains as clearly as the concepts in the videos his company puts out.

Never one to take things slow, Byju has firmly set his sights on the international stage, to become the biggest such company in the world. “The idea is to reach there in the next four years is what I tell investors and everyone else, but we will reach there much faster, because my target internally is much more aggressive,” he says with all the energy of an enthusiastic entrepreneur who knows exactly what he’s set out to do. And when it’s Byju saying it, disruption suddenly doesn’t seem like a tall order.