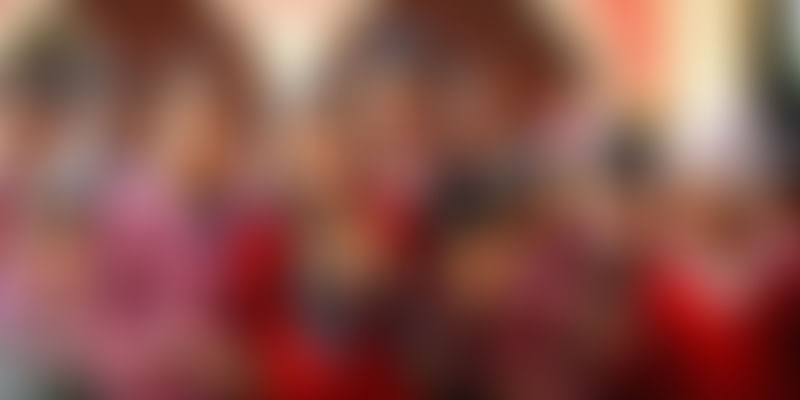 This could be the last year of 14-year-old Shaheen’s childhood. Chances are her parents will pull her out of school next year and get her married. In the Solah Patti area in Haryana, where she comes from, that is what most families do.

When I spot her, she is giggling and skipping rope with her classmates, living in the moment, like only kids can. Her dark eyes sparkle and reflect the blue of the dupatta she wraps snugly around her face. It’s a habit with her; she knows her head should not remain uncovered. For Deepalaya School in Gusbethi village, Shaheen is a success story. She succeeded in completing her primary education. There are girls in her village who have never seen a classroom.

For Deepalaya volunteers, success finds many definitions, most of which do not match your perspective and mine. Yet if you think over it deeper this is what inclusion is all about. To do what you can, to whatever extent you can, while coexisting with a community whose beliefs you might not agree with. Even though Shaheen might never have a career or a say in her own life, we can still hope that when she has a daughter she will understand her need to get an education better than her own parents did who never went to school.

And maybe that is how change will come about in the India that we don’t normally like to talk about.

“The villagers don’t want to send their girls to school, they believe education will turn their heads,” acting headmaster Inderjit Kumar tells me. Though Inderjit has joined only recently, Deepalaya has been working with runaway children and those from economically weaker sections of society for a long time. The school Shaheen goes to was opened 15 years ago. It caters to Solah Patti, the Muslim-dominated five-village cluster of Kirori, Gusbethi, Pipaka, Patuka, and Bhutlaka.

To reach here, I drive up the undulating hills of Manesar in Haryana. Once the chaotic, honking, fume-spewing Gurgaon traffic is left behind; there are fields of green mustard, and fresh air. And a small school building made of red bricks where children are rote learning the table of three. The floors are dusty and marked by prints of small feet, some with shoes, some noticeably without.

Sitting cross-legged in the corridor, with the winter sun warming their backs, two rows of children chant tables, their heads bobbing up and down. “Three one jaa three, three two jaa six, three three jaa nine…” their singsong voices carry in the crisp winter air. What makes Taahil catch my eye is that he is head and shoulders above his classmates and has facial hair, something you don’t expect to see on a class II kid. At 15, he is seven years too old for his class. But he is a success story too.

His father, a poor farmer, agreed to send him to school. Most children in Solah Patti spend their childhood helping their fathers till the land, water the plantation, and harvest the crop, depending on what time of the year it is. If they are female, they help in the kitchen, fetch water, carry siblings around on their hip, and often get married around 14 years of age. “Attendance drops in these seasons and we have to understand that the children are busy helping in the field,” Inderjit says.

“People are poor. They are mostly farmers, drivers, or labourers. The majority is illiterate and has many children. With large families and just one earning member, kids are seen as a helping hand. Most families don’t want to send them to school,” he tells me. Introducing children to education is a big challenge, particularly because their parents have never attended school. Most cannot read or write. Volunteers go from door to door trying to convince them. “We have to be very practical. We tell them that even if they want their son to become a driver he will have to pass class eight; to become a factory worker he will need a tenth pass degree. We coax them to let children study, even if only till class 10,” says Inderjit.

Getting the girls to school is even more difficult. The general belief is that education will make them bold and insolent and they might even run away with a boy of their choice. Girls are expected to be obedient daughters and wives. Education is seen as a hindrance to that because it empowers.

The villagers also have a problem with coed classes. They are not comfortable with their girls using a bus or sitting in the same classroom as boys. To convince parents, it was decided that children would address older girls as “didi” (elder sister) and older boys as “bhaiya” (brother). Out of the three school buses, one is being used only to ferry girls. Monthly school fee has been kept a very nominal Rs 75 (about one dollar) for girls and Rs 225 for boys.

“When I joined Deepalaya I never imagined that my duties would include going to villages and pleading with parents to send their kids to school,” says Inderjit, adding with a wry smile, “That’s not really a head master’s job but I do it because I believe that education can change mindsets.” He says he comes from a small village in Bihar. “When I was a child I would hear my grandfather say that a particular tribe could melt your bones if they touched you. He believed it and so did I. It was only when I started going to school that I learnt that he was completely wrong.”

He says it is immensely satisfying to find that the villagers have started attending parent-teacher meets. Last month, 81 came to the school. Though it is a small number considering that 1103 children attend classes, and most of them were only complaining about having to pay school fees, it is a good start.

The boy-girl ratio in the school is 60:40. Even though the school manages to generate only Rs 12 lakh annually, their expenditure touches Rs 70 lakhs. “Donations help us to keep going,” says Inderjit.

Attached to the school is a hostel for runaway children and orphans. Hostel warden John Ramesan and his wife stay with the children, eat with them, and even celebrate birthdays with them. “We try to send the children for higher education if they are good at studies and try to place them in jobs according to their caliber,” he says.

It is only when I am transcribing interviews that I notice the names. A Christian hostel warden and a Hindu school headmaster work with children from a cluster of Muslim-dominated villages. It’s interesting that no one talks about religion there. I notice their faiths only when I write the interviews, too engrossed in their stories to notice these inconsequential details.

To be honest, how does it matter, and who cares, which faith they follow. If there is God I’m sure she is happy to see that they are following the faith of humanity, which is the only one that does make a difference to this world that we live in. In these turbulent times when we are head-banging so much about intolerance, this is a beautiful tale of acceptance and inclusion. I hope you will have the time to read and think about it too.

(Established in 1979, Deepalaya is an ISO 9001-2008 certified NGO that works with urban and rural poor. They have projects running across Delhi, Haryana, Uttarakhand, and UP. Till date they have educated more than 2,70,000 poor children. If you would like to donate, sponsor a child, volunteer or work with Deepalaya you can contact sponsorachild@deepalaya.org, resource@deepalaya.org)

(Names of children have been changed to protect their identity.)