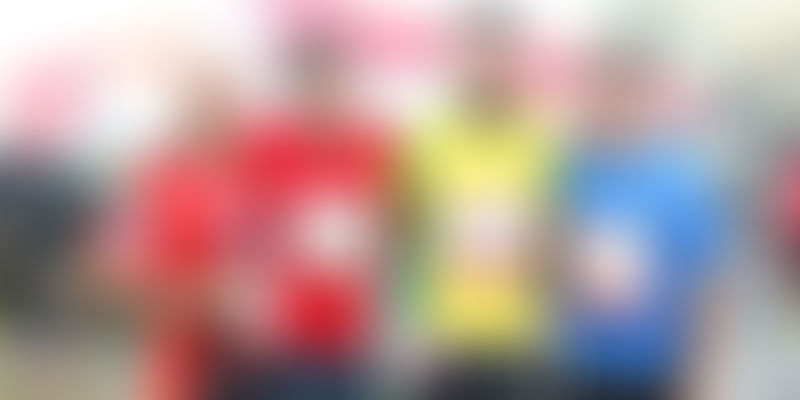 Situated in the heart of Gurgaon and surrounded by brick houses, one will find children playing gully cricket or even with rubber tires. In the midst of all this, there is small business capital with glass houses on one side of the road and a few chai shops on the other. This seems like a perfect place for engineers to gather for a smoke after a hard day’s work.

Most buildings look empty on Sunday except for Grofers, where Sunday is apparently one of the busiest days of the week as orders build up. Initially, servers would often crash on Sundays as the orders piled up. The situation is not the same anymore. Now the servers are ready to take the load. Varun Khurana is responsible to ensure that these servers are good to go and can take up the pressure.

Around 2,000 years ago, Chanakya was walking through a jungle and he stepped on a thorn. He bent down and took it out. The next thing he did was to pour sugared milk all over the place. When a passerby asked him why he did it, he said, "This way I am trying to solve the problem once and for all."

When his wife asked him to get groceries on a Sunday interrupting his peace time, he too decided to end this problem for the entire country. In 2014, he started MyGreenBox, an online grocery delivery service.

Things were going well for MyGreenBox. The grocery space also started heating up in the second half of 2014, with more companies coming up and getting funded. Varun met Albinder (Co-founder and CEO, Grofers) and they decided to merge. MyGreenBox was acquired by Grofers in April 2015 and Varun joined as the CTO.

Varun was born in Dhaka. He had pursued his education in different countries as his father was in the Indian Foreign Service and his work required him to travel around the world. Growing up in countries like Afghanistan, Oman, and Austria had its own advantages as he got an exposure to different education systems around the world. However, there was a minor downside to it as well. And it wasn't revealed until he came back to India. In Vienna, where Varun studied from sixth to the ninth standard, there were no exams and life was good. When he came back to India and had to take exams in the ninth standard, Varun failed in Hindi.

After the 10th standard, Varun set his sights on JEE and cleared it in the first shot. However, his performance wasn't that great. Meanwhile JEE was rescheduled as the news of a paper leak was out. This came as good news to Varun as he could improve upon his performance. Varun secured 18th rank in JEE and got a seat in computer science at IIT Delhi.

IIT was a mecca for like-minded people and Varun utilised it to its full extent. He got deeply interested in computers and made an OS in his third year. The year was 2000 and the IT burst had just happened, fortunately this did not affect Varun's placement scenarios. NetApp had entered India and decided to hire from IIT Delhi. Varun was one of the four people hired by them for the US office.

Irony punched him right in the face as Varun reached the US. They found out that NetApp was laying off 200 of the US staff, while on the other hand it had hired people from India. The situation couldn't have been more awkward. Things turned out well for Varun in the US. He bought a sports car in three months. As time passed the comfort of an IT job settled in and Varun started getting bored and complacent.

In 2004, as colour mobile phones started entering the market and people stated using Internet on the phones, Varun noticed that the UI of browsers and the webpage layout is a huge challenge to solve. They started working on a new markup language and patented it. This led to the birth of Wirkle Technologies.

Founding a startup from zero capital and reaching multi-million dollar revenues is not something everyone can do. Varun had placed his bet on the future of mobile and he was proved right. The company started licensing the technology and they grew by leaps and bounds. To cut costs, they moved to India and also started a software servicing business. One of their major clients was Location Labs and they wanted to open an office in India. Location Labs acquired Wirkle Technologies in 2011, and Varun moved to head the India Development Centre.

While sitting in the Grofers office sipping tea, Varun talks about his biggest dream – To build the right technology to connect merchants and people. He says, "Most retailers and Kiranawaalas were left out of e-commerce wave. We at Grofers are connecting them. When a Kiraanawaala is left with some stock which might expire soon, he cannot put up Google ads to sell that inventory. However, he can offer discount on his leftover inventory on Grofers and this would benefit both parties (Kiraanawaalas and the customer). "

Despite spending a decade and a half at the crux of technology and watching trends grow, he has an incredible foresight and an innate hunger for doing things and revolutionising technology to make lives easier and better.

"I want to solve a problem which no one has solved using technology and to bring it to the point where people can't live without it," adds Varun on a parting note.