Pom Pom will pay you for your recyclable waste 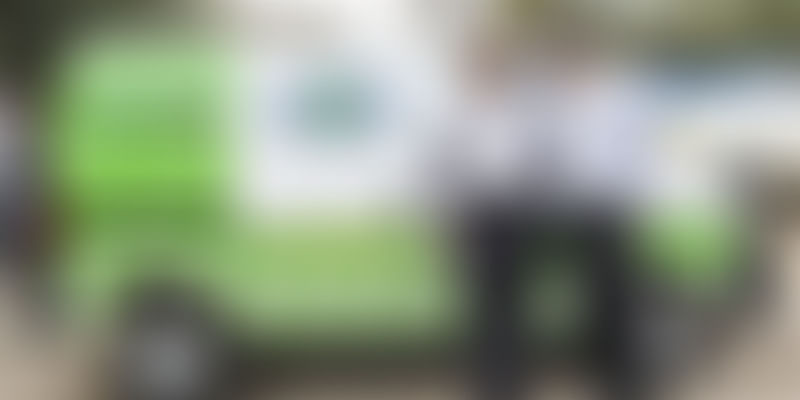 According to the Delhi government’s environment department, the state generates 8,360 tonnes per day (TPD) of municipal solid waste (MSW). Yet another study reveals that urban India generates 1,88,500 TPD (68.8 million tonnes per year) of MSW at a per capita waste generation rate of 500 grams per person per day.

It was the sheer waste of recyclable material that inspired Deepak Sethi and Kishore Thakur to launch the quirkily-named startup Pom Pom, which echoes the sound of the traditional horn by the old school kabadiwalla.

Pom Pom, a web-based recycling platform established in November last year, reminds people that recycling one tonne of paper can save 17 trees, and recycling one aluminum can save enough energy to run a TV for three hours.

Helping to dispose of recyclable waste in a responsible manner at one’s doorstep, while paying the best possible price for the same, the venture has started operations in South Delhi and promises to address the disposal needs of more than 1,000,000 individuals, as well as help them contribute to the Swachh Bharat Abhiyaan.

The founders themselves, with a combined administrative experience of 45 years, are an inspiring duo, being the brains behind the successful Delhi Waste Management Company, a subsidiary of the waste and waste water management company SPML Infra.

CEO Deepak, 36, earned an MBA degree from Australia’s Deakin University in 2002 and a bachelor’s in commerce from Christ College, Bengaluru. He has accumulated over a decade of management experience and is also a director of SPML Infra.

Kishore, 56, a commerce graduate from Delhi University, served the Indian Army in the Armoured Corps and is the COO at Pom Pom. He earlier worked as a whole-time director at Delhi Waste Management, and also as a director in more than five companies of the SPML Group. Under Kishore’s guidance, SPML was awarded the tag of ‘best service provider’ by GMR Delhi Airport for three consecutive years – a recognition that motivated him to establish Pom Pom.

“The inspiration for Pom Pom came from our experience in the waste management sector,” says Deepak.

They realised two things: Firstly, though efforts were being made to separate recyclable material from waste, the pace of work was slow; and secondly, there was a lack of awareness among people and no incentives to encourage households to sift at source.

“We saw tonnes of recyclable waste being discarded and ending up in landfills. That's when we decided to promote waste separation and recycling by paying people for their segregated recyclables. This would promote the concept of circular economy as well, which is producing-using-recycling. Our initiatives became the idea and Pom Pom came into existence. We are working towards sensitising people to the need for recycling,” he says, being thankful for an experienced team whose knowledge helped in developing and streamlining the processes.

Being more than the kabadiwalla

Pom Pom’s USP over competitors is its usage of electronic weighing scales to provide the right value for recyclables; quick payment at the doorstep; being just a call away; and transparency, with price per kilogram of all recyclables given on both the app and website.

After collecting the recyclables, the company further adds value to them by supplying them in bulk to industries that can use them to manufacture new products.

In the words of Deepak: “All plastic shopping bags, glass, and plastic bottles that we just throw away are 100% recyclable…. We not only intend to ease the process (of recycling) for our valuable customers but also make them feel that they are contributing towards their society and towards the Swachh Bharat Abhiyan by taking this one simple step with us.”

The founders invested about Rs. 1 crore in the venture, initially in app development and branding and later in vehicles, manpower, and warehousing. The revenue model is based on sale of recyclables. On the ground, they presently have 11 vehicles, one large Tata cantor, 10 Maruti Eco cars, around 30 staffers and other call centre employees. They are focusing on Delhi at first and are in early talks with schools and hospitals for the initiative.

“We aim to consolidate our position in the waste recycling space and will only look at expanding to newer zones and cities once our service both at the customer end and at the collection site becomes seamless,” says Kishore. He insists that it’s too early to give the turnover of the venture but is confident of breaking even in a few months.

There exist startups in the sector that buy dry recyclables like paper, plastic, etc., as well as companies in the e-waste sector.

“The size of the market is huge. We are, however, focusing more on creating awareness among people about recycling. We believe that if they understand how discarded material can be used to create new products, and how they can contribute to saving natural resources, their perspective towards waste will change,” he explains.

The only challenges we face, Deepak says, is of volume and changing the public mindset at the grassroots level, which is taking time. “Once we generate enough volumes, we plan to set up plants for recycling as well as expand to other cities. We aim to mainstream the top corporates, schools, banks, universities, institutions, government ministries, and offices into this recycling movement,” he adds.