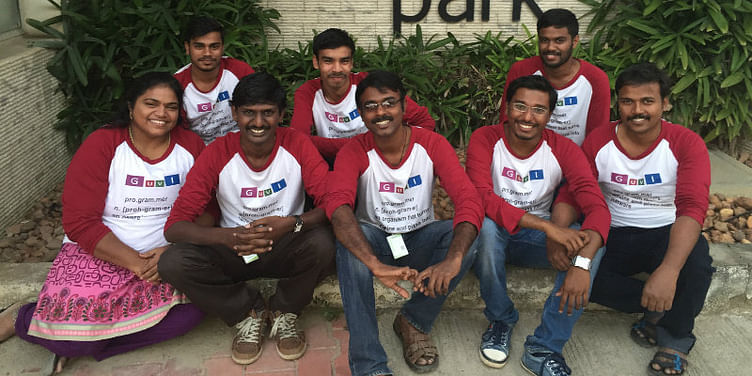 Arun Prakash was the first graduate in his family. The 33 year old completed his BTech from Sethu Institute of Technology, Virudhunagar, Tamil Nadu. As his family could not afford it, he did not own a computer and brushed up his technical skills by writing programmes on paper and running them on computers at an internet café. Things changed for the better, however, when he impressed the recruiters at Honeywell with his technical skills.

His professional journey for the next 13 years went off well with stints at Honeywell-Aerospace, KLA-Tencor and Kalido. Then in 2011, Arun, his wife Sridevi (32) and his friend S.P. Balamurugan (32) conceptualised the idea of GUVI. At that time, they were all working together at PayPal and decided to quit to dedicate more time to GUVI.

Chennai based GUVI provides a platform to connect budding technologists with industry experts and bridges the skill gap needed in IT companies, by sharing their technical learning as courses in vernacular languages and through a personalised mentorship programme.

On the startup's beginnings, Arun says,

GUVI started as a volunteering activity when we were working at PayPal in 2011. We started off with videos explaining technical jargon in native languages like Tamil, Telugu, Hindi, Bengali and Kannada. We got amazing feedback from learners not only from India but across the globe like UK, Canada, Germany, France, US, Singapore.”

The trio started GUVI with a seed capital of Rs 10 lakh until GUVI was incubated by IITM’s RTBI, an online mentoring or learning platform, focussed on IT-based technical learning in vernacular languages. The startup was then rewarded with a seed fund of Rs. five lakh.

GUVI was officially launched in November 2014 and its YouTube channel has gained more than one million views and has more than 5,000 subscribers.

Balamurugan holds MCA and MBA from Anna University. Before starting GUVI, he was a technologist at PayPal. Sridevi did her BE in CS from SASTRA University and her career at Honeywell-Aerospace was followed by stints at TCS and PayPal.

GUVI acquired its first paid customer through YouTube. He was from UK and wanted mentorship to learn design patterns in Java.

Each course by GUVI is a blend of video lectures that focus on context-based learning, short notes, coding playground, assignment and assessment. The video lectures are in vernacular languages, while the text contents are in English. The platform allows users the option to choose the language of his/her choice.

The learners use the inbuilt coding playground to practice and upload the assignments. The analytics system tracks the user activity and unlocks new content as they progress in each level. The game engine brings the gamification elements into the system and rewards the user with points and badges as the learner achieves the goal. The platform is hosted in AWS and is built on our very own custom-built web stack,” explains Balamurugan.

The startup offers courses from data structures, C, C++, Java, Python, ROR to advanced ones on big data, machine learning, R programming, IOS and Android. The charges for online video courses range between Rs 500 and Rs 3,000 and for mentorship, between Rs 15,000 and Rs 35,000.

GUVI has partnered with more than 50 colleges in Tamil Nadu, Karnataka, Madhya Pradesh, Odisha and Andhra Pradesh. Currently, 72 people from India, UK, USA and Germany have been mentored.

Sridevi says, “All the videos are home grown and created by friends who are experts in the IT industry. However, we have started procuring content from third parties also. The content undergoes many rounds of review by our content curating team.”

In the past eight months, GUVI attracted a user base of 14,000, among which 3,600 were paid customers. Majority of the users are from Tamil Nadu, Karnataka, Andhra Pradesh, Odisa and Bhopal.

In 2016, GUVI wishes to add 36 IT courses and 1,000 videos in the five languages. Arun says they are aiming to target 10 per cent of online learning market in India. The iOS and Android app for GUVI will be available soon for on-the-go learning.

The revenue generation started from July 2015 and till December, we have achieved an overall revenue of Rs 11 lakh. We expect to achieve Rs 35 lakh by the end of this fiscal year.”

According to a IAMAI and KPMG report, English language content accounts for 56 per cent of the content on the Internet, while Indian languages account for less than 0.1 per cent. But, a vast majority of India’s population prefers consuming content in their native language.

Availability of local language content can open up multiple avenues and opportunities for startups to leverage. Applications like InShorts, Way2News, Gupshup, Hike, Dailyhunt, Reverie’s Language-as-a-Service are focussing more on the local languages to cater to the ‘next billion’ Indian Internet users.

The number of local language Internet users in India is growing at 47 per cent year-on-year and has touched 127 million in June 2015, revealed the IAMAI and IMRB International report.