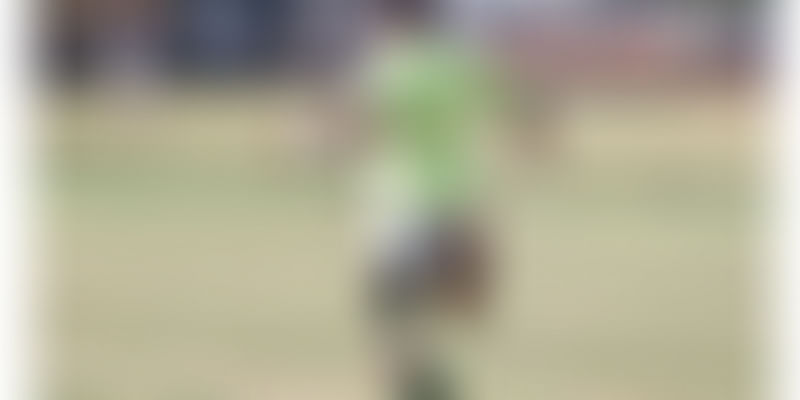 Life has the knack of seeming wearisome, unfair and impossible to even the best, most fortunate of us from time to time. As human beings, our only manufacturing defect is that our spirits are getting brittle, and our resolves more and more swiftly soluble in tornados of challenges. But there is a man with an agenda, who is fighting this cowardice. Vinod Rawat, in everything he says, does, achieves, overcomes, and conquers, speaks directly to the tired cynic in you, ordering you to smile first, and then get your act together and focus on the silver linings. Here’s his story as told to us.

“A truck ran over me when I was six years old. I was hospitalised for six months, where many shabby operations were performed on me. Eventually, because of a sum of Rs. 25, 000 that my parents could not arrange in time, I lost one of my limbs in a botched up operation that resulted in an amputation.

As they took away my leg, life, as I knew it, also escaped from under it.

When I was taken home, people started calling me names – what was the most baffling was that my own family rejected me. My father would look at me pitifully but at the same time embarrassedly. Whenever he would see a beggar on the street, a part of his heart would ache out of shame, for he assumed that I would end up the same way; that I was worthless. I would bear the brunt of this notion, and he would hit me, belt me like a dog. All I could do was beg him to stop and plead him to believe me that I was worth more, that I would not become a victim of circumstances and resort to begging, but his faith in me was shattered in me a long long time ago.

I struggled all through my childhood, as people tagged me a langda, pulled my crutches and, unknowingly, crushed my spirit. I was tired of this bullying from my own friends and family, and started looking for some solace from outsiders as I grew up.

I knew I had to find a way to make people look at me with fear and respect, rather than pity and ridicule.

That’s what made me join a local gang of goons. In Bombay, it was referred to as a bhai. I became that bhai. In my heart, I was just fighting a major inferiority complex and putting on a facade for defence, but I was turning into someone and something dangerous. I disliked that change, but couldn’t fight it until in 1994, the cops were on my tail.

Life, then, had hit a real low.

I was on the run, living life with the same fear as before, when I met a man, my messiah, on the streets one fine day. I was only 16, and my life already seemed too chaotic to handle, when this man held my hand, and said to me, ‘Son, what you’re doing is not your way, Jesus has a plan for you.’

I was a Hindu, yet, no one ever told me that my God was looking out for me, with such conviction and resonance. I felt, if God is real, he would get me out of this hell, and show me the way.The man asked me to join his NGO. I went diligently. I listened to his lessons. God says, forgive, be humble, find the joy in giving – and it need not be money. There is a joy in giving happiness, love and laughter. I found real meaning and truth in this philosophy.

I was ready to turn my life around, but stray incidents kept breaking my spirit. But soon, I learned to derive strength from them, rather than letting them get the better of me.

I was at the Taj once, when a foreigner couple with a really cute baby happened to be in my view. I wanted to simply let them know that I found their baby adorable, but they took me for a beggar and shooed me away. That was when I decided to learn their language, to be able to match shoulders with them.

Since then, I knocked on many doors to finally see my condition through. But back then, not many prosthetics companies offered their products for free. On the contrary, they were all killingly expensive.

I decided to work towards earning them. I started by founding a group, ‘I Am possible’, through which I did magic shows, but using that medium, I tried to deliver inspirational messages to my audiences. I found the joy in giving, and learnt that giving need not mean money, but also time, warmth and love. Joy of giving does not depend on giving when you have plenty; it is truly exuberant when you give something your all, in spite of having nothing.

And there was so much sorrow in the world, that everyone could use being reminded of their blessings every once in a while.

At 27, my life was finally about to take a turn that would solve most of my problems. Jaipur Foots provided me a prosthetic foot free of cost. I had always harboured dreams to walk, run, ride, climb, exercise. Without the bondage of crutches, my fate now returned to my own hands, and I was the only one standing in the way of my dreams.

I started training immediately. And athletics came to me easy. I became agile, skilled, even proficient, you may say, in various sports.

But one lifelong fantasy still eluded me. I always wanted to fall in love. To my greatest joy, that wasn’t far along. I met my beautiful, angel-like wife at my NGO. People always assumed that my wife would also be deformed or abnormal, and this is the attitude that I hate. Disability is only on my surface, it is not who I am inside. My wife is normal, and you know what – so am I, I thought!

We built a life together, and had two beautiful children. Between that, and my proactiveness in staying involved with events, life was starting to look worth living.

It was first in 2004, when someone told me about the Mumbai Marathon, and I was instantly attracted. I practiced day and night on Worli sea face. My neighbour started mocking me, saying ‘Aise bhaag raha hai ki tera paper mein naam aane waala hai.’ The next day, against all odds, guess what happened!

I saw the potential in me, and trained myself to not only perform day to day activities without strain, but also become fitter than the fit. At the end of my training, I embarked upon my dream adventures, and first climbed a Himalayan peak at 20,000 feet, and Maharashtra’s mighty Kalsubai.

Cycling and biking became my oxygen.

So much, that when I heard Roadies was coming to town, I camped out at the venue day and night to try my luck. The gates were almost shutting though, until the host noticed me doing some stunts with my bike. That was my ticket. I found myself looking right at Raghu and Ranvijay. I didn’t tell them about my foot. I wanted them to see me no differently. But they found out, and could not believe that they were seeing. I made it as the finalist, and was on the show until I got voted out. Disheartened, I returned, only to find a Karizma waiting for me, as a personal gift from Raghu, some days later.

I wasn’t even close to resting. I enrolled to ride to Ladakh, with a biker group, and even got through, but at the campfire when they saw that I had an artificial limb, they threw me out of their club saying they couldn’t take the responsibility of caring for a physically disabled person. I only thanked them, saying it wasn’t my loss, but theirs.

I founded my own club. There are so many Vinods in the country, who are discriminated against on such grounds, who when given the opportunity, will exhibit more skill and talent than most abled. I gathered them, and wanted to do something different – ride a more challenging bike, a heavier one. Bought the Indian Harley – Royal Enfield. Not only that, I wanted to ride for a cause.

And we did. Ladakh had a terrible cloudburst in 2010. Habitat for humanity was an NGO involved in relief work. The rehabilitation cost was at least Rs. 2 lakhs per house, so I decided to ride all the way from Mumbai to Ladakh and back to raise money for it. We also made one scheduled pit stop, where I spoke about this matter to get more and more people aware, concerned and involved. Under the banner “Beyond The Odd,” we raised Rs. 18 lacs. The Chief Minister of Jammu and Kashmir also gave me an award, and that day is one of my life’s greatest.

When I called my wife to tell her that we had done it, she responded saying, all right, now come back home, we haven’t been able to pay the rent for two months and might be evicted. I was so involved in helping the world, that I ignored problems that my most beloved were facing. This kept up, because she believed my priorities were not straight, and I only cared about my community work. Resentment kept filling the silences, until she asked to get separated.

I love her, I still do, with all my heart, and I know I will win her back.

I was nothing. Just a few years ago, I was a lost coin. Today, I found love, happiness, success and confidence. I speak in front of 900 suited up Americans and I can look them in the eye. I have a marketing job and I am an athlete. My wife is the loveliest woman. Whenever I meet people who complain about their problems, I simply tell them that God has a bigger plan for everyone, and that happiness is just under the surface, all you have to do is peep.”