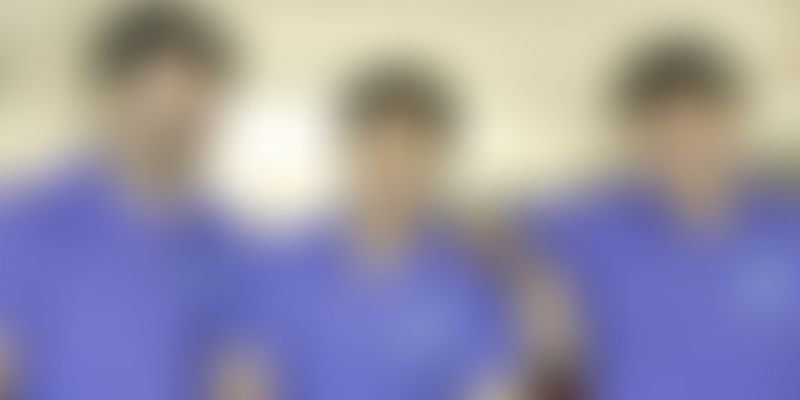 Learning, reinventing, and pivoting are the realities of being a part of a startup.

Living in such a reality are Farooq Adam (32), Harsh Shah (27), and Sreeraman M.G. (28). In November 2015, they pivoted from Shopsense, a B2B retail and inventory management solution, to Fynd, a B2C e-commerce marketplace.

Harsh tells us that when it came to downloads, targeted marketing did the trick. By the end of December last year, the firm was struggling with a mere 10,000 downloads of the app. In January, they started on-ground activations, social media marketing followed by ad push from mobile ad networks like InMobi and STG Media.

Co-founder Harsh tells us that the activations were apparel based, with graphic tees finding marketing done in colleges and startups while office apparels saw the team going to bigger offices in Lower Parel.

Today, Fynd has 97,000 downloads on Play Store with 8,000 on iOS. Obviously, Harsh and the other co-founders do not deny the massive experience that they carried from their previous business model.

E-commerce with a twist

But here’s the twist: Fynd is not like its other contemporaries in the market, rather it focuses more on helping the existing offline stores come online without changing any dynamics. Harsh explains,

“The growing concern for brands today is selling their latest in-season fashions, with a push to exhaust most of their inventories through people buying from original offline stores rather than through online discounting models and marketplaces.”

Fynd aims to partner with offline brand stores near your vicinity, giving you the latest in-season fashion at the store price, while applying discounts only when there is a discount in the store.

How is that customer-friendly? Harsh replies by saying that the following model reduces the delivery time from days to a mere four to six hours. The customers also get fitting option ‘Fynd a Fit’, where if a certain consumer has asked for a size M, a size L will also be carried by the delivery personnel to be sure of the fitting. In case the size is right, then customers can take one of the offered options or return the product altogether.

Harsh rebuttals further by saying the basics of e-commerce remains the same. Instant gratification and best customer experience is what will get customer loyalty, while discount is just an added layer to the offering. He also doesn’t deny the importance of current in-season fashions, which according to him, his contemporaries are not showcasing.

“If online discounting is such a huge thing, why is 90 per cent of the total urban market buying from offline stores today? 85 per cent of the inventory of most e-commerce players today is old, followed by a mere 10 per cent which is current and in trend. For us every store is a stock point, and we are helping stores from keeping separate products for online markets, while assisting their sales.”

Harsh says for brands, fashion comes of equal importance as selling. However, the co-founders don’t deny the fact that Fynd has partner stores for sourcing products in places like Guwahati, just to be on the safer side.

In November last year, Shopsense raised an undisclosed amount of pre-series A funding from Kae Capital, Kunal Bahl, and Rohit Bansal as investors to go bullish on their B2C platform, Fynd.

Presently, the firm claims to have above 103 live brands on the platform while having 12,000 stores and stockpoints across the country. On an average, Fynd handles about 80–100 transactions daily with an average ticket size of above INR 2,000.

The firm also claims that the current traction is growing at 30 per cent week-on-week, with December witnessing a mere 10–15 orders daily. In December last year, the application had only 10,000 downloads, with as many as 29 brands live on the portal.

Following an app-only strategy, 65–70 per cent of their orders are from unique customers, with men’s T-shirts and women’s tops being the highest sold categories. Nike, Being Human, and Fab India are the most purchased brands.

As a practice for increasing their sales, Fynd also holds campaign partnerships which is similar to ‘Brand Days’ held by other e-commerce websites. According to Harsh, brand partnerships lead to 38 per cent of conversions on the platform in terms of sales. “We recently held Bhai ki Party’ for Being Human and partnerships for Nike and Puma around the Mumbai Marathon, the response to that was phenomenal.”

On a revenue front, the firm charges a commission of 20 per cent from brands for every transaction made or product sold. The firm also plans to expand their presence to Delhi and Bengaluru by the end of next month, with Pune also being in the radar of expansion. With the valentine fervor getting over, according to Harsh customers can also expect newer collections and fashions from this week followed by super-fast delivery and campaign partnerships around the T20 world cup.

Although these metrics seem impressive, one has to realise that these figures is from a newer player which is finding ground. With the business taking its course, we’ll have to watch out whether Fynd keeps up with its conversions and is well received in markets like Bengaluru and Delhi.

Moreover, looking at the e-commerce pie, Fynd’s contemporaries like Jabong have not really been able to fire all cylinders with their backers, Rocket Internet trying to sell away the business. The game is also getting fiercer with Snapdeal trying to strengthen its fashion focus through acquiring Exclusively.com. Amazon is also trying to ramp its popularity on their fashion offerings by providing high discounts. Their direct competition Myntra says that they are on a high road to clock $1 billion in GMV in 2016, with their app-only strategy still being on a testing plate.

With such strong established players in the market, we will have to see how Fynd will register its uniqueness into the hearts of customers through fitting and same-day deliveries.