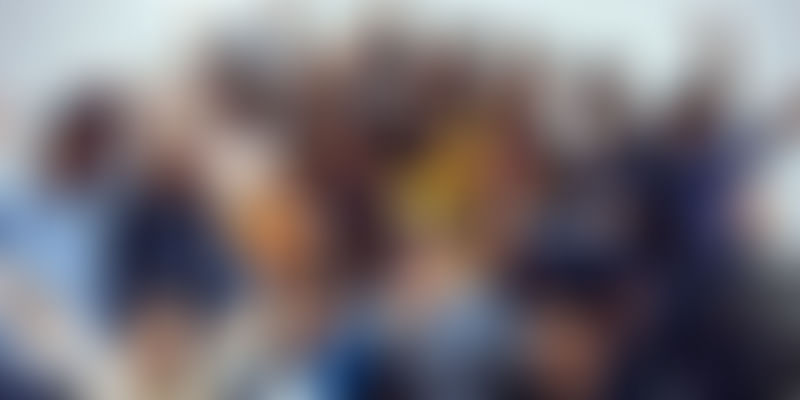 The corner office of the swish YES Foundation floor at the Indiabulls Centre in Lower Parel, with the best view of the city should serve as a good enough indicator of success for you; but the story behind it will make the victory seem even sweeter. Adorning that chair is someone who, at the end of one hour, by simply being, convinced me that life will be beautiful, fair, and fruitful to all those who know how to truly value and make the most of their finite time on the planet. Yes, she has a way of wringing out the spiritual side in people, as she did in me. All this and some more life-affirming anecdotes and learnings on success, soul, and spirituality constituted my heart-to-heart with 41-year-old Prerana Langa, the woman who helped build YES Bank’s YES Foundation.

Coming from a modest background, she was raised in an all-woman family having lost her father at an early age. “A sense of pride, abundance, and independence governed my childhood. My mother was a strong pillar and role model. She was also an entrepreneur, and opened up her own beauty salon.” Prerana studied science from St. Xavier College, pursued her MBA from SIES College, and took her first steps in the industry she would lead one day.

She started at the bottom, much like all of us, with an event organising and direct marketing and promotions job at Mudra communications, after which she joined Weber Shandwick, the worldwide PR agency, which gave her hands on experience with clients and their crises alike. The most noteworthy being the McDonald’s beef controversy, which Prerana was in charge of righting. “I’ve always wanted something to do with people,” she explains, of her stints entailing building relationships and connections with people.

One of these very occasions where she was required to establish connections, was what laid the foundation to the career she has built for herself today. Her hard work led her to ICICI bank, where she had joined the microfinance team. “That was a turning point. As microfinance entailed dispensing small loans to people in need, I thought I will be meeting impoverished people in need of dire help. I went on a project to Guntur district in Andhra Pradesh, to meet prospective beneficiaries. I dressed up in a simple salwar kameez, thinking I am going to meet people suffering from deprivation. But, when the head of their community organisation Spandana showed up to get me at 6 am, she was dressed impeccably in a silk saree and exquisite gold jewellery.

All the 20 women I was led to were well-dressed. They sat with their children, while their husbands stood at the back, letting the women make their own decisions. They had a sense of pride. All of them entrepreneurs, they knew the value of money and how to do business. I realised that they were all brilliant, all they lacked was access and opportunity. They didn’t need any favours from us. In fact, they’d be doing us a favour, associating with us. It was an honourable opportunity for us, in fact, to serve them, by giving them access. So, that was a big turning point in my life.”

This incident opened up her eyes to the social sector. This new approach, of enabling, rather than hand-holding the marginalised and untapped section of our country went on to become her goal in life. Out of all the people in ICICI, she was chosen to help set up ICICI foundation, with Dr. Nachiket Mor. “Taking something this enormous on was a great challenge for me at that juncture in my career. I’ve never had to summon my management skills more than at that point,” she says, but her efforts did not go unrecognised. Soon, she was headhunted to replicate her efforts in doing for YES Bank, what she did for ICICI. Laying the foundation stone of YES Foundation, she was soon thrown into the grind of building a very special type of startup, with the name and reputation of a great brand to uphold.

“I’ve had challenges typical to a startup – where I was expected to be the master of all skills, be it managerial, secretarial, financial, executive, or even clerical – I’ve done it all,” she says, adding that the experience has been nothing but immensely gratifying. At YES Foundation, she had the opportunity to be mentored by another veteran, Mr. Rana Kapoor, whose guidance was “visionary and inspiring,” she says.

One of the main goals at YES Foundation, under Prerana’s tutelage, is harnessing the youth population of our country and making them productive. “We want to connect the youth to social issues – so that they use their passion and enthusiasm to bring about change. They need to not only to be exposed to issues, but also to be made to feel strongly about them – they must be shown real challenges in their surrounding, which they can take on as challenges themselves.”

One of her greatest challenges – and milestones, too, incidentally – is pulling off a record-breaking “YES, I am the CHANGE” short-film making competition, which, this year, saw five lakh participants and touched 20 crore lives.

“People from Lakshadweep to Kashmir participated, and there were some entries that made the whole exercise worthwhile for me. Like this 22-year-old boy Kuljeet – who participated from Delhi. He made a film on sex workers and told us how his entire perspective has changed towards the community. And this year, as a result of his film on animal cruelty, he was driven enough to create a digital portal connecting people to animal rescuers.”

“Expression is as important as any other human need, I believe. And with my work, personally, I not only want to give the youth a voice, but also enable them to give voice to the voice-less, by bringing up unsung heroes and documenting their stories earnestly. We keep this aim and principle at the heart of most of our projects,” says Prerana.

Lessons from her journey

Prerana says that her only true growth hack is something as sincere as constant hard work. “I have worked very hard. There were no shortcuts, no easy way out, no godfather to take me through every rung of the corporate space. I have achieved it through actual physical hard work,” she says.

“The reason I am happy and successful is because my professional goals are directly aligned with my personal goals. I’m proud to be Indian. I not only want to contribute to the welfare of my family, but also my surrounding. And now that I am getting the chance to do that, there is no reason why I can’t do this for the rest of my life. It is an extension of what I would have been doing personally as well.” Outside the four walls of her office, she also contributes to animal welfare organisations, women empowerment, and senior citizens.

As a teacher for the Art of Living programme, and someone who has sworn by meditation for over 20 years, Prerana believes there is serious merit to meditating for at least 20 minutes a day.

“Spirituality has also given me a lot of strength. It lets you detach from events and focus on being positive. I teach meditation as it feels good to give someone else that positivity and relieve them of stress. I highly recommend it. Our time on this planet is limited, and spirituality helps you take the best of what life has to offer.”

And she does so by truly appreciating the joys of womanhood. “Being a woman is a treasure – you bring so much to the table. Women are meticulous and want things to be perfect. That is why working with a woman can be more daunting, if you ask me, because we are such sticklers for detail! We put our heart to our tasks, and take it very personally to deliver.”

“I go on trips and spiritual retreats. I’m also always learning new things. I’m constantly building my skills, like the voice training programme that I recently completed. I keep upgrading my skills. Time is limited, make the most of it. I want to use my skills to be of help to other people in need. If I had a wish, it would be to see everyone happy,” she says.