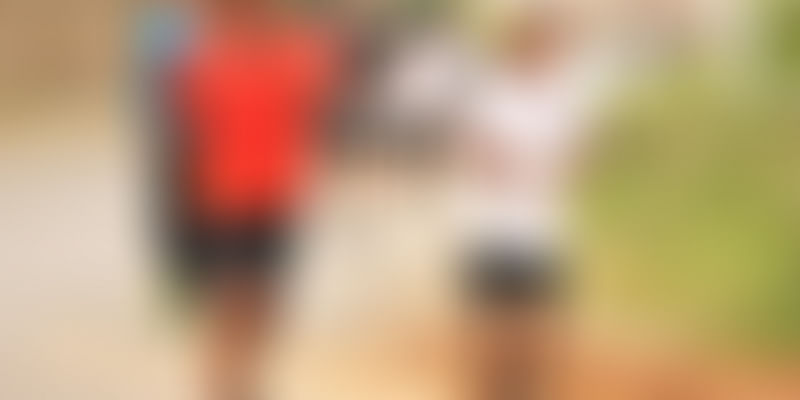 Working in a startup often comes at the cost of everything else, including your health.

To remedy this, last June, I decided took part in the Bangalore Alpha League - a 5km obstacle race. Though it was easy for me to clear the obstacles, I couldn’t go the distance. I could not run even 2 km, and this realization was hard hitting.

I spoke to Sujith, a friend who is an assistant trainer at Reebok Running Squad to help me become a better runner. Reebok Running Squad, commonly known as RRS is a community of running enthusiasts with branches all over India. Sujith asked me register for the Bengaluru 10K challenge, which was to take place on 12 July 2015, and prepare for it as a goal. I had around one month. The following Saturday, I was up at 4 am and left home by 4.30 am to reach Kanteerva Stadium by 6 am to join RRS Cubbon park and train under the leadership of Neera Katwal, the head coach at RRS cubbon park.

I was excited to start running and to be able to run. The excitement was similar to starting up. It was a new project. Though there was no guarantee,my goal was to go from zero to 10K in less than 30 days. I only had basic experience of running from my school days,which admittedly was a long time ago.

On the first day, everything began on a high note with a warm up, pushups, sit-ups, burpees. However,I found myself glancing at my cell phone and realised it was just 7.10am, and we still had 50 minutes to go. I was secretly praying to somehow speed up the clock. Each stretch became harder to do.

From the next week, I started to run twice a week at my home. I started with 2km and increased the distance every week, gradually. During that first run, I could not even run 2 km;I had barely completed 1 km,when I started thinking about walking and my knees started to give way.

I finally succumbed to that thought and started walking;the worst part was that there was no one to encourage or motivate or even to push me to run. I realised this is what happens when you are a sole founder. There is no one you can talk to or who knows what you have been going through.Only your fellow runners, or other people who have started up, understand.

During the next run, I decided no matter what, I would not stop. The pain in my knees was less compared to the last time. Maybe I was adapting to it,just as we adapt to rejections when we tell people about our idea, and they convince us it won't work.

While training over the next two weeks, I realised that this is more of a mental battle that persuades us to give up. And when people also set against you, and are constantly reminding you why you can't make it, self-doubt often creeps in. However, it is always about perseverance. The next two weeks were a breeze and I was able to run 7 km by Week3. Confident of my abilities, I skipped practicing the next week and went for the Bengaluru 10K Challenge.

One could see people stretching and warming up prior to the race, which had every facility like water and a medical camp. By 6.20 am, people started lining up at the Start line.As the digital clock stuck 6.30 am,the race began. The crowd was full of energy and spectators were egging us on.

In about five minutes,I saw the first banner indicating that we had crossed 1 km. It was like reassurance and validation of an idea, when we first embark on the journey to startup. The time seemed to fly unlike in training runs where one had to run alone with constant thoughts of quitting. This was the perfect way to understand the importance of an ecosystem where everyone is on the same path as you.

There were all kinds of people running–people who were overweight, old and young people, even children. Like startups, there was a distinct advantage as most of the top prizes were bagged by people who were under 25 years of age. They were in their prime after all.

At the 2.5km mark, there was a water station;I thought I would be able to get away without drinking water as I wasn’t thirsty and had ample energy left. But soon, I was getting tired and severely dehydrated. I was never this tired during my training runs. Maybe it was due to the fact that I did most of my training in the evening and the sun wasn’t as harsh. Also,I was training on green trails and this was a concrete road with few trees around. Whoever said reality is different than the scenario we imagine was perfectly right. I also learned an important lesson “No amount of training will prepare you for the actual race. There will always be a huge gap in what the customer wants and what you think he wants.”

Finally, I had my sip of water at the 5km mark and was quite recharged. As the race continued,my left knee started paining at around the 7 km mark. Maybe I shouldn’t have slacked off during the last week,believing I could do it when the time came. Soon my run changed to a jog, and I was desperately looking for the next distance marker, which was nowhere close. I could see more people walking/jogging and few even leaning on their knees and panting profusely. The fact that we were so close to our destination made it tougher and the temptation to quit was strong.

This was when I realised that the journey is not as easy as we think it is. There will be no reprieve from suffering and you will be tempted to quit when difficult times come. It will be very difficult to share your pain as you will see everyone else fighting the same battle. As my pace fell to a jog, someone came from behind and started encouraging me. “Come on, it’s just a few more steps, only 2 km left. You’ve already done 8km. Come on, you can do it.” I felt a surge of energy. This is what I needed– a few words of encouragement, even from a stranger, mean a lot when you are going through rough times in your venture.

The race came to a close and I mentally applauded myself for not stopping or giving up midway. There were a few lessons I learnt the hard way. I also realised that running is quite similar to starting up. It is a never ending journey, not a one-month checkbox goal. I also realised that like running, anybody can startup. There is no requirement that you have to be from a certain background to startup. However,passion, planning, and preparation are absolutely necessary.

Once you get into the market, things will not be as easy as you penned down on your business plan. There will be a few people supporting you, while others will be busy running their own race.

There will be times you will need external help, be it in terms of funding or operational support. Everyone needs their sip of water. However, you can minimise that with more practise–that is having more experience when it comes to managing resources by working in a startup prior to starting on your own. The best sip of water is to drink when it is available, not when you need it, for it might not be available then.

Finally, I learnt not to ignore physical wellness when you work in a startup. We might pay later and the cost will be high.