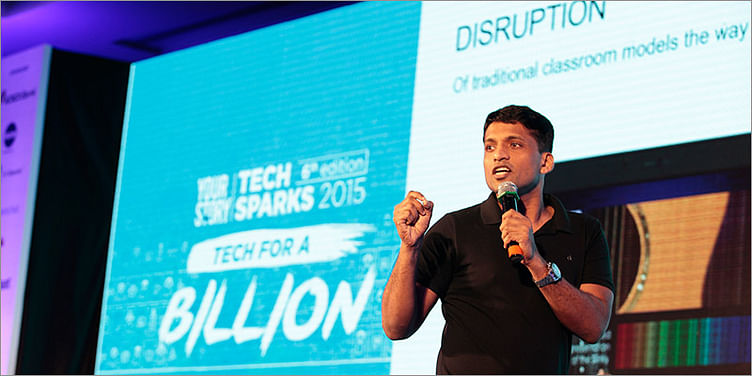 Byju's has raised $75 million from Sequoia Capital and Sofina in the largest fund raise by an edtech startup in India. The five-year-old company, which recently started focusing on an app model for delivering lessons, will use the funding to expand its product pipeline, launch in new markets and to increase its talent pool.

"The focus will be to add more products, more grades and expand to English-speaking international markets over next 12 to 18 months," says Byju Raveendran, Founder-CEO of Byju's. Professional certification firm Simplilearn is one of the few edtech startups in India to have gone global.

Byju's started off small in 2011 as an offline test prep provider for exams like CAT, GRE, GMAT and the Civil Services. It then expanded into coaching for school students. While Byju's is known for conducting massive sessions in stadiums, the inflection point for the company came about when it launched its app. The company says, since the launch of the app six months ago, it has seen 2.5 million downloads and over 120,000 paid annual subscribers.

The real problem is you have a very large, aspirational set of students who do not have access to teachers. Here tech can be used as an enabler and it can help you understand how the students are learning. With our app we understand what they learn, when they learn and most importantly how they learn and how fast they learn. The data we collect from individual students and sets of students in the same age group gives us competitive insights," says Byju.

He says there is greater engagement thanks to the high-quality movie-like videos that are created to impart the lessons. Byju's videos use graphics and other video tools to explain concepts and theories. This, Byju's says, has helped keep students engaged for an average of about 40 minutes per day. The retention numbers are at around 90 per cent.

"What excites us about Byju is not just the market potential but also his sheer commitment and passion to democratize access to education in India in a way that’s never been done before. Byju and his team are pushing the boundaries for how immersive media and technology can deliver superior education for millions of students, anywhere and anytime,” says GV Ravishankar, Managing Director, Sequoia Capital India Advisors. Sequoia was the top investor of Indian startups in 2015 with 46 investments.

India's education market is estimated to be worth about $100 billion. In recent years a number of edtech startups have launched in segments ranging from online test preparation to technology tools that assist in teaching. Simplilearn, Embibe, Toppr and EduKart are just a few of the emerging young companies in this rapidly growing industry.

Byju's has previously raised about $40 million from Sequoia and Aarin Capital. The company claims to be seeing a 20 per cent month-on-month growth and adding about 20,000 students a month on its platform. Byju's is targeting to expand its reach to 300,000 students in the next academic year.