This trio is ‘Making in India’ for the European markets 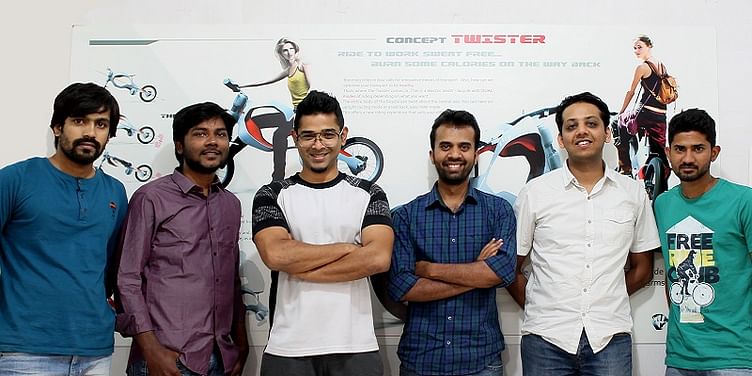 The thought of riding a cycle to work seems rather appealing, but the idea of heading to office sweaty and showering there puts most people off. Wouldn’t it be great if there was a vehicle that gave you the convenience of a motorbike or scooter while rushing to work and the exercise benefit of a cycle while heading back from work? This is exactly what Narayan Subramaniam, Niraj Rajamohan and Preetham Murthy are building.

Over the past year, Ultraviolette has been looking at innovating personal mobility. The team is looking to solve the fundamental problem emerging in the urban lifestyle and transportation space.

While doing his Masters at Umea, Sweden, Narayan saw how people were beginning to view mobility in Europe and Asia. Narayan and Preetham, who was then working at his own waste management firm, decided to start Ultraviolette.

Preetham says the idea of Ultraviolette resonated at a personal level. As a student in San Francisco, he had found it difficult to ride his cycle at all times, and what Ultraviolette was building made practical sense.

“We started off in a small room in Koramangala and began working on the initial core design and raw prototyping. One of our core IPs was design, we wanted to make most things in-house, but we also knew that the different iterations would cost money, so we went in for a large-scale 3D printer,” says 30- year-old Narayan.

A few months later, Niraj, who was working on his own venture HereNow, joined as the third co-founder.

The trio decided to down their focus to two fundamental aspects –personal mobility for the first and last mile of the commute, where public transport is established, and building a vehicle that suited an individual’s mobility and exercise needs.

“Vehicles aren’t adapted to our lifestyles. Our need for exercise hasn’t been considered when we look at the motorcycles, and the cycles don’t account for our need to travel somewhere quickly,” adds 30-year old Preetham. This led them to create Twister.

“The Twister is built differently, it works as a cycle and a bike. The frame can be rotated 180 degrees; in one mode, it offers you the ergonomics of cycling. The other mode offers you the ergonomics of riding a bike. Unlike the cycle with a motor, the experience, seating position and the performance of the vehicle is different in the cycle and bike mode,” adds Narayan.

The team says it considers all aspects of our social and urban lifestyle and fuses them with mobility. The initial designs and prototypes were worked on by Narayan and one of the core team members Karthik Kannan.

While there are cycles with motors available in the market, they are fundamentally meant to be a cycle and are retro-fitted with a motor. So if someone is looking to travel long distances, it doesn’t work.

Gliding to the Twister

The team realised that working on the prototype for Twister would cost money and they would need more resources, especially to get the IP in place. “We knew we couldn’t take a few sheets of paper and go to the investor and say this is the idea so invest in us. We had to have a functional prototype,” adds 30-year old Niraj.

To raise the funds to begin work on Twister, the team began with Glide as a design on paper; after software validations, they procured standard motors and batteries off the shelf in South East Asia. Most of the body and components were 3D printed.

Once the prototype was ready, they created a video to present to investors, most of whom liked the idea, but were unwilling to take a risk. Narayan adds that finding the ideal match between them and investors took time. “We needed to find someone who was willing to bet on something that wasn’t yet a trend in our country,” he says.

The team raised an undisclosed amount of angel funding from a Chennai-based investor. Twister went on to win an Excellent Design Award, and was showcased at the International Bike Show, Taiwan in March 2016.

However, building the initial prototype wasn’t easy. Although they had the idea on paper, extracting functional essence was a challenge. It took various iterations to get the right match, Niraj says the product would look great at the workshop, but once they got it into their studio, they realised it needed changes.

“We are working on improving the efficiency of the batteries in terms of charging and thermal efficiency to make it safe even if you use it in a very high performance mode. You will see the same kind of technology that goes into the Tesla,” says Niraj.

This year, the team will have a soft launch and conduct pilot studies at Germany, Sweden and Amsterdam; go to universities and towns; and launch in the European markets in 2017, priced between $3,500-5,000.

While the design, manufacturing and assembly will happen in India, Ultraviolette will be tying up with vendors in Taiwan and China for high-precision manufacture. They are also working on a performance based two-wheeler for the Indian market, which is in its R&D and ideation stages.

The market of EV

With the government targeting 100 GW of solar by 2022, and an ambitious plan to put seven million electric and hybrid vehicles on the road each year by 2020, the industry is likely to gain pace.

Japanese Terra Motors started selling electric scooters in India in 2015 and announced that they were building a $5 million plant in Gurgaon. At the Consumer Electronic Show 2015, Gogoro announced the Gogoro Smartscooter and Gogoro Energy Network, a battery-swapping network.