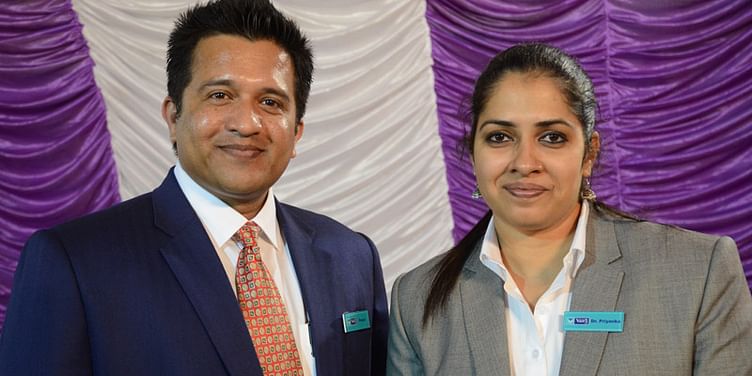 What’s more disruptive than a hybrid of cooler and air conditioner that comes at a tenth of an AC's running cost? This means electricity consumption of only 250 Watts per hour, compared to an air conditioner that consumes 2,400 Watts per hour. So if you were paying Rs 5,000 per month (air conditioner), you will now pay around Rs 500. And wait, it’s environment-friendly too, as it is possibly the world’s only cooling product that uses the refrigeration cycle but does not emit heat in the environment.

Vaayu Hybrid Chillers — a patented technology — acquired a funding of Rs 1 crore under collateral-free CGTMSE scheme of the state government of Madhya Pradesh through Corporation Bank, Indore. The startup has its manufacturing unit, constituting two plants, at Sanwer Road in Indore. The product has been tested for more than 100 units and the company is getting bulk orders from companies that care about environment and cost-saving. It has reached six states — Madhya Pradesh, Chhattisgarh, Maharashtra, Delhi, Haryana and Uttarakhand, through its appointed dealers and distributors. These dealers are selling Vaayu to retail customers.

“Also, since the product is a new concept, we are opening 'Vaayu Experience Zones’ for customers to get a feel of the Vaayu cooling. We have also appointed sales and service dealers to cater to the needs of the industrial and commercial customers,” explains Pranav.

Too good to be true?

Disbelief was a common reaction the founders — Pranav and Priyanka — received each time they made a presentation about Vaayu. “We were once presenting before a team of scientists and science professors and most of them said that our product defied all the laws of thermodynamics,” quips Priyanka.

So how does Vaayu work exactly? “As soon as Vaayu chiller is switched on, the compressor starts and the refrigerator flows in the cooling coil to chill the water. This water reaches the pads of the machine by pumps. The hot air outside comes in contact with the chilled water and the molecules present in the hot air lose temperature. The thermostat helps to put the compressors on and off as per the need of the water temperature to be maintained and prevents overheating. The condenser cools down the refrigerant and helps in dehumidification of excess RH to control the humidity level. The chilled air is finally pushed inside the area where the unit is installed through a fan of the machine,” informs Pranav.

In short, Vaayu doesn’t make you shiver like an AC but basically brings the temperature to a legitimate level and controls the humidity so that the environment becomes pleasant.

Vaayu chillers look like coolers and ACs so to make them workable in terms of installation and to meet customer needs. “We have recently launched a revolutionary product, VAAYU MIG 24, which has a capacity of cooling 1,000 sq.ft., and consumes only 800 Watts,” says Pranav.

The company intends on expanding to ten more States in the financial year 2016-17. “In the next five years, we plan to go pan India and also start exports, as we have received enquiries from Mexico, UAE , Africa etc. We are planning this expansion through sales returns along with expecting to get some funding through VCs,” he adds.

Priyanka, Pranav's wife, did most of her post-graduation studies after marriage. Pranav — a commerce graduate with a diploma in HVAC (heating, venting and air-conditioning) — worked as a product manager in multinational companies such as Carrier, Samsung and LG for almost 14 years. But being a technology-curious person, he started his own venture of commercial AC sales and service in 2008, and commissioned many noted projects in Madhya Pradesh. Priyanka, in the meantime, acquired an MBA in Marketing (Prestige Institute Indore) and PhD in Management (Devi Ahilya University) and apart from writing research papers, had begun giving lectures in various institutes in Indore.

“Initially, Pranav’s office used to be at home, so during the summer of 2010, his father pulled him up for heavy electricity bills, since his team used ACs. So one, day he got a few components of AC and they all began working with coolers. When I asked, I was told they were trying to see if a compressor could be fitted into a cooler. I seriously thought this must be one of his whims since he loved experimenting with electronic appliances and machines. Little did I know back then that he would end up inventing a technology we would patent later,” says Priyanka.

Pranav points out the importance of marketing the product. “Twice we had a choice between getting a lot of money from investors and selling out the patent. However, becoming millionaires just like that wasn’t exactly our goal,” shares Pranav.

Sometimes, the couple find it hard to come to terms with the fact that they have come this far. “But then we remind ourselves of what late Dhirubhai Ambani had said, 'Think big, think fast and think ahead. Ideas are no one’ s monopoly',” says Priyanka.

Vaayu recently won the Mega Launchpad — an event co-sponsored by YourStory Media. And their latest award is the Skoch Order of Merit and Skoch Best SME of India Award at the Constitution Club of India in Mumbai held recently. In addition, they are one of the top five startups chosen by the Government of Madhya Pradesh for the Prime Minister’s dream project 'Start up India Stand Up India'.