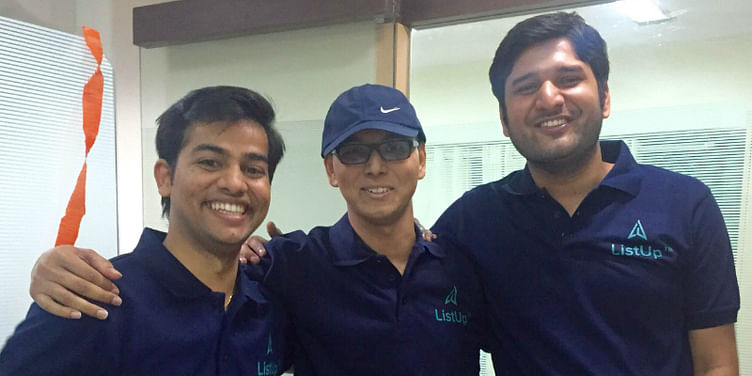 ListUp is a peer-to-peer (P2P) social buying and selling community for second-hand goods. A mobile-only product, it aims to differentiate itself from existing customer-to-customer (C2C) commerce platforms in the market by leveraging social connections for authenticity and includes a hyperlocal element, to ensure quicker transactions.

With verified user profiles, ListUp also allows users to bargain with sellers through an in-built feature, and ensures that all conversations happen over chat without spilling over to emails or other channels.

The seller can list and upload items across nine product categories – like books, mobile phones, home appliances, and others – along with relevant information, pictures, and also mentioning if they are open to bargaining. Through a combination of manual intervention and automation, ListUp ensures that the product is authentic(not illegal) and approves the listing.

Potential buyers and sellers nearby (1 kilometre or more) can then interact with each other over chat and try to reach an agreement. The product is then moved from the ‘active’ tab to ‘Sold’ under the seller's profile.

ListUp was founded by Sumit Gupta, Pulkit Gupta, and Saurabh Jain in 2015. It currently consists of a 20-member team based out of Powai. The startup places great emphasis on technology. Sumit added that 60 per cent of their team focusses on product and technology.

In June 2015, Sumit decided to quit his job at Sony in Japan and work on a startup idea with his friend Pulkit. During his stay in Japan, Sumit faced a lot of difficulty in furnishing the one room apartment that was allotted to him. He tried classifieds websites, Craigslist, GaijinPot, Facebook groups and even visited second-hand shops, but wasn’t successful in getting the products he was looking for. He came across many startups trying to organise the second-hand goods space in Japan, with Mercari being one of the market leaders.

Sumit and Pulkit realised that there was probably a market gap in the second-hand goods space in India too. They experienced it first hand; Sumit found an unfurnished apartment in Powai Valley, but after a lot of struggle trying to furnish it, he decided to opt for a furnished flat instead. These experiences made him realise that there was a market for a C2C platform that made it easier to buy and sell second-hand goods.

Based on their experience and market research, they realised that the key to cracking this problem was adding authenticity and making the discovery of products happen at the hyperlocal level. Sumit explained,

I figured out that most of the stuff that I was hunting for was in fact lying idle with my friends. They no longer had use for it and would have loved to sell it to me, if only they knew I wanted it right then.

So in August 2015, Sumit and Pulkit, IIT Bombay alumni, worked on a mobile app with acquaintances from IIT Bombay and with help from freelancers. Once the basic version of their app was ready, they realised the need for a technical co-founder to help them further streamline the product and make it more user friendly. At this juncture, they were introduced to Saurabh, NIT Agartala alumnus, through mutual friends.

At the time, Saurabh was working as a tech lead with a well-funded startup and had previously worked with WorksApp Singapore. After a series of meetings, Saurabh got on-board with them in October 2015, and the three of them started working on ListUp from their flat in Powai.

Related read from 2015: How IIT Bombay is spawning the startup culture in ‘Powai Valley’

They found that existing platforms seemed more like a plain directory of listings arranged in the order of timestamp. Most of them did not leverage mobile technology in connecting the right buyers and sellers with each other. So ListUp worked on providing a more user friendly and social experience for users.

After a few months in beta, the team finally launched the final version of their app to the public in early 2016. So far, ListUp has seen over 10,000 installs with around 1,500 product listings. Sumit added that their per-session engagement has been around three minutes on average. While a large chunk of ListUp’s users are currently scattered around Mumbai, Sumit added that they have seen activity from parts of Delhi, Ahmedabad, and Bengaluru and other parts of India. Some of the popular products on ListUp include fridges, watches, books, television, antiques, tickets(for cricket matches), etc.

ListUp is currently focussing on their product and getting more users on their platform. Sumit added that they have multiple plans in place to generate revenue in the future, once they reach critical mass of users. Currently available only on Android, the startup plans to launch their iOS app within the next three weeks. They are also working on totally automating approval and rejection of product listings.

In a value-conscious market like India, there seem to be many takers for second-hand goods. The whole sector was estimated to be worth 1,15,000 crore in 2015. Quikr and OLX are the most popular classifieds platforms in India because of the sheer volume of products listed on both platforms. After acquiring mobile-only marketplace Shopo in 2013, Snapdeal relaunched it as a zero commission marketplace in July 2014. Smartphones, automobiles, furniture, and pre-owned clothes are seeing a lot of interest from buyers and sellers in the second-hands good space.

On the global front, Mercari, a C2C marketplace app, recently became Japan’s first startup unicorn having raised a $75 million series D round. Singapore-based Carousell, which raised $6 million series A round from Sequoia Capital, Yahoo auctions and online auction and e-commerce giant eBay are other interesting players operating in this space.

While ListUp lives up to its promise, most of its activity is currently restricted to Mumbai. So users in other cities may not immediately see value in a C2C platform, as optimum number of buyers and sellers are needed to keep them engaged.

Adding a public bidding or auction model for some product categories like antiques could help accelerate growth and interest among buyers and sellers. Also letting users set up custom alerts, when particular products they are interested in are uploaded by sellers, could further speed up the buying and selling process.

ListUp is a well-designed and thought out app that lives up to its promise as a C2C marketplace. The social aspect and the hyperlocal element are its USPs, which help it differentiate itself from others in the space and also add value for users.

The inbuilt bargaining tool, chat feature, and map integrations add to the ease of use and makes the entire process more streamlined for buyers and sellers. ListUp’s search bar and custom filter for categories also make discovering specific products easier.