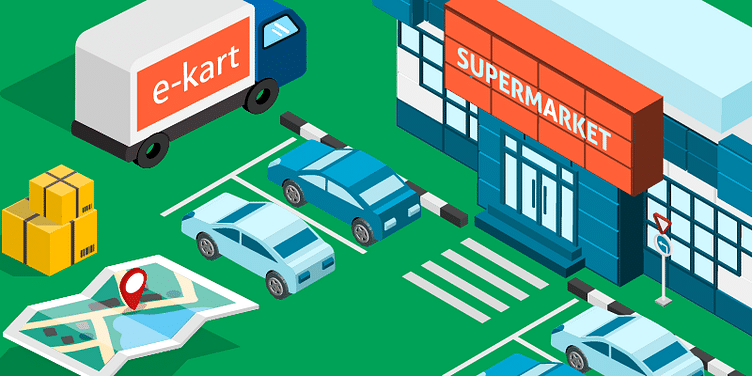 In a move that is bound to transform the logistics industry in India, Flipkart's logistics arm eKart is now going to serve non-e-commerce players as well. eKart confirmed the move with YourStory, just days after it announced its partnership with Paytm. It is currently in talks with Jabong and Shopclues to explore tie-ups, company sources add.

eKart will be harnessing its learning experience with grocery delivery service ‘Nearby’, which shut down recently, to look into food and grocery delivery. It is also in talks with large electronics and apparel brands. This step by eKart, many believe, could transform the way Indian e-commerce system functions.

The relevance of offline play

Those logistics players that did not think they could provide a relevant solution for non-e-commerce businesses may have lost out on this opportunity by focussing too much on e-commerce. This clearly would give eKart an edge over other logistics companies.

Consumer companies are also trying to take their products to households. According to consultant firm Alvarez & Marsal India Private Ltd, many offline players today lose close to 30 percent of their sales because their stocks do not reach the end retailer on time. This last-mile solution, therefore, will prove to be very relevant for them.

Amitesh Jha, Vice President, eKart explains how working for Flipkart over the years has helped the company strengthen its offering. He says, “Over the years, eKart has been working towards understanding and solving the various inefficiencies and supply-chain issues Flipkart faces. With time we believe that we have built a robust system that can work as a business enabler and help provide efficiency for different businesses.”

Despite its recent devaluation by Morgan & Stanley, Flipkart is still ranked as one of the largest e-commerce players in the country. In terms of scale, eKart is believed to be the largest e-commerce-focussed logistics firm. By opening up to non-e-commerce players, grocery and even C2C courier service, it is taking a step towards what many logistics players are already doing in the US.

However, Manish Saigal, Managing Director, Alvarez & Marsal India Private Ltd, adds that one of the biggest issues in the industry is achieving economies of scale. eKart has already achieved that economy of scale in several centres.

Can eKart get the big boys?

Does this mean that eKart may even tie up with its parent company’s rival Snapdeal? One cannot deny the volumes that Amazon and Snapdeal can contribute. Comparing eKart to Alipay, Amitesh explains that while Alibaba may be in competition with several players, its payment gateway and wing aren't in competition. “This idea might take some time for the industry and ecosystem to understand; but it is a common global phenomena,” he says.

Even if Snapdeal [which has partnered with 20 third party logistics players] and Amazon [which has its own in-house logistics system] shy away from associating with eKart, smaller players do not see Flipkart as competition. They would be more worried about ensuring their data is not leaked or misused. So, the governance structure and control around using their data on transactions and movements will help eKart gain adequate trust.

Another challenge would be building the network; eKart has largely focussed on last-mile delivery so far. There is still some way to go to setting up its own surface network.

Can eKart create a robust line-haul?

Today, most big logistics companies have already started building their own line-haul network. eKart is currently looking at different data and algorithms to figure out the best service providers. Amitesh adds that they have been able to figure out an ecosystem solution for the line-haul.

Sudhanshu Gupta, Vice President, Paytm, says that his company has created a technology platform that integrates different national and regional courier partners to provide a countrywide reach to sellers, making the model efficient. eKart, which acts as an independent third-party logistics provider, will join Paytm’s list of other courier partners, like Delhivery, Gojavas and Bluedart.

“The volume allocation, however, will happen through smart routing algorithms based on implied cost and performance on each route by a courier partner. It is not possible to comment on what that percentage would be,” adds Sudhanshu.

Small cities and economies of scale

Delhivery, DTDC, BlueDart and Ecom Express are all present in small and big cities but they are focussed on building their networks in smaller cities. eKart, however, believes that its network has a mix of Tier I, II and III cities, making it imperative to be efficient and effective from day one.

Ecom Express, in fact, has set up a fairly good network in the North East, which is usually a difficult terrain for logistics companies. Lots of companies that want to survive in east India typically come to Ecom Express as they have a good network and charge good rates, as the market isn’t very competitive.

“eKart will need to learn to deal with these issues, because they have not focussed a lot on small cities. In small cities, their challenge lies in volume from beyond Flipkart, to get the right economy of scale,” adds Manish.

Now, Flipkart’s growth plans are hinging on the small cities. In the next five years, it is expecting 60 percent of its volume from thousands of small cities. This trend will grow: even smaller retailers are going to focus on Tier II and Tier III more.

Logistics providers like The Porter welcome eKart’s move. Pranav Goel, Co-founder, Porter, says that every company that has its own logistics house has started outsourcing services to other players as well. Transport companies have started to outsource their services to other e-commerce players as well as offline ones, similar to what eKart is doing in India.

“eKart provides a platform for small sellers to sell their items and handle end-to-end fulfillment. Offline sellers will add to this,” says Pranav.

The game of logistics

Speed of delivery is as important as the product quality for a customer. It would not be wrong to say that logistics could be the defining factor for success of e-commerce companies in retaining their customers.

At present, the country’s logistics industry is worth $300 billion, according to the ‘Logistics Market in India 2015-2020’ by market researcher Novonous. In fact, the report states that the Indian logistics market itself is estimated to grow at a CAGR of 12.17 percent by 2020.

Innovations are very important in this sector, as the demand is always for more reach and faster shipping at lower costs. Yet, the companies will need to invest in automation, while utilising existing resources well.