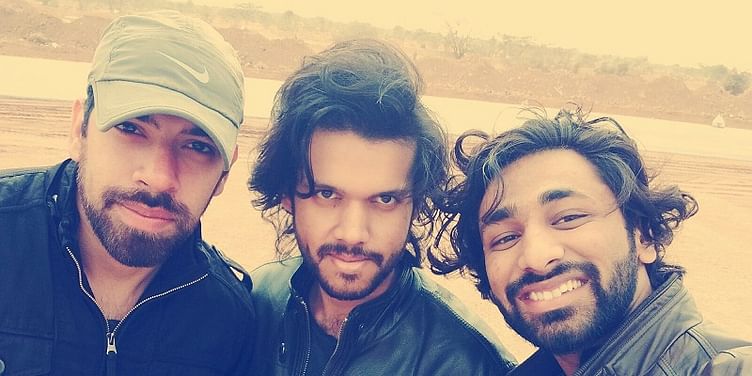 Raghav Sharma (27) was bitten by the writing bug early in life.

Finally succumbing to his desire, he quit his two-year-old job at Infosys in 2014, to start his own flipbook magazine, The Wounded Tiger. But his passion had a roadblock and he had to shut down his business owing to his inability to curate good content, causing him to miss out on the target audience.

But this fallback became the main ingredient in his next venture. In February last year, Raghav, with Ravi Piplani (28), an ex-colleague, and NIT graduate Himanshu Agarwal (25), chose to start content sourcing and publishing platform Kalaage.

Calling it a first-of-its-kind platform, Kalaage is a platform that helps writers and publications interact and connect.

Publications, including magazines and newspapers, are finding it increasingly difficult to source content for their user-dependent sections. This costs them loads of money and precious time to be wasted in the process. Further, writers and users are sharing their work online without getting much value, mileage or recognition from it.

This is the era of uploading content. After awhile, the content uploaded by millions of users on social media doesn’t grow. So we thought of building a content platform where you don’t just upload your work but also get a chance to send it to magazines and newspapers for publishing, while increasing the value and outreach attached to it.

So how do users get a chance to get published?

At present, this is used mostly for magazine and newspaper (weekend) supplements. The other type is a normal upload where users can just pen down their thoughts and share it for general reading, just like Medium or other platforms.

Further, if publications like a certain individual’s work they can get in touch with the writer to explore more opportunities in the future.

Kalaage is powered by its own proprietary backend which Ravi built without the use of Wordpress or any other platform. The Kalaage platform also integrates with the backend of publications (through APIs) to provide a submission management system along with editing and reviewing capabilities, just like Word or Google Docs.

The venture charges publications on a monthly basis with a subscription plan. Divided between Basic, Pro and Plus, the pricing ranges from $60, $80 and $100. The subscription is based on the number of topics tossed by a publication in a month.

The basic plan allows publications to publish four content pieces per month, with this increasing to four and ten as the plan advances. Also, magazine-promoting e-mailers are added to the advanced plans.

According to the founders, the platform hosts 3,000 users, of which 1,700 are writers, with the rest being readers. Forty-five users have been published via the platform as of now, by the 14 publications on board. Kalaage is adding roughly 100 users every month onto its platform. Some of the notable brands include The Statesman and HT Media.

In the next year, the founders are planning to increase their footprint by offering a mobile app and entering to the international markets. They are planning to target geographies like India, UK, Canada as well as Africa where readership tends to be high.

Currently supporting only Hindi and English, the firm is planning to expand into other regional languages of Tamil, Bengali and Urdu by the end of this year. They are also looking at foreign languages like Swahili.

For Raghav and his team the larger vision is to make the art of writing a serious proposition. He says,

Most of us do not to take writing seriously, since they don’t see value in it much. But with the proposition of getting published, more and more people may join the network and take it seriously

According to a report titled ‘Proliferation of Indian Languages on Internet’ by IAMAI, the industry body claims that the local language content on the Internet will lead to a growth of 39 percent in the current Internet user base. Additionally, 75 percent growth will be from the rural users while only 16 percent growth will come from urban India.

The report claims that in the last year alone Hindi content on the web has grown by about 94 percent, whereas English content has grown only 19 percent.

Accessing the Internet in local languages pose two broad challenges. First is generating content in local languages and popularising such content for broader adoption. While the second being on the technical front, pertaining to availability of Indian scripts for generating digital content. Both these challenges are addressed through the rise of content platforms, like Kalaage, which are aiming at higher engagement and inclusion rates.

Moreover, the founders say that India alone has 80,000 registered newspapers in the country with high potential to scale, showcasing immense business opportunities for content business in the country.