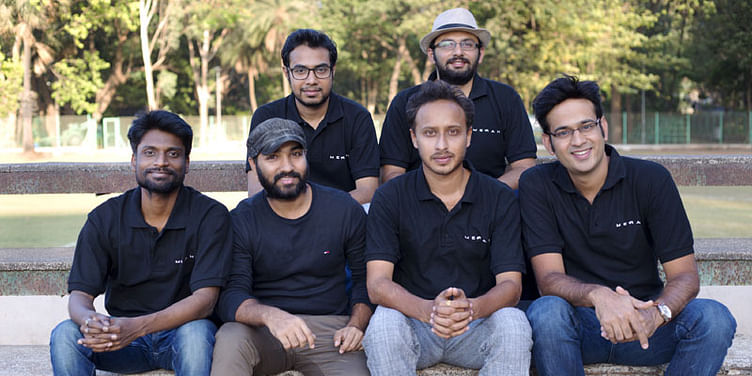 Until recently, virtual reality (VR), as a concept, seemed to belong to a distant future riddled with robots and machines. But Meraki and a few other companies in India show that the technology is already here, in 2016, bringing to life any visual experience.

Started in November 2015 by Arvind Ghorwal, Sairam Sagiraju, Parth Choksi and Agam Garg, Meraki is one of India’s first VR content production studios for consumers as well as businesses. They create 360-degree videos and films for events, tourism, sports, adventure, advertisements, experiential marketing, real estate, weddings, news and fiction. The company's expertise lies in ideating and producing VR content from end to end so that people can consume content in complete immersion.

Based in Mumbai, the team aims to utilise the latest visual technology and innovation, to develop storytelling and film craft, and change the way visual content is consumed.

Parth says, “Virtual Reality has the potential to spike a sense of presence and awareness in audiences and thus stir up a heightened dose of emotional engagement. Our aim is to create exciting content that emotionally connects with our audience, while we push the boundaries of VR.”

The beginning of Meraki

An Ujjain boy, Arvind first explored filmmaking in IIT-Bombay. His love for it led to him making a lot of short films and documentaries that have won him numerous awards. To pursue the visual language of films and images further, he joined Housing and set up their Imagery and Aerial teams from scratch. While there, he was exposed to VR. His intrigue for the medium, combined with his passion for filmmaking, motivated Arvind to go on an entrepreneurial journey with Meraki.

Sairam is a film writer and director, who is best known for directing music videos for Grammy Award-winning album Winds of Samsara. Sairam has previously worked with Prime Focus Technologies where he developed a film data model, and Housing.com as Head of Content Production.

Parth, an IIT-Bombay alumnus, was a project engineer with ITC for two years. He previously co-founded LevoDrive, an intra-city public bus transport system with Agam Garg.

An IIT Bombay alumnus, Agam has worn many hats. He has worked for Oracle and Credit Suisse in the past.

In addition to the founding team, there are two VR specialists and the team hires freelancers for individual projects.

In the short span since its conception, Meraki bagged six major projects from clients such as Star Sports, Network 18, Percept Pictures (Sunburn and Hardwell), and Channel V.

MerakiVR made its first appearance with a 360-degree concert film of musician Hardwell’s performance in Mumbai in December 2015.

Meraki's biggest project is the Asia Cup, which was held in February. The matches are yet to go live. They covered the in-stadium experiences of matches between India and Bangladesh and India and Pakistan at Mirpur, Dhaka. The India vs Bangladesh match that they captured was the world’s first cricket match in VR.

Alongside client projects, Meraki continuously strives to produce proprietary content using VR technology. A recent production is a short film 'Strangers Again' which was well received and is now available on Milk VR, a curated platform by Samsung.

Meraki is currently bootstrapped. Meraki has conducted workshops on VR in IIT Bombay and Vidyalankar School of Information Technology.

Ajay Lavakare, Co-President of Stanford Angels & Entrepreneurs India, believes that VR is no longer a future dream, but already one of the biggest technology trends for 2016.

VR hardware segment has seen a lot of action lately, with release of Samsung Gear VR and pre-orders having opened up for the consumer versions of Oculus Rift and HTC Vive. Experts expect the content creation VR market to explode in the near future. Some activity has been witnessed on VR game content side of things already.

Competition in the VR space

The VR space is not yet crowded but has seen a few startups. In November 2015, VR startup Absentia founded by BITS Pilani Goa undergrads had raised Rs 1.2 crore funding from Astarc Ventures, 50K Ventures, and other angels. Founded by a husband-wife duo last February, SmartVizX, a VR solutions startup raised over $500,000 from Indian Angel Network (IAN), Stanford Angels and Entrepreneurs India (SA&E India). This startup builds ‘immersive technology’ solutions using VR for real estate and other industries. SpectraVR is a VR media production and technology startup based in Mumbai and Bengaluru. GreyKernel uses VR and gamification for immersive education.

Even though VR adoption is currently at a minuscule level in India, many firms like Sony, Samsung, HTC, OnePlus have joined Facebook's Oculus platform in the VR space and are pretty close to a widespread adoption. Introduction of low cost headset will be one of the key steps in increasing the VR market size of India.

The founders of Meraki believe India is one of the key markets for VR, considering its huge smartphone base of 160 million plus users. Apart from content creation, Meraki is planning to leverage technology to create its own immersive productions.

With a lot of videos already on air, the team is now working on a UN-commissioned project with Grammy winning artiste Ricky Kej.