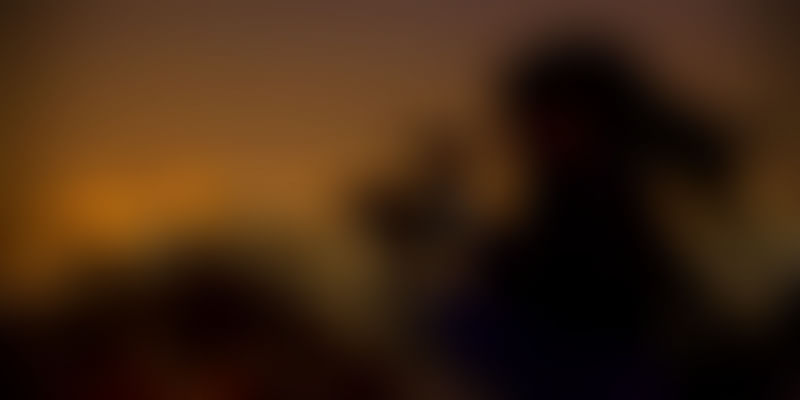 We know him as the adrenaline junkie who just woke up one morning and decided to cycle 2,120 kilometres from Kolkata to Mumbai. We know him as perhaps the most consequential kind of an improv artist who, while travelling with his heart bound in leather gloved clutches looking for thrills, noticed the deeply confusing and paradoxical misery that one would inadvertently witness on a road trip between any two of the most developed metros of our country, and turned his joyride into a rally for a cause.

For Siddharth Agarwal, that campaign was life-affirming. The people were good to him; as were the roads. But above all, his conscience was. It lay on a bed of roses, for he knew he couldn’t have channelised his fervour into anything more meaningful. Determined to strike suffering in its heart again, Siddharth was sifting through the sloppy seconds of the Great Indian development story yet another time, so he could come back for thirds of the grand outdoors.

A different sort of stealth-mode

This time, he has decided to dump the bike and use his own two paddlers to walk 3,000 kilometres following the course of the River Ganga in a span of four months, while shooting a documentary on all the life-forms he encounter along the way – be it the four-legged predators or the two-legged ones. Ask him why it is that he is fully placing his trust on his pair of flappers over a pair of wheels, and he weighs in with a beautiful observation.

“In the past I’ve cycled and walked long distances, learning a lot and in a very different fashion than one would expect. I particularly grew fond of walking because of the way it breaks down all barriers between the person walking and the local people. The very act of walking somehow makes you one of them, the barriers of language, of religion, inhibitions, and insecurities all gone when you’re so exposed, so very much similar to them in that moment. It has often been in these moments that people confess and express their truest feelings, giving you a clear understanding of things from their perspective.”

The objective, he states, is very straight forward. “We want to learn and narrate stories of the water and people along the banks of the river Ganga in an innovative and engaging manner. With the looming water crisis, it is high time we started to understand our water resources at a very personal level. So I decided to walk the length of the Ganga. The issues start with the condition of the river itself. The oxygen content, BOD or biological oxygen demand adversely affects marine life, especially the Gangetic dolphin. The heavy metal and microbial content deems it unfit for human usage. The causes for these are both urban sewage and other activities and heavy industrial pollution. Also, the construction of dams and barrages renders people homeless and becomes an unstable, unpredictable problem point. The effects are very visible in the form of displaced people because of dams in Uttarakhand and due to the Farakka barrage in Bengal. I also want to explore the role of dams and embankments in floods during monsoons.”

The walk kicks off in the first week of June 2016 from Sagar island in West Bengal, and he will make his way through some major points of interest at Kolkata, Farakka, Patna, Varanasi, Allahabad, Kanpur, Narora, Haridwar and Tehri, while on his way to Tapovan, adding up to roughly 3,000 kilometres. A more detailed route map will be available at a later stage on his website (www.veditum.org). He will be joined by a team of film makers who will be travelling the same route documenting the walk and the stories we encounter. “We’re hoping to bring out real stories that matter through the medium of this documentary, something that needs to be brought into the mainstream now!”

They want to get academic institutions, environmental organisations, startups and passionate individuals on board, for a mindshare on the matter. With support from all these entities and the wealth of experience gained on his last expedition, Siddharth hopes to have a fruitful run-in with the outdoors clocking the distance within four months. “There are a lot of lessons that the road teaches you, of determination, of spirit, of perseverance and when you’re in the grind it helps you learn a lot of life lessons too. The road is a great teacher, and it tells you again and again that it isn’t just about arriving, it is about the process.”

Whether cycling across India or walking across Rajasthan, they collected a lot of intel by virtue of being on-ground, right at the epicenter of an issue. They raised Rs 78,000 for CRY and Rs. 1,31,000 for Rang De on their cycling trip, and Rs 1,57,000 for Rang De while walking across Rajasthan. “We helped push for small cultural movements in some of the places that I visited on these trips. We’re essentially a drop in the ocean, but eventually every drop counts.”

Make his story, yours

This time around, Siddharth is gunning for backing from corporates, startups, and other research firms to have a more fool-proof implementation strategy. “Starting from water-related data, we can assist with studies of policy reach and implementation at the ground level. We can also help new organisations test their wearable tech or apparel on the field. The possibilities are endless. But we will not allow any sort of vested interests to dictate the narrative of the documentary.” They are also hoping to raise funds from individuals, because it increases the number of stake holders that are directly part of this story.

When he is not burning some rubber for a cause, Siddharth is doing the grind in setting up his new non-profit organisation by the name ‘Veditum’, where they will be showcasing meaningful content through the data they collect on field through projects such as this. “Our major focus areas are society, culture and environment. We hope to introduce young people to the realities and problems that plague our society through active participation in our projects, making them more conscious and empathetic individuals.”

If you want to be a part of his story, write to him at asid@veditum.org, or contribute to his fundraising campaign here.