With a $600 humanoid, Sirena Tech aims to make robots the 'next smartphone' 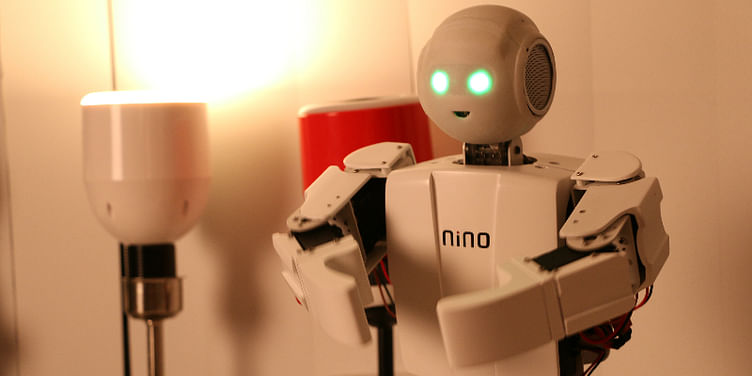 Over the past few weeks, the world quickly went from going gaga to becoming sceptical about ‘virtual bots’ and their potential applications. But the world of IoT and robotics has been going strong for the past few years and it has the potential to make an even bigger real-world impact.

Indian company Sirena Technologies has developed a humanoid robot- with design, research and development (R&D) and manufacturing done in India at a low price tag of $600(eventually), while Libre Wireless has been developing a suite of wireless technology solutions which power WiFi speakers and LED lamps. With these innovations, Sirena Tech aim to revolutionise the world of education, research and make robotics more mainstream.

Libre Wireless was founded in 2013 by Hariharan Bojan (VP Engineering & India Operations), Hooman Kashef (CEO) and Jordan Watters (Chief Revenue Officer), a bunch of colleagues who had earlier built a streaming audio product- Bridge Co India. As it got acquired by an MNC, the trio chose to move out and build their next media streaming platform, with Libre Wireless.

I started Sirena Technologies and Libre Wireless with a vision to impact the education system in India through technology (robotics) and also to create affordable high-end products for the Indian market - WiFi speakers, power plugs, LED lamps with speakers and in general IoT (Internet of Things) products.

With their humanoid- Nino, soon to be launched in India, Sirena’s goal is to make it the most affordable global product in the niche robotics category it is going after. Sirena aims to position its humanoid as a teaching tool or assistant for technical colleges and universities where students can learn, experiment and develop new technology and innovations around it. For school students, the humanoid can assist the teacher by narrating stories, singing nursery rhymes etc. So, Sirena is also positioning its technology as a content distribution platform for publishers.

We are the first company from India to develop a servo motor or actuator- SiReef, which is a key element in any robot.

Currently, SiReef 1.0 has been designed for medium torque(~2 Nm) and for personal robotic requirements. The team has laid out a roadmap till October 2017. Its long-term vision is to develop a more advanced servo that possesses higher torque and can be used for general purpose robots and also robots with special joints.

Coming to IoT products, Libre has designed and developed complete WiFi multi-room audio solution from India, which can be operated through iOS and Android apps. With the goal of bringing IoT to audio, Libre has seen great success with in products like LED lamps and speakers. While introducing GoogleCast for audio last year, Libre Wireless was recognised as the official system integrator. Then in September 2015, Marvell, a global producer of semiconductor products and Libre announced that they had joined forces to work on WiFi/Bluetooth IoT technologies and homekit applications.Hariharan said,

We are connected to some of the best ODM/manufacturing companies in China. We work with the very best of brands and partners, including Google and Apple.

With offices in Bengaluru, US, China and Japan and funded by VCs from across the world, Libre Wireless claims to be close to breaking even this year. There are about 100 employees and a huge ecosystem driving everything. The humanoid division at Sirena is being run by 20 employees from vast disciplines. Looking back at their journey so far, Hariharan said,

The progress in the last one year has been phenomenal. We have a working model now which we could start deploying in schools and colleges. No other company globally has built a humanoid platform within a year and at a price point (lesser than $600 eventually) that we are going to sell at.

Working on complex robotics and IoT systems with quick go-to market times of a few months can be challenging. So, Sirena Technologies and Libre Wireless have a seven-day weekend work culture with almost zero HR policies to give employees the freedom to work on their own terms. Libre and Sirena believe in open and flat organisational model, with minimal managers.

Robotics is considered to be a big disruptive technology with continuously increasing demand for both industrial and service robotics. A recent report by Research and Markets estimates that the global industrial robotics market was $28.22 billion in 2014 and is forecasted to reach $41.18 billion by 2020 at a CAGR of 6.5 percent for the period.

Sirena Tech, though, is going after a niche robotic market that is still in its early stage with its humanoid bot. Alphabet, Samsung, Rethink Robotics, Softbank Robotics and Toyota are some of the established giants that have keen interest in this space.

On the other hand, McKinsey estimates that the IoT market could have $11-trillion impact by 2025. Utilising IoT effectively has the potential to reduce maintenance costs by upto 25 percent, cut unplanned outages by upto 50 percent, and extend the lives of robots and machines by years. So there are multiple synergistic areas where Libre Wireless and Sirena Tech can leverage their strengths.

In the long term, Sirena envisions a world where we will bring robots into our homes as assistants and companions. Gurmeet said,

Our end goal is to make robots so affordable, that everyone would like to buy one, the way we own a smartphone today. We plan to bring robots to sub Rs One-lakh level, and then subsequently to Rs 50,000 as and when volumes grow.

Adding to its current range of products, Libre aims to come out with more products in its Wi Fi multi room portfolio, in the coming years with WiFi adapter for audio systems and WiFi power plugs, which are currently in design phase.

Sirena, on the other hand, has started signing MOUs with Indian engineering institutes, Jain University being the first, to build and maintain robotic and IoT labs for them. They have also started receiving orders for their humanoid bot- Nino and are shipping their first order to Surabhi Public School in Bengaluru.