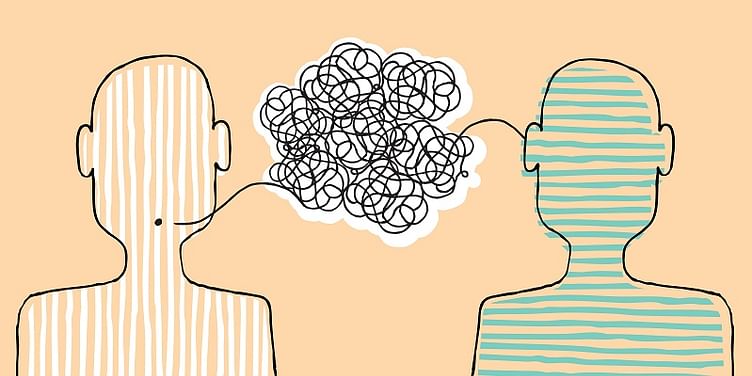 In the past four years since we launched our startup, we have worked directly with over 200 people, sold to more than 150 customers, spoken to hundreds of investors and had conversations for 40 minutes (or longer) with thousands of people. As co-founders, we have had to sit on various teams inside the company – engineering, sales, marketing, operations and even design. We have all interacted with lawyers (very tough!), worked with accountants, negotiated with vendors (including our previous chaiwalla) and dealt with hundreds of other types of people. There was one surprising aspect that cuts across all these functions — effective communication.

So what is communication?

As you can see in the above illustration, there are multiple aspects of communication. There is a sender, who has some intent. He or she creates a message and sends it over a medium, which has ‘noise’. The receiver gets the message, creates a perception and then responds. There are two components of a message: verbal (which you hear or speak) and non-verbal (which is related to body language and is equally important).

So, a seemingly innocuous process of two people talking is, in fact, highly complex. There are multiple points of failure — the sender may not send the right message; his or her body language may be incorrect; there might be too much noise; and the receiver might not be in the right state of mind to receive the message. It is not just about ‘sending’ your message; it’s equally about making sure that the other person ‘gets’ it.

Coming back to the point, effective communication is the single most important skill that one can develop. It can help you to win customers, get funding, form allies, and get almost any task done!

The most common excuse these days is either, “I had told him to do this but he didn’t do it,” or “I did it right, but that guy messed it up.”

The problem is that most of us speak to convince and not communicate. The moment that you accept that failed communication is as much your fault as that of the other person, then your problem is solved.

Communication is not always about talking

Effective communication is not just about speaking well; it’s equally about listening. A good communicator speaks only 30% of the time and listens for the rest. You would be surprised by all the new things that you would learn by focusing less on hammering your message and more on listening to what the other person has to say.

The above illustration shows that each person lives in his or her own reality. This is the context in which they exist and it influences how they perceive things. Let’s illustrate this with an example.

When we were children, we would sit in a circle and play the following game: one person would think of a message and whisper it to the person besides him or her, who then whispered it to the next person, and so on. At the end of the circle, the last person would say aloud what he or she had heard. When we started the game, the message was, “My mom doesn’t take me to the shop because they sell interesting things to kids.” By the time the message was passed around the circle, it ended up being, “My mom works in a shop that sells kids.” The problem was that each person sitting in the circle heard or perceived the message within their own reality; there were disturbances in the communication channel; and the perception of reality differed from one person to the next. Hence, by the time a message went around a circle, it had been changed and lost its original meaning.

Even something as tangible as writing code involves communication. What do you think it is like when someone else reads your code and then has to work on top of it? It’s communication. Only the medium is non-verbal. That’s why great programmers write comments to make their code more readable.

So the next time you feel agitated because someone didn’t do what you asked them to do, ask yourself if the communication was uniform on both sides of the conversation.

Effective communication is not only critical at your work life, but also in your personal life. It can help you win hearts, make someone feel special and add warmth in your relationships.

There is a simple technique to communicate more effectively. Every time that you are about to say something, pause for five seconds and think if there’s a better way to say it, and speak that instead.