Why Flipkart deferring placements by six months is such a BIG DEAL? 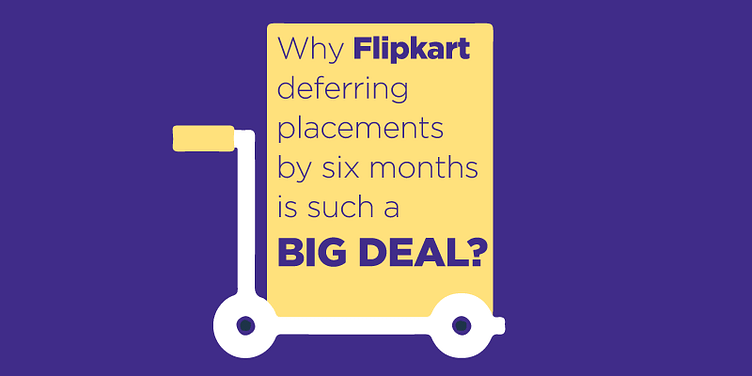 In 2009, many global companies deferred placements, including the likes of McKinsey at ISB, etc. What I don’t remember from back then is the sense of outrage that Flipkart’s decision has triggered. Maybe it was because, in 2009, the world was reeling in the aftermath of the credit crisis – it was almost as if the prevailing circumstances gave the big names a legitimate reason for doing what they did. We were almost sympathetic all around. The placements process stayed subdued way for a while. Companies didn’t turn up with offers, and pre-placement offers were canceled or “deferred” (which many thought was just a euphemism for withdrawing existing offers).

My point is, isn't it natural for companies to change plans, especially in a world that is changing almost every month, if not every day? And yet, Flipkart’s announcement spread like wildfire, igniting speculation and talk about how this is wrong on so many levels. The discussion invariably turns to the so-called trouble brewing at Flipkart. (But that’s another story for another time.)

What I am genuinely looking for are answers to questions that I think we all need to consider.

Why is the onus of fulfilling a commitment ‘made in good faith’ only on employers? I have seen so many people in my circle who switch jobs within a month of joining, and many (even from IIMs) who don't even join a company after accepting an offer.

If anything, they should be the first to understand the harsh realities of business cycles, because a few years down the line, many of them might well have to take these harsh decisions themselves.

Also read: How thick-skinned are you?

Shit happens, how do you, left in the lurch, deal with it and move on? Will the headlines and all the news analysis, etc. lead to Flipkart retracting the move? That seems doubtful. By now, Flipkart must have developed a thick skin – there aren’t many choices you have when an entire country waits to see which wrong move you make next. Look ahead. Crying to the media about this won’t achieve much. The buzz is temporary. The public concern will fizzle out when the next big story comes along. Look for solutions beyond the spotlight.

Why do we all like to speculate so much? Why is one act overanalyzed as if there are so many layers to this action? Why can’t we understand it as a journey, which will have its moments? Flipkart has been one of the top recruiters over the years, when investment banks had fallen, companies like Flipkart took over as preferred placement partners for institutes of higher education.

Why can’t we let them have one round of deferred placements when they have created jobs for so many, every year, over the last few years?