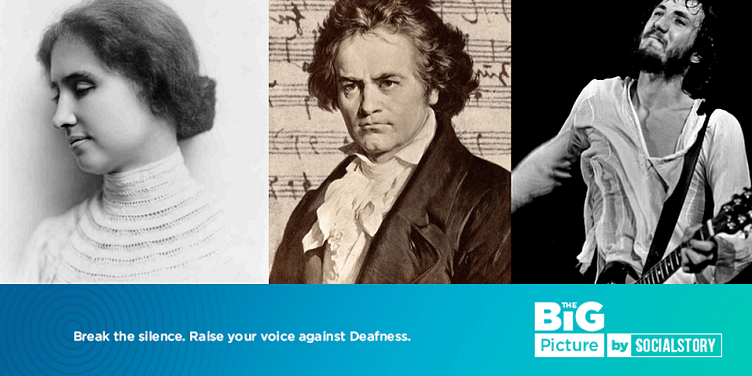 Deafness is a serious problem. While science and technology are gradually conquering the medical front of the issue, the social stigma and myths associated with the ailment continue to challenge our collective goal of becoming a caring and benevolent society.

The people with hearing impairments are often individuals who are cast aside by the society. There are myths surrounding them which makes the situation worse. For example, it is often believed that children born to the deaf are deaf, which is not true. Ninety percent of children born to deaf adults can hear normally. The rest can be treated permanently. Children of Deaf Adults (CODA) are often exceptionally sharp due to ease with which they navigate the world of the deaf and the hearing alike. However, due to the social and cultural rejection deaf face in our society, they continue to drift into their world of quiet isolation and become vulnerable to mental breakdown.

We at SocialStory believe that the deaf must be heard, and are hence running a month-long campaign to end the society’s collective silence on deafness. The wrongly-held beliefs about deaf people being invalid individuals of the society are unjust, and we hope that we evolve into a society where the deaf receive the empathy and care they deserve.

Today, we present to you a list of individuals you must have heard or read about already, but probably didn’t know about their partial or complete deafness. These are individuals who excelled and changed the world for good. Read on –

The famous American author, activist, and lecturer lost her ability to see and hear at a young age. At the age of 19 months, Helen suffered from an illness which left her deaf and blind. Without succumbing to her troubles, Helen went on to become the first hearing and visually-challenged person in the world to earn a Bachelor of Arts degree. An advocate for people with disabilities, Helen was also a socialist and championed for women’s suffrage and labor rights in the US. The famous Hollywood film The Miracle Worker was based on her life, which was later remade into Black in Hindi.

One of the most famous and influential composers of all time, Beethoven lost his ability to hear when he was just 28 years old. He suffered from a fit induced by a rage he felt when his work was interrupted. Having fallen over, he got up to find himself deaf. Beethoven conquered his disability and went on to compose some of the greatest masterpieces of music. His hearing loss, however, made playing at concerts increasingly difficult for him. At the end of the premiere of his famous Ninth Symphony, he had to be turned around to see the thundering applause of the audience because he couldn’t hear.

The legendary American inventor had developed hearing problems at an early age. The cause of his deafness has been attributed to a bout of scarlet fever during childhood and recurring untreated middle-ear infections. Unmoved by his disability, Edison went on to develop many devices that greatly influenced life around the world, including the phonograph, the motion picture camera, and the electric light bulb. Edison’s groundbreaking work and research continues to have a widespread impact on our lives. Many thriving modern industries including sound recording, cinema, mass communication, and telecommunications owe their innovation to Edison.

The legendary Spanish surrealist filmmaker and poet, often hailed as a pioneer of the sound film, had turned deaf during his later years. Bunuel, however, continued to assert control over the sound effects in his films and is often considered one of the first professional sound designers in cinema. Scholar Sally Faulkner has described the means by which, in his film Tristana, Buñuel “engineers a kind of figurative deafness, or disability, in the spectator” in scenes that involve deaf characters, by, for example, combining the sound of gushing water with an image of a stagnant pool, or exaggerating the volume level of chiming bells.

Considered one of the greatest rock guitarists of all time, The Who rocker Pete Townshend is also a singer, songwriter, composer, and writer. Pete suffers from partial deafness and tinnitus believed to be the result of noise-induced hearing loss from his extensive exposure to loud music. Pete blames his hearing loss on a lifetime spent using headphones. Once living in the fear of ending his songwriting career, Pete now takes help from experts while composing music.

The bestselling American novelist, short-story writer, and screenwriter was deaf, a fact he successfully concealed from the world and his employers for a very long time. At a time in history when deaf people were almost automatically considered as lacking intellectual acuity, Harold travelled the world extensively and became a wealthy man. After authoring multiple bestsellers, at the age of 61, Harold published an article titled The Short Autobiography of a Deaf Man, through which he told the public how he had struggled early in life as a result of a hearing impairment. He died in his mansion in New York a few months later.

We hope this list of people who surmounted their impairment to conquer heights inspired you. Please write to us your opinion and feedback about deafness. What do you think that we as a society should do to help the deaf community? What should we do to help bring out the Beethoven and the Edison living among us in quiet rejection? Please write to us at social@yourstory.com.