A shaman inspired this 17-year-old million-dollar heir to renounce everything, become a yogi, and startup a worldwide chain of 'happiness' studios 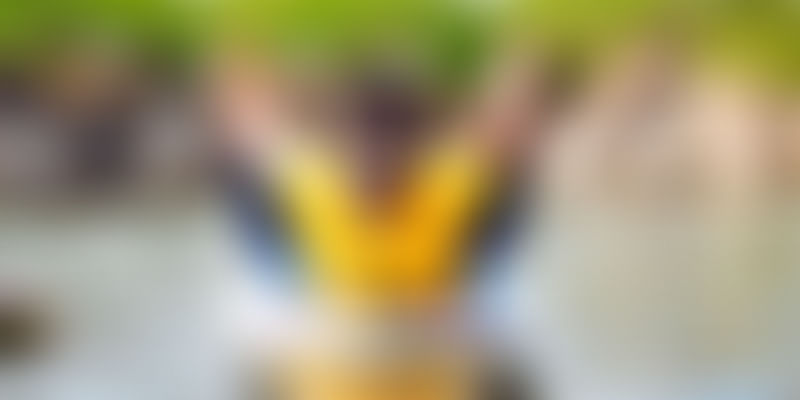 “Who are you?” I ask Sarvesh Shashi straightaway, for I know him to be someone who has internalised several identities, each more watertight than the last. And as the charismatic young man greets me with an odd sense of endearment and familiarity, I immediately understand how - he has the knack of making his own everything he sets his eyes on and everyone he meets. Would he open with, "So, I am the son of a wealthy Chennai tycoon who imported the World Trade Centre when it fell"? Would he say, "I am a college dropout who went on tour with the Indian Premier League and almost played for the country”? Unexpectedly and to my delectation, he replied, "I am just a guy who stumbled upon the religion of happiness, and pledged his life to spreading it."

Sarvesh, now 23, has a rags-to-riches story of his own: it may not have so much to do with his outward belongings, as it does with his karmic possessions inwards. “I know most startup stories have a founder sleeping on the roads, but I claim nothing of that sort," he says.

Sarvesh lived to perform, excelled at every sport he experimented with, played cricket professionally for his school and his State, Tamil Nadu, and was steps away from that dream every little boy dreams, but only those fated 11 achieve – being on tour with the IPL.

But there was something else about him that wasn't like your average 17-year-old. He was hungry and inquisitive. And serendipitously enough, the answer presented itself in an odd turn of events. “I was very intrigued about what enlightenment and sixth sense is. Around then, my dad took up yoga, and paid for a guruji to come over. But he couldn't complete the course and asked me to take the remaining classes," Sarvesh says.

He got his life's greatest lesson in the course of the training. ‘If you think I can enlighten you, you’re a fool and I am a bigger fool,’ said the shaman to a child who then understood perhaps the simplest yet most evasive principle to live life by.

His guruji saw the spark in him, and started giving him implausible tasks – observing 40 days silence, celibacy, abstinence from all forms of entertainment, no fancy clothes. Sarvesh explains,

I followed the five precepts: no non-vegetarian food, smoking, drinking or other vices, to establish control over my senses.

He knew then, that he had started on his path to self-discovery. One fine day, his Guruji called him over and told him he wanted to release a book with him called ‘Right-Brain Management.’

If we don't have a base, who will buy our book? For who is Sarvesh, and who is guruji?

Creating the 'Room of Requirement'

That 'base' is what we have come to know today, as the chain of ‘happiness' hubs, that over 650 people have come to crave as their second homes - 'Zorba: A Renaissance Studio.'

“I told my father, the only help I need from him is the space," Sarvesh explains. He took an unsecured loan from his uncle, and drew a spartan plan with an initial budget is Rs 5 lakh, which the keyed-up team overshot by Rs 12 lakh.

The first Zorba opened late 2013, at Mount Road, Chennai, and stood like an oasis in the din. "We didn't want to make it a yoga studio - we wanted to convey that this is one's happy place.” Zorba construed disciplines like zumba, yoga, aerobics, meditation into novel training programmes, amounting to 14 different forms of yoga, 12 forms of meditation, 122 types of pranayama, various dance fitness modules, and dance meditation, added a spin to their names, and the modules spread like wildfire.

“This got to my immature 21-year-old head, and I took off to Udaipur for May and June," he adds.

As it happened, the company wasn't ready to stand on its own two feet yet. “We hit the lowest point. Hardly two registrations in two months, my balance went down to minus Rs 3,000. My dad yelled at me for being so irresponsible. I ran back to Chennai," he quips.

The next fortnight was a blur and in 20 days. 6:30 am-7:45 am, Sarvesh would take class, after which, the broom beckoned. He would clean, step outside, register a person, park someone’s car, and come back and take class again. In 20 days, he brought the balance up to Rs.3.2 lakhs. Fun fact - Sarvesh still follows that routine, when he is not traveling the world to crack global deals for Zorba.

Sarvesh then wanted to focus on honing one studio, but the opportunity to open up a second one beckoned and his father insisted he take it. So, in 10 months, they opened up a branch at Harrington Road. By June last year, they had a third in Anna Nagar.

“One fine day, my dad read the valuation of Flipkart in ET, and asked me, 'why can’t your name come here?'," Sarvesh recalls. Humouring the idea, Sarvesh went to various valuation companies to get a sense of where he stood.

While meeting companies to get a valuation, his friends at a Dandekar Capital connected him to the gym chain Talwalkars, which was looking into investing in alternative fitness. “They didn't seem keen, but gave me a five-minute meeting that turned into a two-and-a-half-hour meeting and an offer to buy 50 percent stake. I was skeptical at first, as they wanted to start 100 studios around the world in 18 months,” Sarvesh says.

He took it. Little did he know his world was about to be upturned- for the better.

“Seven immediately, and fifty-one studios eventually, across Bombay, Hyderabad, Kolkata, Guwahati, Kochin, Bengaluru, and Amritsar in three months,” he rattles off. That was the target they were chasing.

Hot yoga, paddleboat yoga, and posture correction were three of the many new disciplines they were introducing in India.

Additionally, he had other tie-ups: a book, in association with tarot card reader Pankhuri Agarwal, a line of organic yoga party wear, with Swathi Jagannathan, and the next Zorba in Chennai as a multipurpose zone with a coffee shop and sports arena.

With 650 registered members in the existing three studios, their youngest student is six and the oldest is 87. “Zorba has healed cancer. We haven’t cured it, but we have improved the reports of a patient drastically. People come and tell me that the only god they know is Zorba. We’ve treated diabetes, healed thyroid, lowered cholesterol, cured fibroids and depression,” Sarvesh says.

The hungry yogi who has a past filled with dance and sport, still moonlights as a cricket aspirant. “I do want to make a comeback and play for the country," he adds, as an afterthought.

“Oh, and that valuation, the whole reason we got into all this,” he messages me all casually, later that night, “is Rs 100 crore.”