At this Bengaluru café, time literally costs you money 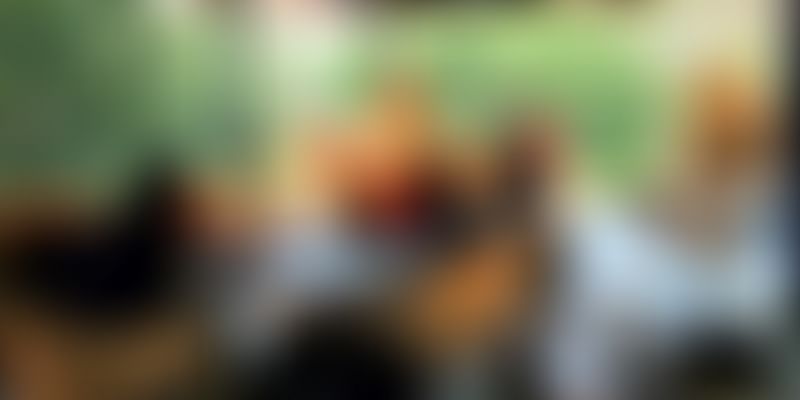 In Victorian England, coffee houses were the birthplace of renaissance. Revolutions began at the coffee tables of men of intellect and political aficionados.

Two centuries later, world over, coffee houses continued to be places of banter. The quality of conversations might have changed, but coffee houses – more popularly known as cafés – are still ideal spots for meetings, official and informal. Chains like Starbucks and Café Coffee Day let individuals work out of their outlets, with free wifi but expensive coffee.

India’s startup hub Bengaluru plays hosts to not only entrepreneurs but also some very charming cafes, both for food and the welcoming ambience. But how much innovation can happen on a café after all? Dialogues Cafe is the answer. A curious disruption in the coffee house space, Dialogues Café is situated in Koramangala. Time is the currency in Dialogues Café. You can have as much snacks as you want, enjoy the free wifi, and even relax with a book in a comfortable arm chair or bean bag – and you pay only for the time spent there. They charge Rs 190 for the first hour and then Rs 3 per minute, at a maximum charge of Rs 1,000 for a day. There is a weekly plan for Rs 3,400, and monthly plan for Rs 6,900 per head.

Dialogues Cafe is not your ordinary place where you chill with your friends having overpriced coffee and food. Among the unique traits of this café is the permission to order food from outside, or bring your own tiffin. Dialogues Café has a reading room, conference room, smokers’ corner, open air lower deck, and café area. The business model was born out of its co-founder’s idea of a workplace.

Ankit Gupta and Saurabh Priya, both 29, met at HEC Paris where they were pursuing their MBA a year ago. Ankit is an IIT-Dhanbad (earlier ISM) alumnus from Delhi. Saurabh (originally from Gaya) graduated from RV College in Bengaluru, and went on to work in Cisco before moving to London Business School from where he went to Paris. When the two friends decided to start up back home in India, they considered sectors like travel, child security, luxury ecommerce, etc., before finalising on hospitality. And the twist in the tale came from Ankit, who had worked as a mining engineer in Australia for six years.

Ankit “was living inside a shell” at Moranbah, a small town in Queensland. Despite the easy life and job security at BHP Billiton, he got bored after a while. When he came back to India, he did not want another corporate job – “I am used to mine fields, not cubicles. I wanted a build a place to plug the gap,” he says. Startups usually use co-working spaces. Ankit adds “We wanted to give similar facilities with better environment; hence this fusion of library, café, and co-working space.”

His co-founder Saurabh is a Bengaluru boy. Once they found the location, they shifted to a house together, and even designed the café themselves. Saurabh in fact designed everything tech – including sales software, CCTV, the website, and network layout for wifi. At an initial investment of Rs 25 lakh from their personal savings, they opened the café last month with no marketing campaign except in social media.

When Ankit first presented the idea to family and friends, nobody responded that it will or will not work. But everyone found it an interesting concept. The aim was to give the customers their own space, and a pleasant ambience with nobody to disturb. “We bought books from a street vendor for Rs 12,000. At our reading corner, guests can exchange books too. Many leave one of their own books here and take one from here with them,” says Ankit. He adds that a lot of people volunteer here, giving free classes in music, dance, cooking, painting, and photography.

Bengaluru already plays host to cafes and bars which have gone beyond their name tags. For instance, Koramangala has Coffee on Canvas, which showcases and sells drawings as well as provides books and board games; Atta Galatta, which even stages plays and seminars; and Claytopia where you can do ceramic painting. A few kilometres away, rooftop bar Humming Tree Indira Nagar also serves as stage for plays, music performances, and seminars. The not-so-glamorous Banaswadi in fact has ‘The Minute Bistro’, a concept similar to Dialogues Café, although without food from outside their café and charging Rs 5 per minute. Globally, such cafes are still few in number – London’s acclaimed Ziferblat is one of them. A community-oriented social experiment, Ziferblat hosts board-game nights, and workshops for creative writers and queer makeup artists.

The scalability of Dialogues Café model is yet to be seen – Ankit and Saurabh have a reason to be optimistic: Bengaluru loves everything new; everything different.