How to get an Ivy League education from India 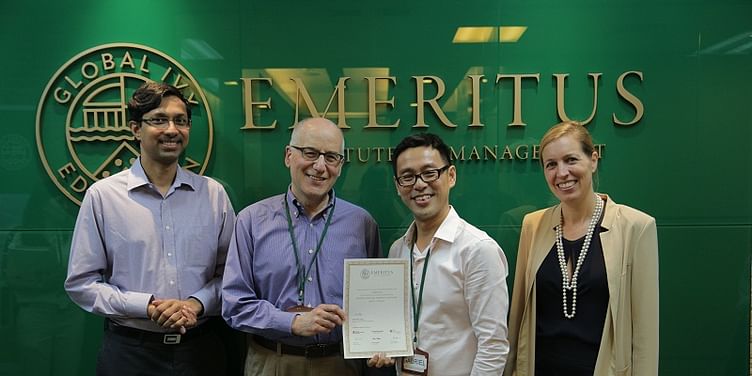 There are over 30 million students in higher education - in India - and over 16 percent of them take distance education courses. Most of these students do not get any access to training or teachers for project work. They just appear for the exams at the end of the semester. Ninety-five percent of these students study on a last minute basis and end up completing the course. But, they go away with no knowledge of its application. Then to become employable, these students end up taking three-month online courses where the same problem persists. Ashwin Damera started Emeritus Institute of Management - in January 2016 - to solve this very problem of accountability in the system, where students are finally measured on their course work through the intervention of an online teaching mechanism. The Emeritus technology platform brings global higher education to the Asian region. Its founding schools are MIT Sloan, Columbia Business School, and Tuck Executive Education. What more these are IVY leagues courses that several Indians can access.

Ashwin always had the spirit of entrepreneurship. He began as a Chartered Accountant in 1999 and later went on to work in CitiBank for a brief period. He completed his MBA from Harvard Business School in 2005. In 2006, he started TravelGuru, which was an online hotel aggregator. The business was then sold to Travelocity in 2010 after which he jumped into starting an online education company called Eruditus. This company exists to this day and it delivers global executive programmes by partnering with Indian colleges. But Ashwin realised that by using the online medium he could bring mainstream education programmes of IVY Leagues schools into the Asian region.

“The biggest problem we are trying to solve is access to quality education. Let’s look at the numbers: 200,000 people take CAT every year in India to get into the IIMs. But the top IIMs have less than 10,000 seats,” says Ashwin, Member of the Academic and Examination board of Emeritus Institute of Management. He says this platform is great for the rest because it can give them access to high quality education.

Emeritus.org follows the SPOC (small private online course) model and not the MOOC (massively online open course) model, which are three-month courses offered by various startups. MOOC models see completion rates that hover at 40 percent, whereas Emeritus courses see 80 percent completion rates. This is a key differentiator. “We want to attract serious students and give them education with quality learning outcomes,” says Ashwin. The pedagogy and curriculum is set by the three founding academic institutions – MIT Sloan, Columbia Business School and Tuck at Dartmouth.

The key differentiators include:

The competition for Emeritus will be from Vedantu, Jigsaw Academy. and Edureka. But these are companies that offer short-term courses to upgrade technical skills. Technically, there is no competition because Emeritus brings PG Diploma courses from the top three Ivy League schools.

A recent FICCI – EY report stated that there are 30 million Indians enrolled in higher education. Now let’s assume that India’s gross enrolment ratio of 22 percent needs to increase to match China’s 31 percent, in the next five years. That’s an additional 15 million students to educate, a staggering number. Brick and mortar education is not the solution to meet the needs of 15 million students. This is the challenge and the opportunity.

Emeritus has raised an undisclosed sum of capital from faculty and alumni of top business schools such as MIT, Stanford, Harvard Business School, and INSEAD. Over the last six months, the firm has signed up 4,000 students from more than 35 countries. About 40 percent of our students are from India. The plan is to reach more than 50000 students in 18 months.

“Education is always an opportunity, there have not been many companies that have scaled up,” says R Natarajan, CFO of Helion Ventures.

What has the company done in six months?

Ashwin says that the first six months has been spent in focusing on content creation, getting the team in place, and taking the first few courses to market. Currently, Emeritus is running a MIT course on Design Thinking. There are 120 students from 12 countries who have generated 185 new product ideas and received 4,996 suggestions from their cohort. The ideas ranged from child education in remote areas, precision agriculture, applying virtual reality to work outs, compost indicating garbage bags, and shower water recycling. This is the kind of impact Emeritus expects education to make on society.