The ‘Reverse-Bucket-List’ of Two Pune brothers:  Completely waterless car-washes to cope with drought 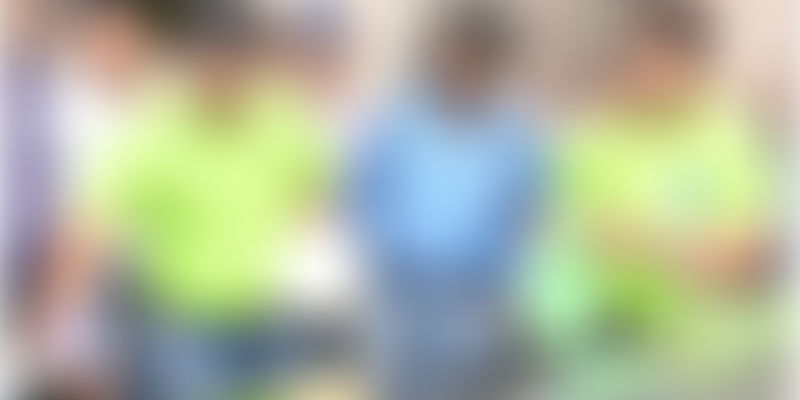 Fact: Pune has more than 27 lakh vehicles plying on roads, out of which five lakh are privately-owned four-wheelers and 22 lakh two-wheelers.

Fact: Pune has been wasting almost 270–300 crore litres of water every year in cleaning these privately-owned cars. Almost 30‑35 percent of itis potable water that can be used for more pressing needs such as drinking, cooking, agriculture, etc.

Fact: After two consecutive droughts in Maharashtra, the Pune administration’s water supply is falling short in the face of increasing demand from the burgeoning population.

Fact: Conventional car cleaning with water, as it turns out, is bad news for your car anyway.

Fact: Cars can be cleaned in a better, faster, and greener way without a drop of water. And two brothers of Pune have brought that technology to India, and are offering this service at your doorstep.

Coming from a middle-class in Amaravati ‑a town in Vidharbha, where the water shortage is perennial‑ Akshay and Ninad Dhok had been taught to respect water throughout their childhood.

Akshay studied Hotel Management and spent 10 years in the industry. Ninad did Mechanical Engineering with a post-graduate diploma in International Business, and built a career in international business and market development.

“For one of my assignments in 2011–2012, I was in the Bay area in California. Incidentally, this was the time when the Bay Area was hit with the worst-ever drought in 100 years. I had seen the efforts the local municipal bodies took to create awareness about conserving water. Cleaning cars with water was banned and people adopted the waterless car cleaning methodology instantly. Their dedication to the cause was inspirational. I started exploring idea of setting this up in India," says Ninad.

In his research, he found that typically a 25-litre water bucket is used to wash the car. “Most likely, it is borewell water. And the same water is used and reused to wash multiple cars, so, the dirt in it creates numerous micro scratches, which irreversibly damages the exterior paint of the car. If this is how you are “washing” your car, you are actually paying to damage your car exterior,” explains Ninad.

He shared his findings with Akshay, who was instantly on-board with the plan of finding an alternate method. Together, they spent two years exploring solutions. But, when Punekars started experiencing water shortage following two consecutive dry spells of rain in September 2015, they kick-started work on their idea.“This year, the government has already declared more than 30,000 villages and 11 states under severe drought,” Akshay informs us, adding, “and while we are faced with this dire shortage of water, billions of litres of water are being wasted on washing cars everyday around the globe. Assuming each vehicle takes around 10 litres of water on an average on a single wash, we are talking about wastage of 150 lakh litres of water nearly every day. We wanted to contribute to sustainable living, so, we came up with a concept that not only revolutionises the process of washing cars, but also helps greatly in conserving water.”

With all these concerns in mind, they decided to give a “Green Salute”to India– a company that provides waterless car care services.“The idea behind this game-changing service offering is that we can replace traditional daily car cleaning method and make the car cleaning process as a whole lot quicker, easier, less labor-intensive and green, whilst still giving it a better finish as compared to traditional car cleaning.”

Green Salute launched a service that would send a car-cleaning crew to a car owner’s location and wash the car using a waterless cleaning solution, sourced by them from the wholesale market. The solution has advanced surfactants, emulsifiers, and lubricants to effectively encapsulate the dirt particles and hold them away from the surface,which can eventually be removed with microfiber towels without water in no time, and will produce a scratch-free, swirl-free shine. All one needs to do is to spray and wipe off. “Our USP is that we offer a superior car wash at a reasonable cost starting from Rs 599 per month for a hatchback car, which includes fifteen exterior cleanses and two interior cleanses,” says Ninad.

This technology and methodology of waterless car cleaning has been in existence for more than two decades in the developed nations. In fact, many countries have already banned cleaning cars with water.

Setting up a pilot in limited areas of Pune, Green Salute approached societies, corporates and individuals and offered them free demos. “During the pilot, a general tendency of inertia and doubts while switching to the new way of doing things. But we demonstrated the benefits through live interactions, and in fact, had 56 percent of the on-lookers convert to customers.”

The pilot ran for over three months. “We started with a single activation at a society and only counted on word of mouth and referrals.We now service 62 members with a 100 percent retention month-over-month. We have delivered 1100 cleaning sessions, and are proud to say that we have saved 16,000 litres of water so far. Though the number is minuscule as of now, every drop counts.”

After the successful pilot, they formally launched earlier this month. They are looking at having 200–250 more enrolments in June, while targeting a minimum 10,000 vehicles by the end of this year with an average fee of Rs 650 per vehicle. “We are going to be a profitable venture from the year one.”

Raking in the greens

The car wash industry in US is worth $24 billion. “As the developed nations are DIY type of countries, mostly there are manufacturers and retailers of the product. Very few are going to the extent of providing a doorstep service.”

Funneling their personal funds into the venture, Green Salute has raised some funds from friends and family. One of their relatives, Geet Loney, has invested in them, and is joining in the capacity of CFO. They now have a footing in Pune’s Baner, Balewadi, Baner-Pashan Link Road and Pashan. “By January 2017, we plan to launch Green Salute pan-Pune and by end of 2017, we will expand to Hyderabad and Bengaluru. We are going to create physical hubs at every 10 km.”

Furthering their eco-friendly ideology, they launched ‘Salute Water’, wherein their cleaners use electric vehicles to commute to their customers’ cars. “Affirming our commitment to the environment, we will also start planting a tree for every customer who enrolls for our service from June 5, which is World Environment Day. We have tied up with some NGOs to support us for this drive.”