Using the kirana as a financial network - the future of banking 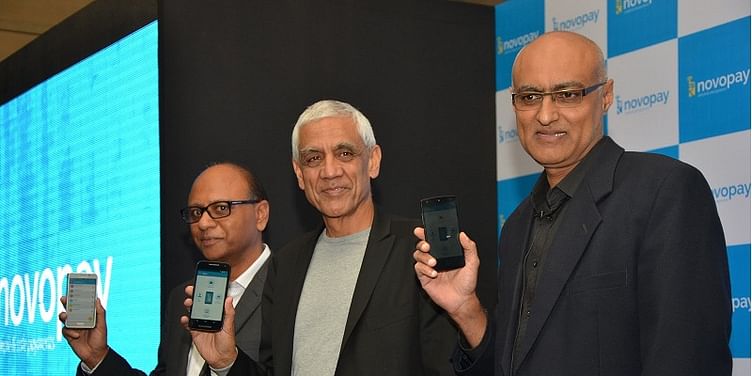 The biggest weapon in the world for a technology company is the way it looks at its data. Large companies like IBM or Infosys or SAP build network operations centres (NOC) to track data on a real-time basis. So, one would surmise that only a large company possesses the skill of handling data. But, if people visited the Novopay office on Sarjapur Road in Bengaluru, they would be pleasantly surprised that a startup has the ability to create an NOC to track all its associates and use the data to make its business better. An NOC uses the cloud to collect and manage massive amounts of data.

Novopay is a financial solutions startup founded in 2014 by Srikanth Nadamuni, Gautam Bandyopadhyay and Sridhar Rao to use the mobile as a medium to help the banking industry reach the long tail of consumers and retailers. Their proposition is simple; they want to use the Aadhaar-based unique identification numbers database, by issuing fingerprint scanners to the kirana stores to help consumers use kirana stores as money-deposit and fund-transfer centres. They have so far worked with more than 43,000 kirana stores across the country and all of them serve as banking outlets. The company has tied up with RBL, Axis Bank, IDFC and Bank of India to deliver its services through an app. For the mobile-savvy customers, Novopay allows them to pay bills through their mobile app.

Manjunatha, owner of Eshwar Medicals in Bengaluru, has paid Rs 10,000 as deposit to open an account with Novopay. His job is to take money from young workers – with or without bank accounts – and transfer cash to the accounts of their parents or family in their home towns. The money can be transferred to any bank account or even to a kirana store in the Novopay network where from the family could pick it up, by showing an SMS-based verification. Manjunatha’s store also doubles as an account, opening networks for Novopay’s partner banks. So how does the deposit money reduce or how can a top-up happen? Whenever the consumer deposits money, the retailer’s Novopay account reduces, and whenever the retailer transfers money from his account on behalf of the consumer he receives money at his cash till. At the end of every month, he can top up the Novopay account.

“This system has helped me increase my revenues by a third, because most often the customer buys something from the store during every transaction he makes,” says Manjunatha.

Novopay has been backed by Silicon Valley-based Vinod Khosla, the owner of Khosla Ventures, for an undisclosed sum. It wants to go after 400 million unbanked Indians and has created a business model to thrive on that segment.

Rating agency Crisil estimates that there are more than 50 million kirana retail outlets in the country. Novopay’s spend will be in acquiring these kiranas and acquiring more consumers. Today, the kirana stores carry advertisements of Novopay to attract customers to transfer or deposit money.

The team and the business model

Srikanth Nadhamuni is an industry veteran and a technocrat who was the former head of technology in the Aadhaar project, which has now registered over one billion Indians. “We wanted to build a business that was centred on technology, which used several delivery mechanisms to reach banking to the customer,” says Nadhamuni. He adds that the NOC enabled them to track merchants on a real-time basis and control the entire ecosystem of retailers and consumers.

The consumer is given complete protection of his money. When the money is being transferred he gets an SMS on his mobile number and the beneficiary also gets a message on his phone.

“Many in the country do not have access to net banking. Our solutions are going to cover all regions of the country and facilitate banking for all,” says Sridhar, who is also the veteran of the telecom industry.

The business works on a system of commissions, which Novopay charges the customer on each transaction. The company did not want to reveal this ecosystem, but usually the commission ecosystem is less than one percent and is shared by the bank, the retailer and Novopay.

According to KPMG, the payments industry is as big as $1 trillion. There are several companies that are dealing with financial payments, Paytm being the largest bill payment service in the country will over 100 million registered users. However, Paytm is yet to get into deep banking services and is only a prepaid wallet so far. The company has raised over $500 million from Alibaba and is now getting into the payments bank business. The RBI allows these outlets to collect deposits upto Rs one lakh, facilitate Internet banking and money transfers for customers ever since it received its licence last year. Eleven companies have, so far, received payment bank licences. But this is very different from what Novopay does, which facilitates small transfers and acts as an agent for the consumer to open accounts and deposit money in the bank account of the customer. Paytm is yet to record any operational profits and is burning cash. Other competitors are PhonePe, Freecharge and FonePaisa. But none of them have integrated Aadhaar intheir business and are still only in the realm of payments.

“These services work on very thin margins and the industry has to reach more people to turn profitable and takes several years to remain profitable,” says Mohandas Pai, MD of Aarin Capital.

But for now Novopay is silently working with the entire Indian kirana system to reach banking to those people who have not yet experienced banking services.