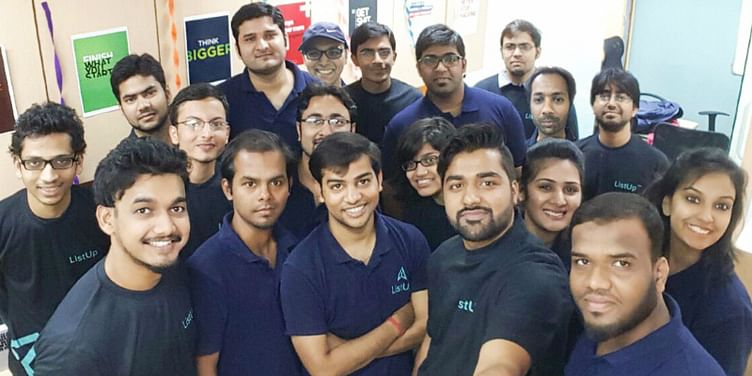 Mumbai-based ListUp, a peer to peer(P2P) buying and selling app, announced on Wednesday that it had raised $0.5 million in its seed round of funding led by Kae Capital with participation from Kunal Shah (Freecharge, Chairman) and Sandeep Tandon (Tandon Group). While speaking to YourStory, the founders mentioned that Sasha Mirchandani (Founder, Mumbai Angels) will be joining the board with this round of funding.

Founded by Sumit Gupta, Pulkit Gupta and Saurabh Jain, ListUp was launched in January 2016 with the aim of disrupting age-old classifieds in India.The startup is focused on P2P exchange of second hand goods and aims to make it easier for buyers and sellers using technology.

ListUp considers its location-based product discovery and social approach to classifield as its USPs compared to existing classifieds, where there is no real seller identity. Also ListUp ensures that all users on their platform are socially verified to ensure trust for the buying and selling process.

A mobile app only product centred around geographical proximity, ListUp enables discovery of interesting goods being sold in a neighborhood, thereby minimising the time between contacting the seller via direct chat and meeting them in person. The proximity and social verification also ensures quicker and safer transactions.

According to Google play, ListUp has over 10,000 installs and Sumit mentioned that they are seeing 100 percent month-on-month(MoM) growth in their user base. An average user(buyer) spends about 15 minutes per day on the app, while active sellers spend about 30 minutes per day. While they declined to provide exact numbers, ListUp estimated that they are witnessing 300 percent M0M growth in terms of product listings.

Sumit Gupta, Co-founder & CEO, ListUp, is excited about the opportunity ahead. He said,

This problem particularly excites me a lot, it’s is a huge opportunity in India and there’s lot more innovation that can be done in the used goods space using technology. In India, an average Indian hoards at least Rs 20,000 worth of items they don’t use anymore and we help to turn it into real cash.

Sumit, Pulkit and Saurabh represent an exceptional trio of scrappy entrepreneurs. What they have created at ListUp is an easy-to-use and fun way to buy and sell used-goods. In many ways, they are redefining the shopping experience for the large and rapidly growing market for used products.

The second hand buying and selling sector was estimated to be worth 1,15,000 crore in 2015. Quikr and OLX are among the most popular classifieds platforms in India because of the sheer volume of products.

Saurabh Pandey, ex COO at OLX noted, "The current crop of leading classifieds players will become obsolete soon. Close to a decade and still not more than 2-3% of active internet users use them. There is hardly any volume depth beyond top 4-5 cities."

Saurabh believes that the huge growth of e-commerce coupled with failing of horizontal classifieds indicates that a lot of things went wrong here. He believes that there is great potential in India for horizontal classifieds platform which is C2C, mobile first and has hyperlocal volumes and which can leverage gamification, social, push on usage, in such a way that creates a network effect.

On the global front, Mercari, a C2C marketplace app, recently became Japan’s first startup unicorn having raised a $75 million series D round. Singapore-based Carousell, which raised $6 million series A round from Sequoia Capital, Yahoo auctions and online auction and e-commerce giant eBay are other interesting players operating in this space.

ListUp looks to deploy the fresh funding for product enhancements such as utilising data to give personal recommendations, offline and online marketing and also creating network density in their target markets.

While Mumbai is currently their most popular market in terms of active users, the company is seeing good interest and activity from many other cities in India, without even having done localised marketing yet. Talking about their revenue model, Sumit noted,

Currently ListUp is free for both buyers and sellers. We have a revenue model in place and will be implementing them soon.

ListUp's long term goal in the next two years is to be the go-to platform where people in a locality or neighborhood could discover and sell products in the fastest possible way.