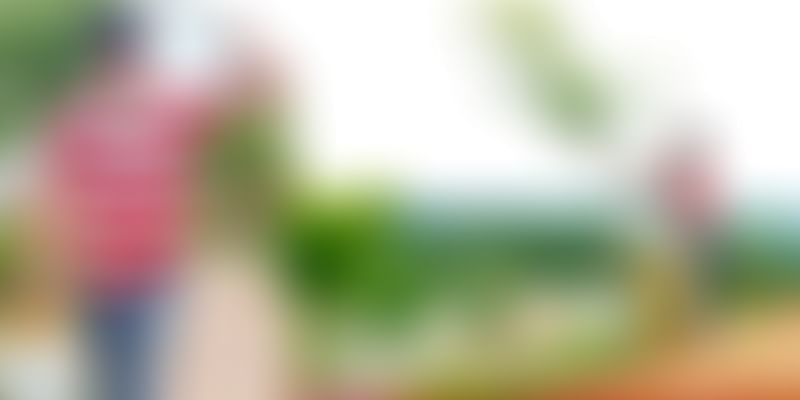 It took just one man to turn a rocky and parched hill, spread over few kilometres, into a lush green paradise. It took Ramesh Y five years of tireless work, but his efforts have born much fruit.

Ramesh is a 40-year-old graduate from Srirangapatna who abandoned studying law to take up small works to support his family. Eventually, he became a supplier of mineral water in Srirangapatna and nearby areas. He was a regular at the Venkataramanaswamy temple, nestled in Karighatta hills. But every time Ramesh went up the hill, it bothered him to find its scanty vegetation withering away in the heat. One day, he decided to do something about it.

“I could see a few plants around, but they obviously weren’t tended to. I built small bunds around each and watered them. It was quite a task, which I soon realised was also in vain. This wasn’t going to work. It was too hot and the water would seep in too fast,” Ramesh told The Times Of India.

Someone told him that drip irrigation was the best way to save the trees. But with his limited income, there was no way he could afford to lay pipelines around Karighatta, spread across 5-8 sq km. One day, when he was trying to junk an expired water can, an idea struck. “Why not use this for drip irrigation? I had plenty of such cans at my disposal. Using them would be cost-effective and would easily serve the purpose,” said Ramesh. The only investment would be the wires, and of course his time.

Once he knew how, he started selecting plants and tying the modified mineral water cans around them. He would cut off the bottom half of these cans and suspend them upside down, allowing the water to dribble out of the mouth. He also ensured that the drops didn’t go waste and fell on the roots. In a few days, it was clear that the plan was working. The greenery had started spreading.

“Once filled up, the cans could hold water at least for two to three days. This made my job easy and I extended the project to many more trees so that I could alternately water them,” said Ramesh. The blooming landscape not only pleased him, but also the birds in the area. The availability of water was a big draw for the winged visitors. But being the problem-solver that he is, Ramesh placed a stick inside the cans. Now the birds not only had a better grip, but also reach the water regardless of its level.

Ramesh is currently in the process of planting new saplings and hellbent to turn the area into a dense forest. “I go to the market once in a while to buy seeds for neem, jack fruit, tamarind, millettia pinnata and others. Not every seed sprouts, even my limited success over the course of time will bear fruit. My dream is to see this area converted into a dense forest. It will definitely help in increasing rainfall in this area,” said Ramesh.